Video: A 32 MPH All-Terrain Electric Skateboard Steered With a Kinect

One of the most fun Kinect hacks we’ve seen in a while gives the idea of motion capture a whole... 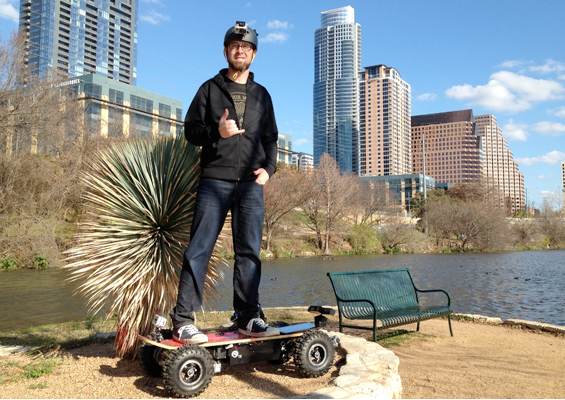 One of the most fun Kinect hacks we’ve seen in a while gives the idea of motion capture a whole new meaning. Behold the Board of Awesomeness, an all-terrain motorized longboard wired to a Kinect and a Samsung tablet running Windows 8. To roll ahead, the rider simply pushes his hand forward.

The system uses video and speech recognition, accelerometer and location data, and other factors to determine a rider’s next move. The Kinect transmits the rider’s movements to a voice-control-equipped Windows 8 tablet, which serves as the control center. The touchscreen turns the board on and off, manages speed settings (the motor has a top speed of 32 MPH) and visually monitors hand gestures, according to the brains at Chaotic Moon Labs, which designed the board.

It’s driven by an 800-watt electric motor, powered by a 36-volt power pack. A 12-volt battery powers the computers.

To get going, raise your hand and wait for the red dots from the Kinect. To go forward, push your hands forward; to slow down or stop, bring your hand back. Check it out in a video below. For more information on the board and a photo gallery of the build, head over to Chaotic Moon. 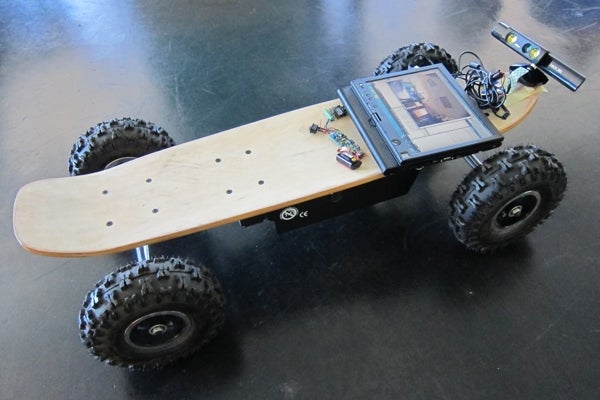