Silly Putty is pretty much the best non-Newtonian viscoelastic liquid we can think of–it stretches, it bounces, it transfers ink,... 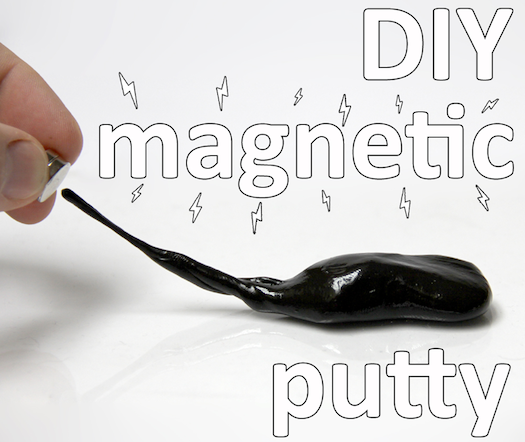 Silly Putty is pretty much the best non-Newtonian viscoelastic liquid we can think of–it stretches, it bounces, it transfers ink, it’s reminiscent of mussel fibers, and it can be broken with a sharp blow. But what if it’s blended with magnetic powder? Turns out magnetic Silly Putty has an unquenchable hunger for magnets.

Instructables posted a guide to creating your own magnetic Silly Putty. It’s pretty simple, basically requiring you to slowly fold ferric iron oxide powder (which can be found in art supply shops) into a clump of Silly Putty. After it’s been thoroughly magnetized (and dyed black, thanks to the powder), it will stretch and move like a thick liquid magnet, reaching to get to the small magnets used in this video.

It gets a bit unnerving when a magnet is placed directly on the side of the newly magnetic Silly Putty–the Putty seems to eat and then digest the magnet, pulling it inside itself in slow motion like some kind of unfathomable science-fiction horror creature. Make sure to watch until the end to see its creepiness on display.