Dancing a Song With the Full-Body Wiimote Music Controller Suit 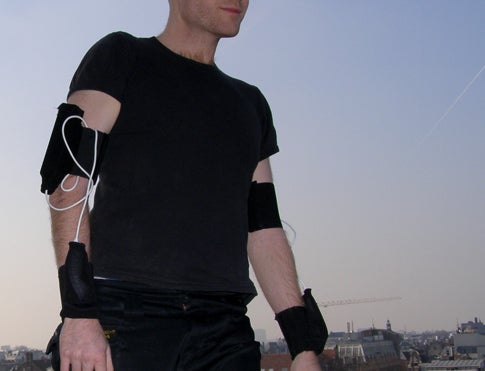 Soon after the Nintendo Wii’s release, hackers immediately began uncovering ways to use its unique motion-sensing controller to interface with other things—PCs, musical instruments, you name it. But Tom Tlalim, an Israeli-born composer who now lives in the Netherlands, may have outdone them all: His full-body, eight-piece “suit” of Wiimotes interfaces fully with custom software to turn his entire body into an electronic instrument that responds to his every motion. In his suit, Tlalim doesn’t play songs. He dances them.

“W_space,” as his suit has been christened, uses up to eight Wiimotes attached to the wearer’s arms and legs to form what is effectively a DIY motion-capture suit. The accelerometers on the Wii send tilt and acceleration readings to an open-source music synthesis software package called SuperCollider, for which Tlalim wrote a custom module that translates the data from W_space’s Wiimotes and allows them to manipulate and create sounds of various timbres in real time.

For Tlalim, the Wiimotes mean that he no longer needs to be hunched in front of a computer screen when he plays. 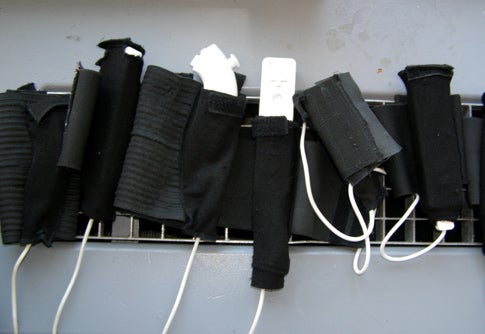 The Wiimotes and Nunchuk attachments fit into elastic sleeves.

“They’re allowing me to express myself, as a computer musician, more with my body, rather than the tips of my fingers,” says Tlalim, who also plays jazz guitar. “I’ve always been interested in developing my own ‘gestural’ devices to control computers – as a way to go back to the spontaneous act of picking up a guitar.”

The development process began a few months before the Wii’s November 2006 release. Tlalim was researching 3-dimensional rotation interfaces for audio software at Amsterdam’s Steim Institute at the time, and when the Wii came out, Tlalim realized that modding the mass-produced remote would be a lot cheaper than building his own device from scratch. When his homemade Theremin broke right before a prestigious gig at the Dutch Electronic Art Festival in April 2007, Tlalim decided to put his idea to the test. On the train on the way to his performance, he wrote the code for SuperCollider that allowed a single Wiimote to mimic the effects of the Theremin.

“I was pretty much coding it while we were sound-checking and just before we went onstage,” he says. “When we went onstage, it was the first time I got to try this instrument — and I can tell you that it was mind-boggling, for the audience and for me, to discover the world of sound that can come out of gesture.” He has performed several times since with the W_space, which has now grown to include as many as eight Wiimotes at a time.

Unlike the many gimmicky Wiimote mods that have surfaced, using the remote to make sounds creates genuinely new options for any musical form that encourages eclectic blending, from hip-hop and dance music to jazz and experimental composition. Dancers suddenly have the potential to be musicians in a way that wasn’t before possible.

At a September 2007 conference about Wii-controlled music at the Steim Institute, Tlalim and other electronic composers showed off their mods, as did the Dutch “WiiJ” Tim Groeneboom (aka WiiJ Timski), who uses the Wiimote to control the mixes as he roves through dance clubs.

Tlalim is currently collaborating on a W_space project with dancer Doron Hirsch and director Paola Tognazzi. The goal? Freeing electronic music performers from the keyboard and mouse, once and for all.

See Tlalim and W_space in action below. And for a closer look, see our photo gallery here. 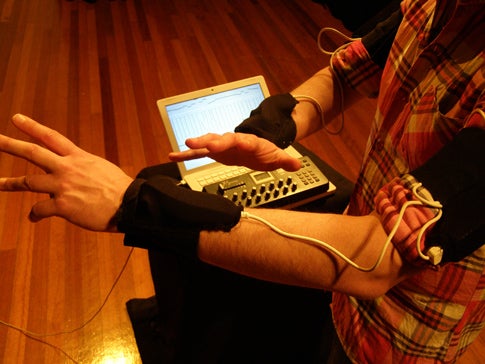 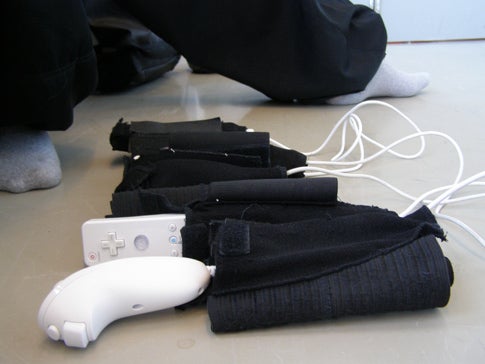 W_space: Ready to Suit Up

W_space can accommodate up to eight Wiimotes.

The Wiimotes and Nunchuk attachments fit into elastic sleeves. 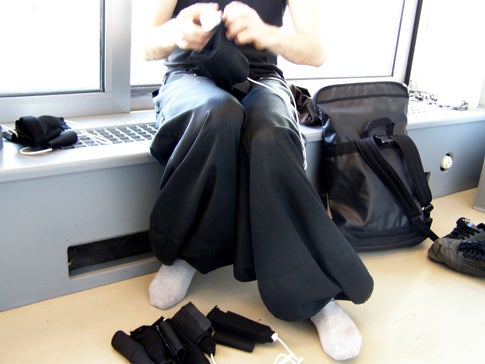 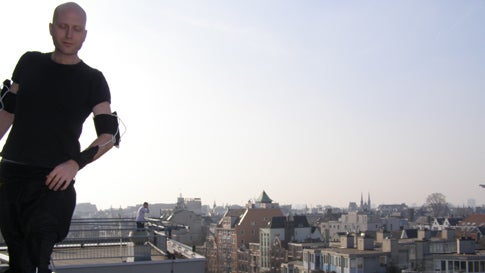