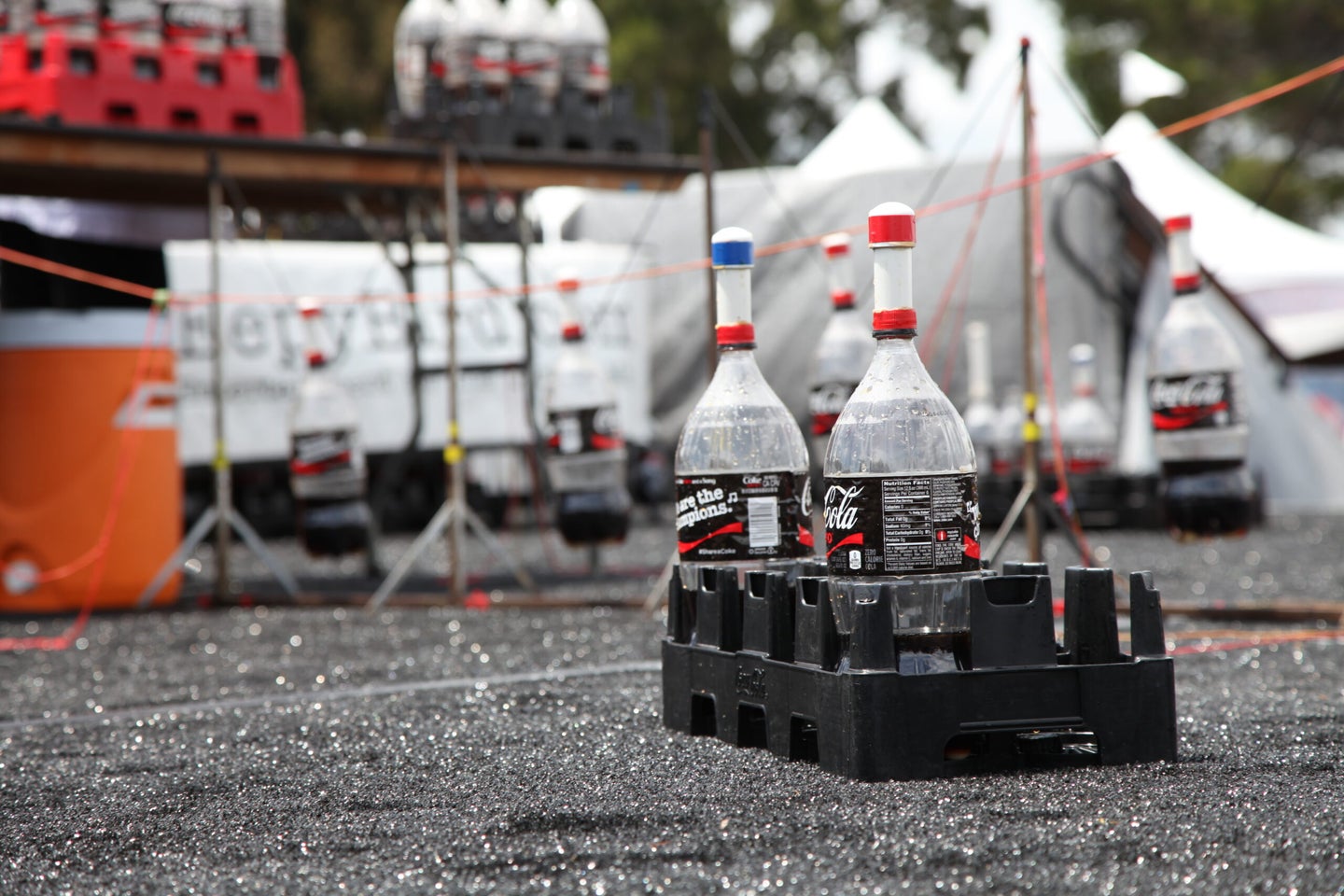 After the show, Grobe and Voltz give away every bottle. Jason Lederman
SHARE 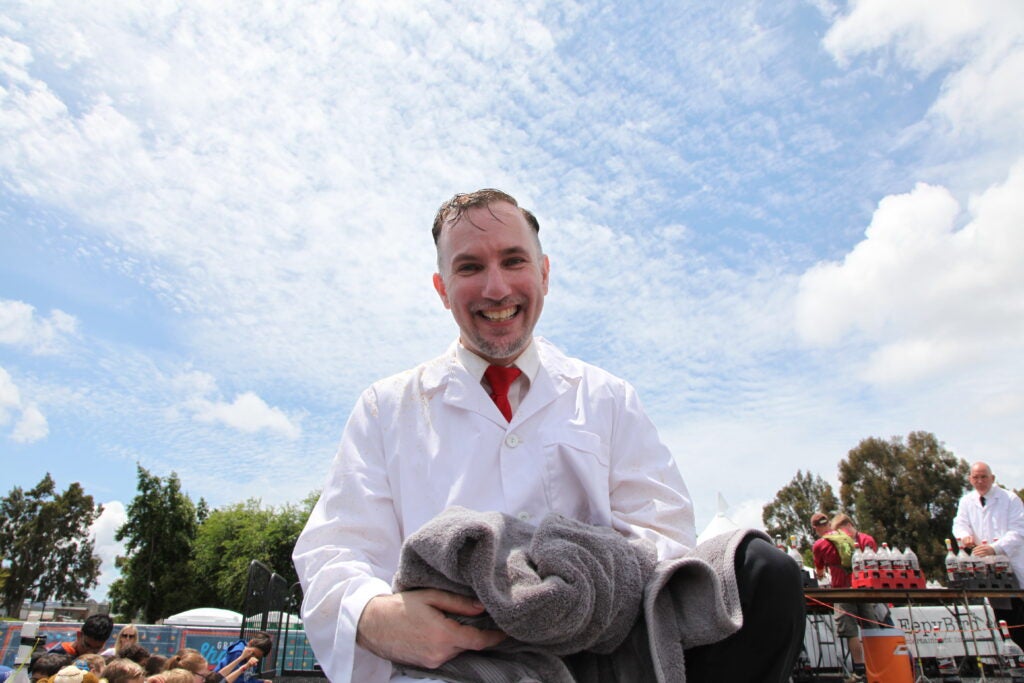 Soaked with Coke Zero after a show at Maker Faire 2016

Ten years ago today, on June 3, 2006, I was celebrating my 14th birthday and the end of my freshman year of high school. At the same time, professional juggler Fritz Grobe and attorney Stephen Voltz of EepyBird uploaded a video that would change their lives, and the internet, forever.

Yes, that’s the original Diet Coke and Mentos video. It was one of the first videos to go viral in the YouTube era (the video-sharing site launched just a year earlier) and is now considered a “classic.” There’s also a surprising amount of science behind the Coke and Mentos experiment, which is now well known thanks to EepyBird and the Mythbusters.

Imagine my surprise when I ran into the EepyBird guys at the 2016 Bay Area Maker Faire, and found out they’re still working with Diet Coke and Mentos 10 years later. They’ve picked up a few tricks along the way, as well as a few Guinness World Records (which have since been beaten), and were kind enough to share some of their knowledge with Popular Science.

Popular Science: How did you guys get started making Diet Coke and Mentos videos?

Stephen Voltz: A friend of mine told me about this crazy thing. He said “Do you know if you drop Mentos into Diet Coke you get a geyser?” And I said “No,” but I was going to visit Fritz that night, so I brought some.

Fritz Grobe: And we went out in the backyard, like I’m sure many of you have done, and thought “OK, this is really cool! Let’s get more!” So it was about six months later, and about six hundred bottles of soda later that we made our video.

SV: So we put the video online, we put up our new website, and we told exactly one person—my brother David. And then after doing that I’m checking the website to see if it’s up, if it’s crashed, and there’s a little view-counter by the video. And I say to Fritz, “Guess how many views we have?”

FG: And now the scary thing is that first video’s been seen over 100 million times. Absolutely crazy, all from telling just one person.

PS: What’s your favorite part of putting these live shows on?

FG: Oh, my goodness. My favorite part is getting to see the makers, meeting all these people. At Maker Faire, we meet our kindred spirits, the people who want to take things apart, see how they work, and they understand that science isn’t just something that you study. Science is something that you do, and that’s very inspiring to us.

SV: I think my favorite part is the people who come up to us after the show, especially the kids, and say “I’ve done that! I did that at home. We did that at my birthday party!” and have been inspired to go do stuff themselves and, hopefully, take it further than we have. 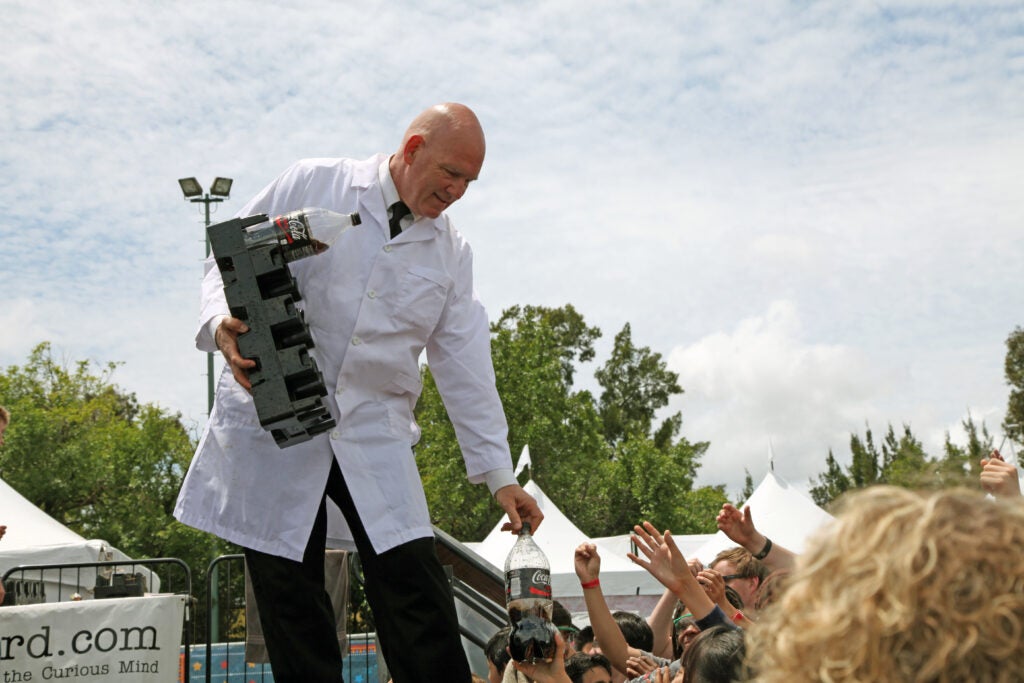 Voltz hands out Coke bottles after the show

Voltz and Grobe gave away every bottle of Coke they used after their performance. They did warn audiences though that the soda would be warm, flat, and have a minty taste.

PS: Have you had some memorable malfunctions over the last ten years?

FG: We have a few “memorable malfunctions” along the way. The first time we ever did Coke and Mentos live on television for G4, they put too much soda in the bottles. We were frantically running around and had to pour a half-inch of soda out of every bottle. It was down to the minute, down to the second. We were ready to go about 30 seconds before live television. It was totally terrifying!

PS: How many bottles was that?

FG: That performance had 156 bottles, which was more than we’d ever done before up to that point. It made it extra exciting.

SV: Neither did we, until that day!

PS: Are there any plans to set a new world record?

SV: No current plans. Our latest thinking is possibly Coke and Mentos in space.

FG: I think it’s time for Coke and Mentos in space. I think it needs to happen.

PS: Has that ever been done before?

SV: They’ve tried putting Coke and Mentos touching each other, to see what the reaction would be, but they’ve never, as far as we know, made a geyser or a jet. So we’ll see. 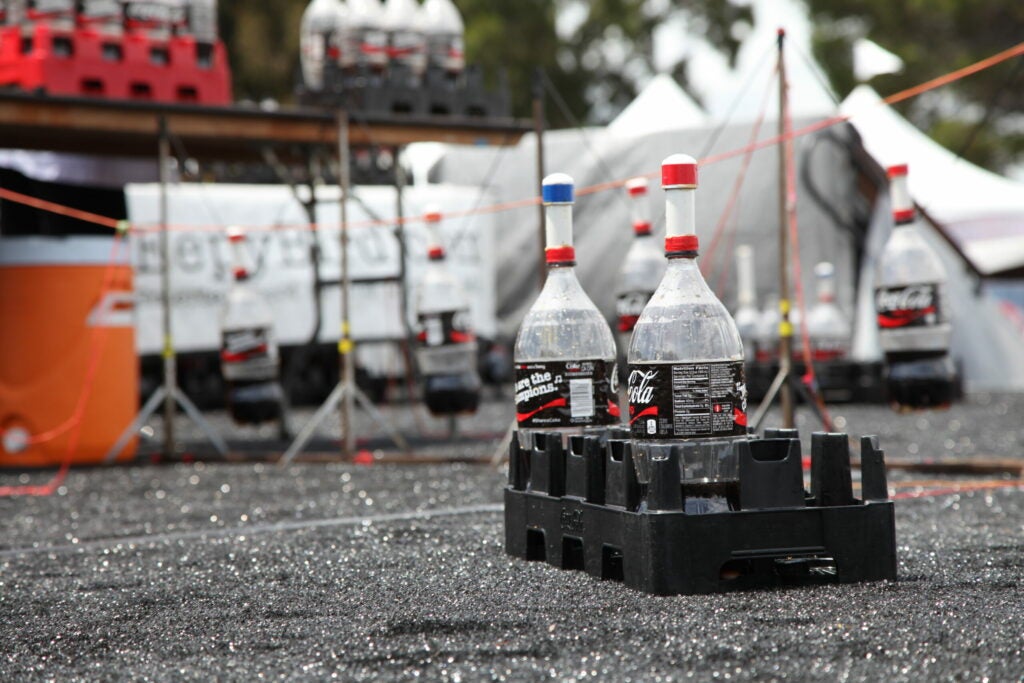 After the show, Grobe and Voltz give away every bottle.

PS: Did you imagine you’d still be doing this 10 years later?

FG: It’s been almost 10 years to the day since our first video dropped and we keep doing more crazy videos. We’ve been working for Coca-Cola, McDonald’s, OfficeMax, all kind of different companies, making videos over the years. And we’ve got some really crazy things planned for later this year.

PS: Can you give us a sneak peek of what to expect?

FG: Not yet. And we’ve also been playing around with giant mirrors. So we’ll see. We’ve got some really fun things going.

PS: Would you continue to do this for another 10 years?

FG: We figured this was going to be about 15 seconds of internet fame, dropping Mentos into bottles of Coke. Now, here we are at Maker Faire 10 years later, and we would love to keep doing this for as long as possible.