The Musician Who Built A Weather-Sensing Synth

Quintron and his Weather Warlock 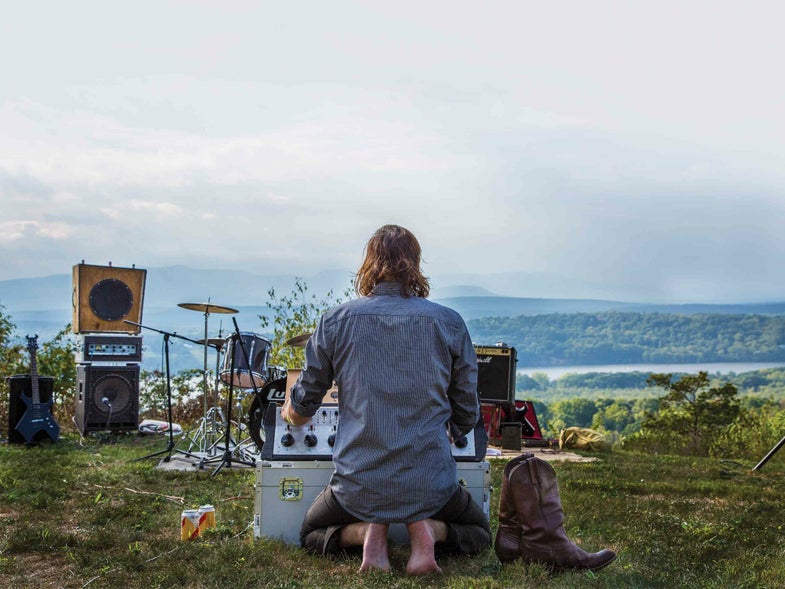 For nearly a decade, New Orleans organist and inventor David Rolston, better known as Quintron, had harbored a particular dream: to build a synthesizer controlled by the weather. As a touring musician, he could never find the time. And then, in 2011, he was diagnosed with lymphoma.

While undergoing chemotherapy, Quintron was stuck at home. “I spent much of the time on my front porch building prototypes,” he says. “It brought me peace during a dark time.” The resulting instrument, called the Weather Warlock, has sensors that detect sunlight, temperature, wind, and moisture. A custom circuit board transforms those weather patterns into droning noises.

Quintron tuned the synth to a harmonious chord—E major— and used intervals that are “mathematically sympathetic”: octaves, fifths, and major thirds. “The sounds the synth makes are harmonious and consonant, inspired by the healing state of mind that I was forced to be in,” he says. He hopes the Weather Warlock will help others too.

“Theoretically, blind people could experience a sunset through sound.”

“A lot of blind people cannot synchronize with cyclical changes in the day,” Quintron says. A live stream of the Weather Warlock’s music could change that. To share it, he built the website weatherfortheblind.org.

Quintron’s other creations include the Spit Machine, a hand organ that uses saliva in its circuitry, and the Disco Light Machine, which uses a drum and lights to create music.

But his most notable invention is the Drum Buddy, a rotating, light-activated drum machine that creates different rhythms and sound effects. Artists Laurie Anderson and Sean Lennon, and the New Orleans Museum of Art, have all purchased Drum Buddies. 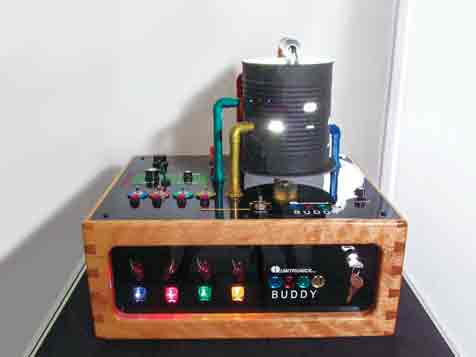 The instrument was born of necessity, Quintron says. “I wanted a synth that I could use to play and manipulate rhythms, while playing the organ with the other hand. That’s not something you can walk into a store and buy.”

This article was originally published in the March/April 2016 issue of Popular Science, under the title “Weather Maestro.”

A Closer Look at the Weather Warlock

All analog synthesizers shape and bend sounds using a combination of voltage-controlled circuits. In the case of the Weather Warlock, the voltage is increased or decreased based on the input of environmental sensors. As Quintron puts it, “Instead of using your hand to turn the voltage choke up and down, the weather is doing that for you.”

The sun, temperature, and wind sensors—which are mounted atop an 8-foot pole—connect, through PVC-encased cables, to the brains of the synth: a rewired radio mixer board. Hand-built circuits interpret the changes in the weather as sound.

“I experimented with different circuits before soldering them into place. It’s an extremely slow but meditative process that I’ve likened to playing an acoustic guitar,” he says.

The rain sensor works slightly differently. It uses the semiconductivity of rain to turn LED lights on and off. The LEDs then trigger light sensors, which turn sounds on and off. “Rainwater is wildly inconsistent in its conductivity, which means that you never know what sound you’re going to get. Just depends on the weather,” Quintron says.

New Orleans organist Quintron is best known for his cacophonous swamp-tech performances, which usually include his partner, puppeteer Miss Pussycat. Together the couple has performed around the world, from grizzled nightclubs across Europe to the Kennedy Center for the Performing Arts. But Quintron is also an inventor of musical instruments. His creations include the Drum Buddy, a light-oscillating drum machine, and, most recently, the Weather Warlock, a droning, weather-controlled synthesizer. Popular Science caught up with him on a break from his latest tour to talk analog advantages, believing in Santa Claus, and advice for inventors-to-be.

What led you to build your own instruments?

I’m a musician and wanted to make certain sounds with instruments that didn’t exist. The Drum Buddy, which is the first instrument I patented, derived from the fact that I wanted to play something with my right hand while playing pedals with my feet and bass lines on my left hand. I wanted something that made synth-y sounds that would not only accompany the Hammond organ, but could also make rhythms on its own. This was in the late 1990s, so all the cool analog-hybrid instruments, which regained favor in modern times, didn’t really exist back then. The Weather Warlock stemmed from that work.

What was the process of developing the Weather Warlock?

For many years, I had wanted to see if I could use weather-detecting circuits in an analog synthesizer. But it was a huge project—definitely not the kind of thing I had time to do as a touring musician. When I got cancer, I had a lot more time where I was homebound, and I spent much of it on my front porch building prototypes. The sounds the synth makes are harmonious and consonant and ever present, inspired by the healing state of mind that I was forced to be in at that time.

Where can we listen to the Weather Warlock?

Dronelike music streams all day every day at weatherfortheblind.org. For those who want to experience a dark, loud, kind of metal version of the Weather Warlock, we have an improvisational band, also called the Weather Warlock, and we perform with the synth in live shows. I also released a limited-edition record, Sunset Waits for No Man.

What’s the draw to analog sounds for you?

Well-crafted analog circuits have organic microlevel chaos going on that gives a life to the waveforms that digital can never, ever reproduce. To me, analog is the sound of capacitors leaking and charging, or physical elements heating up and cooling down. It’s natural; it’s alive. It will always be richer and deeper.

The first thing I ever invented when I was a kid was a booby trap for our entire house, essentially to disprove the existence of Santa Claus. It involved a lot of string and fishing wires, candy bars propped against doors—basically just things I found in the house. We didn’t have a chimney, so I knew if Santa entered any window or door, he would set off one of my traps. If none of the traps were set off in the morning, then I would know my mom and dad were Santa. But my dad, who was always one step ahead of me in everything, removed the entire contraption, so I was forced to accept, at least for a little longer, that Santa must be real.

How did you learn to build?

My dad is basically the living, breathing 10-volume set of “How Stuff Works.” He’s an engineer by trade but also a tinkerer with everything—automobiles, furniture, electronics. He allowed me to use his workshop from a very young age. He had kits of tools and drawers full of switches and buzzers and lightbulbs and batteries, and we were never made to be afraid of taking things apart, putting things back together, or building new things. In fact, it was encouraged.

Do you have any other inventions outside the musical realm?

I once invented a better ferret litter box. People say you can train ferrets to use a litter box like cats. That’s just not true. I basically invented a litter box that the ferrets didn’t know was a litter box. So nothing earth-shattering, just little things that solve some of life’s more-superficial problems.

Best and worst inventions of all time?

Unfortunately there are plenty “worst inventions,” all of which create excess waste on the planet. These are things that don’t need to be invented or improved upon, like a banana slicer, which is basically a knife. Or automated checkout machines, which were designed to replace unskilled human labor (which is ethically suspect to begin with), but because they never work, they require full-time attendance by an actual human.

As far as best invention of all time, those are all totally within the context of their time, so that’s an impossible thing to answer. At a certain point, it would definitely be the steam engine. At another point in time, it’s smaller more-efficient, longer-lasting batteries that revolutionize the world.

If you could be a fly on the wall of anyone’s workshop, whose would it be?

I’d love to be a fly on the wall in [synthesizer pioneer] Donald Buchla’s workshop at any time, but especially during the period when he was actively building new synths. But more than that, I’d like to be a human fly that could talk to him, ask him questions, and learn from his genius.

Any advice to budding inventors?

Build what you need and don’t Google it.