Huge 16-bit processor can play Tetris, and not much else 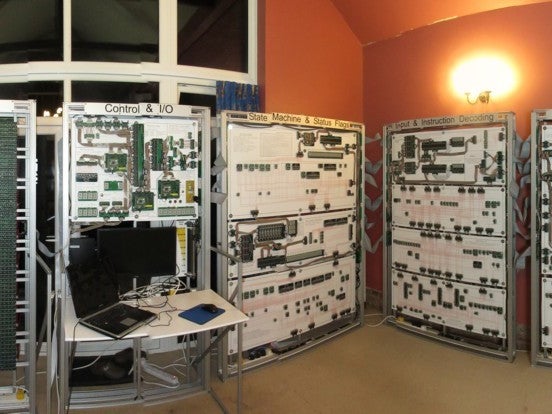 Software engineer James Newman built a 16-bit Tetris-playing microprocessor the size of a room. It's thirty feet long and six feet high, weighs a thousand pounds, and cost $50,000 to build. Newman hopes the processor will find a new home where it can be used for educational purposes. Image courtesy of James Newman
SHARE

You may have heard that your smartphone contains more computing power than all the computers used on the Apollo mission combined. But imagine taking the computing power of a Super Nintendo, and packing it into a computer the size of–a living room? On the surface, that might seem pointless. And yet, that’s precisely what one man in Cambridge, England set out to accomplish. Four years ago, James Newman began work on what he calls a “megaprocessor,” a thousand pound, 16-bit computer that takes up most of his living room.

So why did he do it? According to his website: “Because I want to.”

But in a conversation with Popular Science, Newman says that the project started as a way to visualize how processors work.

A software engineer by day, Newman had a good understanding of how digital electronics function, but he “wondered what it would be like to watch data flow around.” So he began building a processor that used discrete, individual transistors, rather than the tiny ones used in a silicon chip. Then he added LEDs to visually display the data processing in real time.

Over the years, the machine got bigger and bigger. He hadn’t intended for the processor to grow so large. “I just got suckered into it bit by bit,” he says.

Newman finished the megaprocessor a few weeks ago. The massive machine is now over 30 feet long and 6 feet high. It consists of over 40,000 transistors and 10,000 LEDs, and cost over $50,000 to make, he says. So far he’s programmed Tetris and Tic-Tac-Toe onto the computer. Next he hopes to add the classic dumbphone video game, Snake.

What do his friends and family think of this epicly off-beat project? “They’re quite interested,” he says. “Though, of course, they all think I’m mad.”

Newman would like the megaprocessor to go to a good home, somewhere it could be used for educational purposes. “It could help show people what goes on inside the things they use,” he says, “and it could possibly get youngsters interested in how transistors work.”

Newman details the history of the megaprocessor project, including detailed specs, on the project website. Below is video introducing the project:

A modified version of this article was published in the November/December 2016 issue of Popular Science, under the title “His Room-Size Computer Plays Tic-Tac-Toe.”