A new paper suggests it could. Take that with a grain of salt. 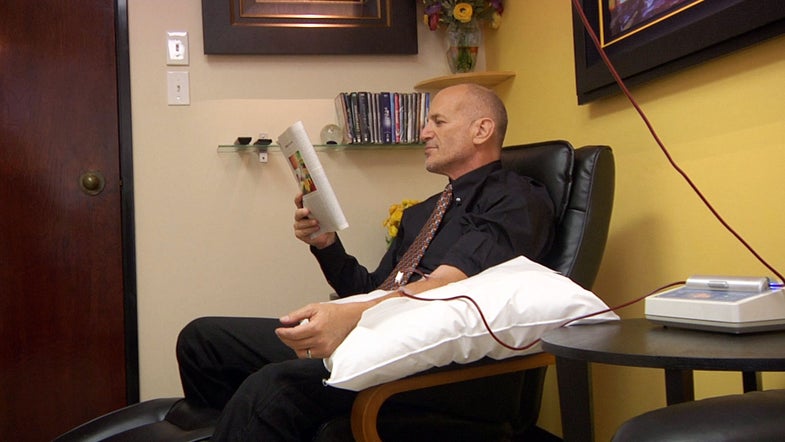 At this time last year, the Ebola outbreak was just beginning to ravage its way through West Africa. Now, as the death toll has risen to unprecedented numbers, scientists have scrambled to find quick, effective treatments. According to a study published in the 2016 issue of the African Journal of Infectious Diseases, medical practitioners say they have been able to inactivate the devastating virus using ozone therapy.

Ozone is an unstable version of an oxygen molecule, made of three bound oxygen atoms while the typical stable molecule has just two. You’ve probably heard of ozone in the atmosphere–we need it to accumulate about six miles above us in the stratosphere to protect us here on the Earth’s surface from harmful radiation. But when it’s introduced into the body, it plays a completely different role. For over a century, ozone has been used to treat disease, however today it is regarded as an alternative medicine therapy. At high concentrations, the gas is toxic. But at low doses, ozone is thought to increase the number of antioxidants in the blood. It was used in World War I to disinfect wounds; today its proponents claim that ozone is an effective treatment for arthritis, AIDS, Parkinson’s, cancer, heart disease, and diabetes.

But scientists aren’t convinced that ozone is the medical miracle that others claim. One 1991 study found that ozone inactivated HIV in a cell culture, but one expert pointed out that the researchers found the same results when they exposed the culture to nitrogen. And while some scientists have found that ozone can be useful as a disinfectant, it comes with significant and sometimes lethal side effects; other studies have found that ozone therapy isn’t clinically useful at all, or may even speed up the progression of some degenerative diseases. The Food and Drug Administration doesn’t consider it an effective treatment, but it still limits the amount of ozone that can be used in clinics in order to prevent the harmful side effects.

In this new study, several doctors who are proponents of ozone therapy tried it out on four healthcare workers in Liberia with Ebola symptoms (three tested positive for the disease, the other had been exposed to the virus but that patient’s tests had still come back negative). For ten days, the researchers gave the patients ozone by infusing it into their blood through their veins, passing it into their rectums, and giving them ozonized water to drink. The researchers write that the patients’ symptoms abated after just a few days, and none died–which surprised the researchers, since the survival rate of healthcare workers infected with Ebola was just 40 percent. “Typically, death occurs within a week or less in the majority of cases. In all our ozone treated cases, symptoms did not progress from the start of ozone therapy, and symptomatic patients were totally free of all symptoms, inclusive of fever, generally by day 3 of treatment,” the researchers write. Though they haven’t tested the mechanism in the lab, the researchers suspect that the ozone damages the surface of the virus so that it can’t infect the cells of its host. And, unlike other emerging Ebola treatments, ozone therapy is inexpensive, costing only $10 per day.

There are reasons to be skeptical of this research. When news of the treatment leaked in 2014, those with a background in science expressed extreme concern over the legitimacy of the treatment. Further, the researchers only tested the therapy on four patients, all of whom were treated at the ideal time: very shortly after symptoms developed. While the patients’ survival rate was higher than the typical rate in the clinic, the sample size was too small to be certain that it wasn’t just due to chance, that ozone therapy did, in fact, make them better.

Such a small study likely does not provide enough evidence to convince doctors to use ozone therapy instead of vaccines to treat Ebola–especially because the therapy has not yet been definitely proven to be useful against other diseases. As the Ebola outbreak subsides, the desperate search for rapid, effective treatments has slowed. That might provide researchers enough time to thoroughly evaluate ozone therapy to see if the study’s findings hold up, and determine if ozone therapy would be a viable treatment option should another outbreak happen in the future.