This Japanese fungus can dry-age a steak in 48 hours. Here’s how. 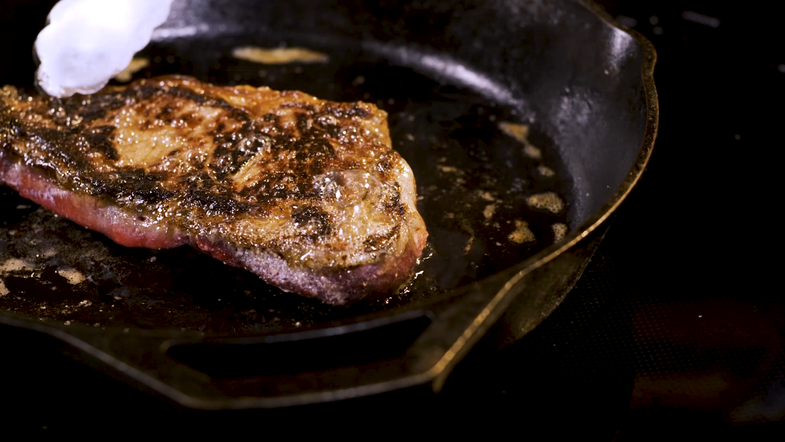 Pan sear until caramelized on both sides. Thomas Payne
SHARE

In the hipster precincts of Brooklyn, New York, it’s getting so you can’t ride your fixie down the street without getting your mustache caught in a banjo string. The same type of cultural giggle might be had about a certain fungus, which has, for the past two years, been taking over the menus of America’s top foodie establishments. It’s called Aspergillus oryzae, otherwise known as koji, and chefs are slathering it on everything from salad dressings to steaks. Koji ferments food. Japanese cooks have used it for centuries to make soy sauce, miso, and natural sweeteners. They also use it to brew sake. It’s considered the national mold. Kind of like a microscopic mascot that imparts umami wherever it goes. The science behind koji is less well-known. Its spores are fond of hot and humid environments (what spore isn’t?), and grows on cooked rice. As they get bigger, they release biochemical agents-protease enzymes that break down protein and amylases that digest starch. When mixed with, say, soybeans, the ensuing culture helps transform the concoction into soy sauce. But when applied to steak, koji does something amazing. Its powerful enzymes slowly tenderize the meat. Innovative chefs have found that in just 48 hours, koji can turn a fresh-cut piece of beef into something that resembles, in texture and taste, a 45-day-aged steak. A koji-aged New York strip, properly cooked, will offer up the same nutty and funky flavor as one that’s been professionally cured, and with a touch of miso sweetness.

You don’t need a Michelin star to use koji. You just buy a bag of it (online is easiest), crush it up, rub it on a steak, let it sit in the fridge for 48 hours, and cook. To serve a slab this summer that tastes like a $75 restaurant cut but costs a fraction of that, follow these six steps: 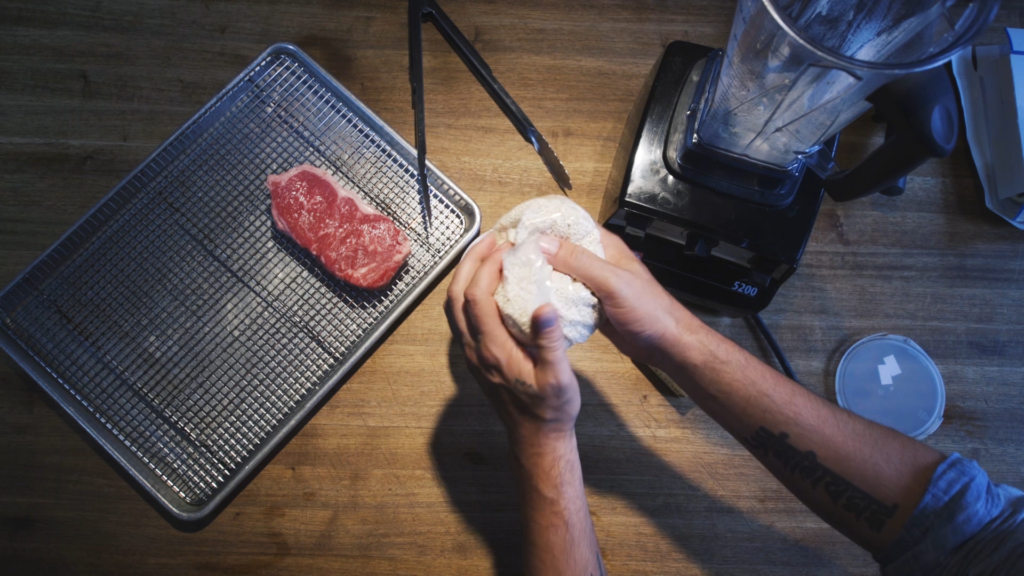 A bag of koji and a New York strip steak, ready to be rapid-aged.

Buy koji rice online or at an Asian or Japanese grocery. The rice, which has been inoculated with koji spores, will look like it has a crust on it. Pulverize the grains in a blender. 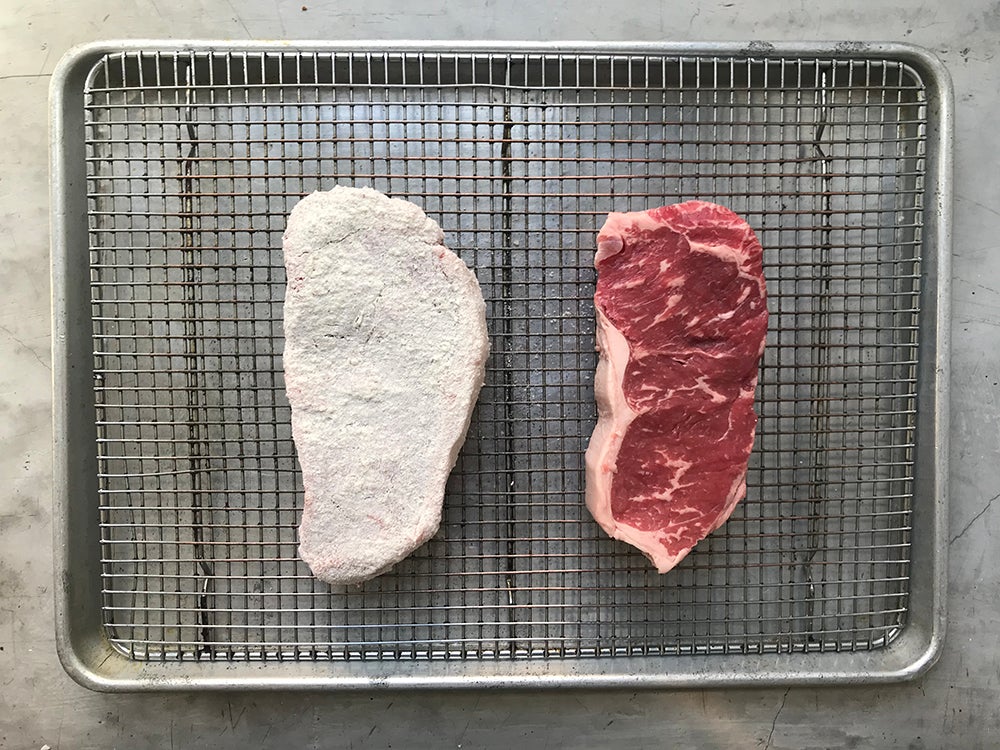 Rub the resulting fine powder on all sides of a steak. Any cut will do. The koji will turn an average cut of meat into a way-above-average dining experience. 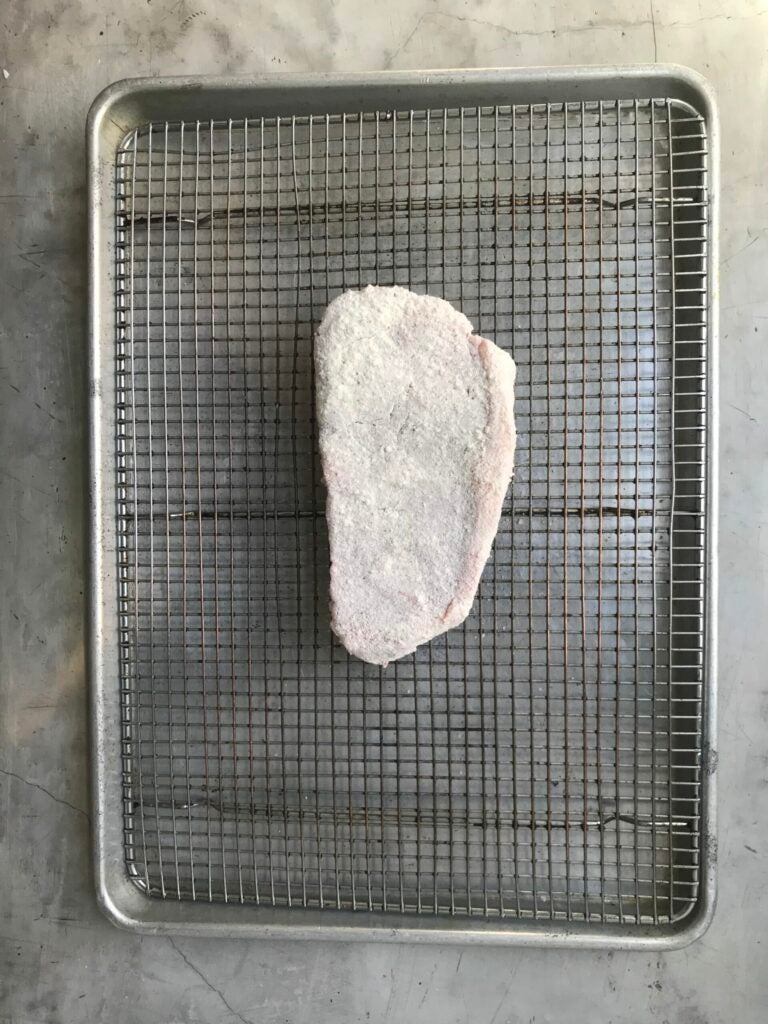 Put the steak on a wire rack (so it and the koji can breathe), place the rack on a sheet pan, and refrigerate. After about 12 hours, the meat will look like a snowy slab as the enzymes break down the flesh and turn brown. Leave for a full for 48 hours. You can go for up to 72 hours, but the longer the meat sits, the more its ages and dries and eventually gets tough. 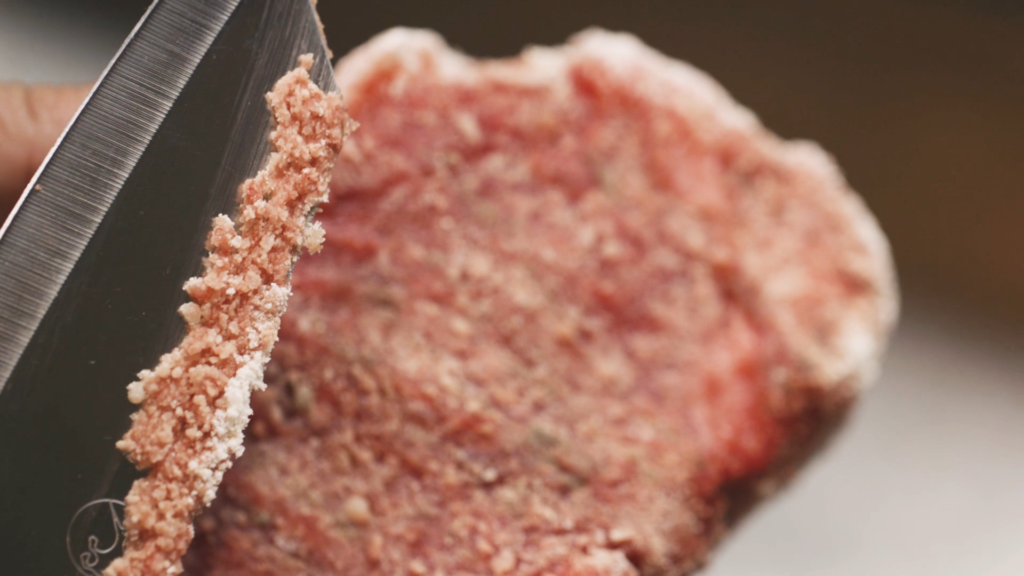 Use the back of a knife to scrape off the koji. What you’re now holding should look dark red and dried, just like an aged steak. Rinse the meat in cold water to get rid of any remaining koji paste. 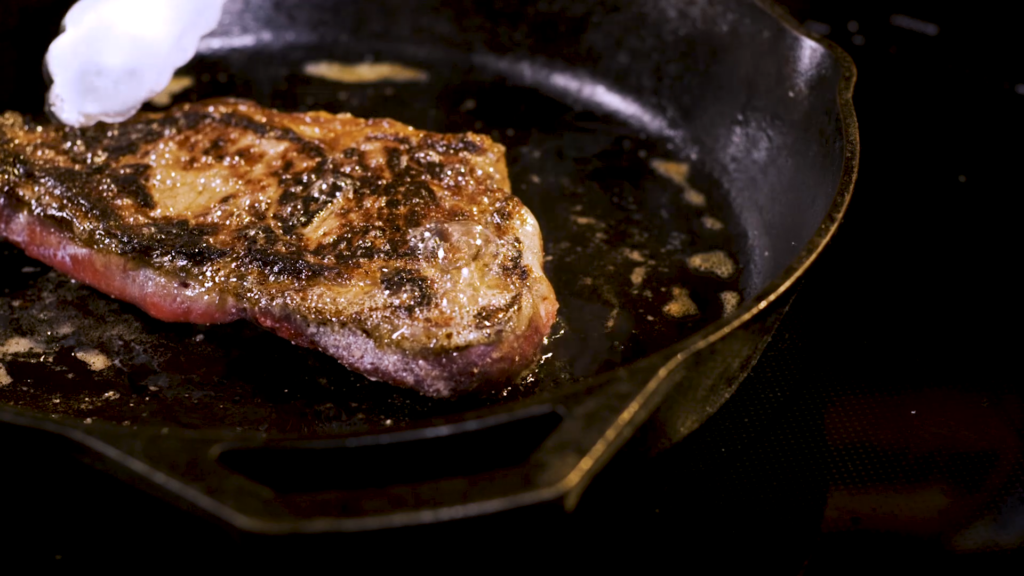 Pan sear until caramelized on both sides.

Season the steak with salt and pepper. Don’t bother with any other seasonings because you’ll ruin the final effect. Pan-sear the meat in clarified butter in a cast-iron skillet until it has a nice dark crust, usually for a total of three minutes per side. Be careful: A koji steak caramelizes much faster than a standard one, or even an aged piece of meat. Pop it in a preheated, 400-degree oven for about 4 to 5 minutes. That should produce a medium-rare result. Take it out, let sit for another 10 minutes, then slice and serve.