How to make the world’s best paper airplane 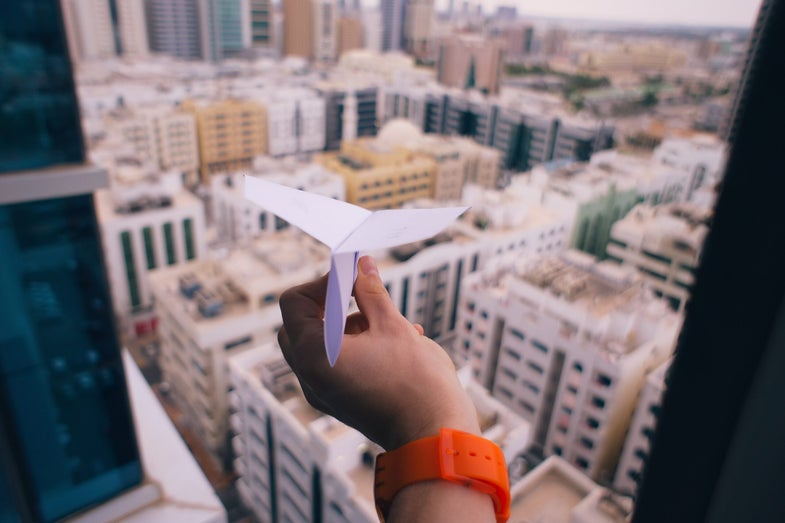 So you want to make the world’s farthest-traveling paper airplane. There are four things to consider:

Paper is measured in the weight of a ream—500 pages. The average copier paper in the U.S. is 20-24 pound stock. Guinness World Record rules allow us to use paper that weighs up to 100 GSM (grams per square meter), or about 26.4 pounds. When you’re looking for distance, you want your paper as heavy as possible.

Paper that heavy usually comes in A4—an international paper size not commonly used in the U.S.

John Collins, the paper plane designer who currently holds the world-record, says you want paper that’s been photocopied on.

No. 2: Forces and Center of Gravity

For any paper airplane, you’ll have to deal with two major forces during your flight—lift (upward force) and drag (backward force).Your plane needs to generate more lift than drag to go up—when more drag is generated than lift, the plane falls.

You have to engineer in a way for the plane to gain speed to counteract drag. You put a small bend at the back of the plane, upward, so that when the plane has gained sufficient speed, there’s enough air bouncing off of that upward bend to deflect the tail back down and that pulls the nose back up. Now it’s level again.

When designing your plane, you’ll want to make sure the wings are bent upward. This is called a positive dihedral angle, and helps the plane to correct itself if it starts to sway. When one side dips too low, it produces extra lift and the plane will return to its center of gravity.

It’s not easy to find a space big enough. Collins’ world-record breaking airplane was thrown by quarterback Joe Ayoob at the McClellan Air Force Base in Sacramento, CA. Collins says you need the perfect weather conditions.

All of our best throwing days were 52 to 62 degrees, 25-30% humidity. If the air thickness is wrong, or if the wings aren’t stiff enough to take care of the air quality, the plane tends to die in that last third. You want perfectly stable.

The great thing about Joe is that he had a way, a knowledge, of changing his throw to match the sport that really was invaluable in, like, looking how to throw the paper airplane the best way. We worked together for about 18 months and he was working on his throwing technique the whole time.

To summarize: Find 100 GSM A4 paper, design your plane with the proper center of gravity and center of lift, and throw it the right way in the right place under the right conditions. Congrats, you’re now a world record holder.