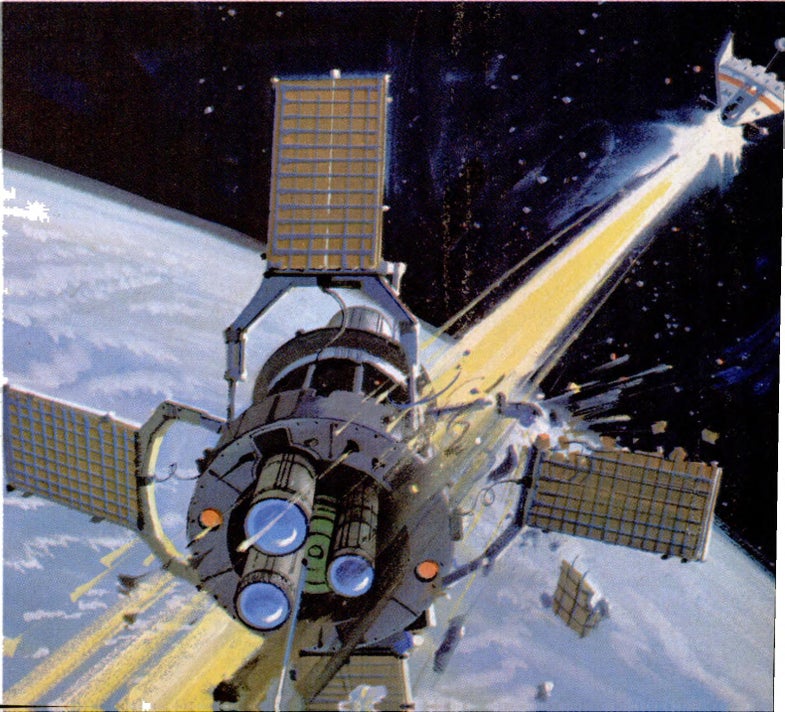 Some time in 1970 a manned space scout is going to creep up to an orbiting satellite. The spacecraft will be of a shape not yet seen in space, resembling a motorboat with displaced rudders, or a flatiron with fins. It will inspect the satellite carefully, at close range. Then its radio operator will transmit to the earth a coded message whose substance may be like this:

“Satellite 1970 PL-2 is evidently a surveillance satellite. Nuclear radiation from it indicates a power reactor, not a warhead.”

The decoded message may be phrased in English, Russian, or still another language. It would indicate that the alien satellite was no orbital nuclear bomb—and that there was not yet a “hot” space war.

Interception and examination of suspicion satellites by manned spacecraft may be foreseen in the near future. It will be one of the logical developments of the cold war in space—a strange, secrecy shrouded contest, short of open hostilities but with deadly serious military implications—that is going on right now.

Hush-hush trials at remote Johnson Island in the mid-Pacific are refining U.S. space-war weapons, already operational, for the mission of destroying hostile satellites. They are the American answer to a threat of attack upon us from space, brought into the open last year by a Russian claim to have developed an orbital nuclear bomb. Both East and West have put surveillance satellites (a polite name for spy satellites) in orbit. And both have been conducting studies, at least on paper, bearing on possible tactics and armament for space combat.

The first one we know about, orbited in 1960, was the U.S. Midas II. This and two more Midas satellites in 1961 were openly called prototypes of craft to give early warning of an enemy ICBM attack, by detecting the heat of large missiles’ rocket blast at takeoff. Then U.S. military-satellite programs went under wraps—and further launchings, if announced at all, have generally been unidentified by type. The Midas satellites—which now have a competitor in long-range radar early-warning systems— reportedly are still in the research-and-development stage.

Photo satellites with telescopic cameras of fantastic power now gather military intelligence. Samos II, launched in 1961, was the only known U.S. example before the secrecy blackout—but was a prototype of a series that has since been reported operational. Current Samos craft are believed to be recovered with their films, although this kind of space news does not get into the papers. Their pictures may be proving highly effective for reconnaissance.

For example, a step-up in the power of Russian rocket boosters about two years ago was indicated by the increased size and strength of Soviet rocket-test stands. How this news reached us has not been revealed, but speculation credits it to Samos photos.

Since two can play at that game, and do, quite possibly you may be in a photograph snapped today by an unseen Red satellite. Former Premier Khrushchev, in a moment of unusual candor, told an American official two years ago that the Russians were using photo “spy” satellites, too—and jestingly offered to swap photos with us.

Satellite trackers here have no doubt that the Red sky spies are among the varied unmanned craft that the Russians call Cosmos satellites. Beginning with Cosmos 4 in 1962, many of these have been brought down and recovered on land after a few days in orbit, apparently by the same parachute-recovery technique that Russian manned spacecraft use. Cosmos 45, 65, and 92 were weather-photo satellites that brought down their films for development, the Russians themselves say. More than 40 other recovered Cosmos satellites could as well have brought back spy films. Probably many did.

If the Reds’ eyeing of us eases world tension, by convincing them we are not secretly preparing to attack them, perhaps we have more to gain than lose by it. Actually the East-West photo satellites are putting into practice, in modified form, the “open skies” plan for aerial inspection that President Eisenhower proposed and the Russians rejected some years ago.

Surveillance spacecraft of another sort—this country’s Vela satellites—are designed to detect any clandestine atomic explosions in space, in violation of the existing nuclear test-ban treaty. Since the treaty went into effect, in 1963, we have orbited six of them. No Russian spacecraft with the far-ranging orbits suited to this purpose have yet appeared in the heavens.

Orbiting H-bombs? What would concern us more than Red spy satellites was illustrated last November when Tass, the official Soviet news agency, made a startling announcement. Russia, it claimed, now had “orbital missiles” whose warheads could deliver a surprise blow “on the first or any other orbit around the earth.” Of course this may have been said to comfort the Russian people, or discomfort the Chinese leaders. Or it could be true.

The possibility of orbiting nuclear warheads—which could be “called down” upon ground targets by radio command at any time—has long been recognized. Since both the U.S. and Russia had agreed not to, in a United Nations resolution, the Tass report raised eyebrows in Washington satel- lite-high. Queried about it by our State Department, Russia denied it had orbited any armed satellites or planned to—but the UN agreement, it maintained, was no ban on developing them. To Western observers it looked prudent, if such missiles really existed anywhere, not to rely solely on their possessor’s assurance of good intentions.

Now, it is true that many weapons experts question the military value of orbiting H-bombs, and the U.S. has studied and rejected them. Compared to ICBMs launched from silos, they have been called less accurate, more limited in size and power, and far more difficult to control reliably. Nevertheless we would hardly care to have them whizzing over our heads—and the U.S. now has counterweapons developed primarily to meet just that threat:

Antisatellite weapons. Ready for action are two U.S. weapon systems for destroying armed satellites. One, based on the Nike-Zeus anti-ICBM missile, successfully intercepted a satellite as early as 1963. The other, using the Thor-Agena rocket combination, duplicated the feat early in 1964. Since then, these weapons have repeatedly scored satellite intercepts at altitudes up to hundreds of miles, Secretary of Defense Robert S. McNamara has disclosed. Practically all further details, including the kind of warheads used for the “kill,” remain classified. Some of our secret military satellites launched during recent years could have been targets for the trials. 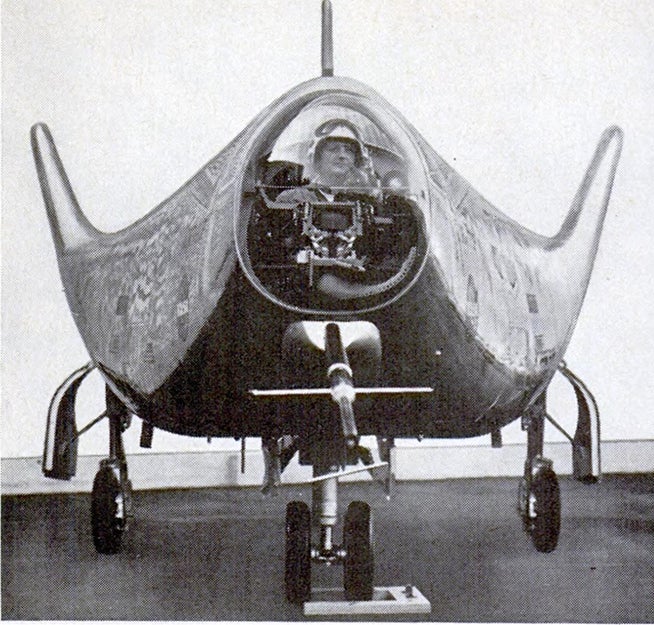 “The manned space scout will be of a shape not yet seen in space”—but already foreshadowed by trial craft like this one.

An order to fire the antisatellite weapons would be transmitted from Continental Air Defense Command, the U.S. portion of NORAD, whose combat operations center is carved in the granite heart of Cheyenne Mountain, Colo. [PS, Nov. ’65]. Within this underground fortress, into which pour more than 10,000 satellite observations daily, our Space Defense watch over the 1,000-or-more man-made objects in orbit. Any new one is immediately detected, tracked, and—if not one of ours—closely observed to determine its purpose, innocent or otherwise.

An orbiting H-bomb could be recognized long before it grimly revealed itself by de- orbiting toward a U.S. target, Deputy Secretary of Defense Cyrus Vance told a Senate committee behind closed doors last year. The “how” was deleted from a heavily censored version of his statement made public. But the Space Defense Center’s clues to the nature of a satellite presumably include the kind of orbit, radio transmissions, the number of satellites of the type (an orbital-bomb attack would call for a suspiciously large number), and shape—indicated by radar, and by some of the world’s most advanced satellite-watching cameras and telescopes.

Discovery of H-bombs orbiting overhead could evoke a “missile crisis” like the Cuban one of 1962. Perhaps the Washington-Moscow hot line, installed since, would have an opportunity to prove its worth. There might be a U.S. demand that the missiles be harmlessly de-orbited, or destroyed in orbit—depending on what their built-in controls, or “destruct” charges if any, made possible. Were the other side unwilling or unable to clear the skies of their menace, U.S. antisatellite arms could.

Probably the Russians have antisatellite weapons, too. Some Cosmos satellites that mysteriously exploded in orbit may have served as targets for trials. 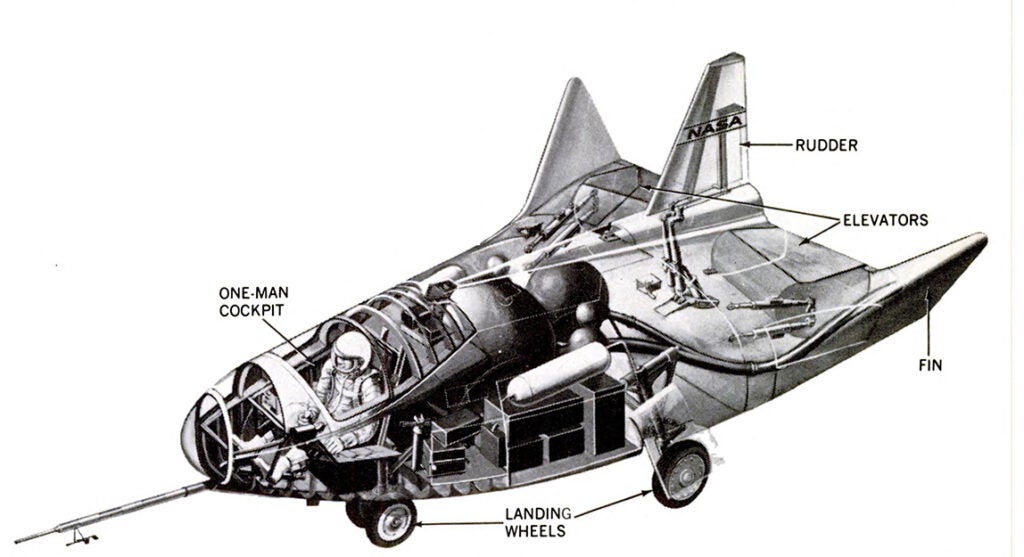 New generation of manned spacecraft, rocket- boosted into orbit, will inspect satellites or perform other missions—and then, reentering atmosphere, glide to land bases like planes. Though wingless, they get lift from curved shape of body. One 22-foot prototype, NASA’s HL-10 “lifting-body research vehicle,” resembles a flatiron with fins. Water ballast in globular tanks, behind pilot, varies its weight from 2Vi to 4y2 tons for tests. First trials will drop it from high-flying B-52 plane for unpowered glides to earth. Later, rocket engine may extend range.

Manned interceptors. Our Gemini flights have demonstrated how manned spacecraft could rendezvous with orbiting satellites and inspect them.

What manned space scouts may look like is suggested by current experiments with prototypes of “lifting-body” spacecraft that, although wingless, will glide back to earth like planes. A pattern for another type may be the Air Force’s coming Manned Orbital Laboratory—a maneuverable space station that could inspect a satellite itself, or dispatch an auxiliary Gemini to do it.

A scout craft could “weigh” a satellite, to see if it was heavy enough to hold an H- bomb, simply by nudging it with a timed impulse of the scout’s thrusters—and noting the velocity imparted to the satellite. An actual test of this stratagem was included in scheduled Gemini experiments.

What if a scout craft’s command pilot received orders to “kill” an offending satellite? Possibly it might be disabled simply with a few well-placed pistol shots, and left in orbit. It might be rendered deaf to ground commands by severing a radio antenna. Or a retrorocket attached to it could cause it to de-orbit, and burn up.

In case of an encounter of two hostile scout vehicles, possible weapons for combat already exist—heavy-caliber machine guns and homing missiles. Large “space battle- ships” have no place in serious thinking-spacecraft are quite vulnerable and the biggest are the easiest to hit. But it would take direct hits by something solid.

In airless space, an explosive weapon produces no blast, beyond the limited range of its own vaporized material. The U.S. Naval Ordnance Laboratory calculates that it would require more than 500 pounds of high explosive—a heavy load to carry into space—to breach the walls of a spacecraft only 26 feet away. Even a nuclear explosion would have little blast effect, but its heat would be telling. A nuclear warhead could neutralize an enemy H-bomb by literally cooking it, NORAD itself points out.

No hiding place. As a military theater, space presents novel and difficult problems. On the ground, armies can be hidden by camouflage or natural features. Even on the high seas, fleets can hide by following bad-weather areas. But in space, nothing goes undetected.

Recent moves show that neither side wants the cold war to spread afar. President Johnson proposes a treaty barring military activities and claims to sovereignty on the moon and other celestial bodies, and guaranteeing freedom to explore them to all nations. The Russians reply with so nearly identical a proposal that prospects for agreement on a “moon treaty” look good—a hopeful sign that adventurers to other worlds may leave the earth’s conflicts behind.