Could This Liquid Replace Food?

Soylent, a milky beverage filled with nutrients, lets drinkers go without real food. Meet the inventor behind the stuff. 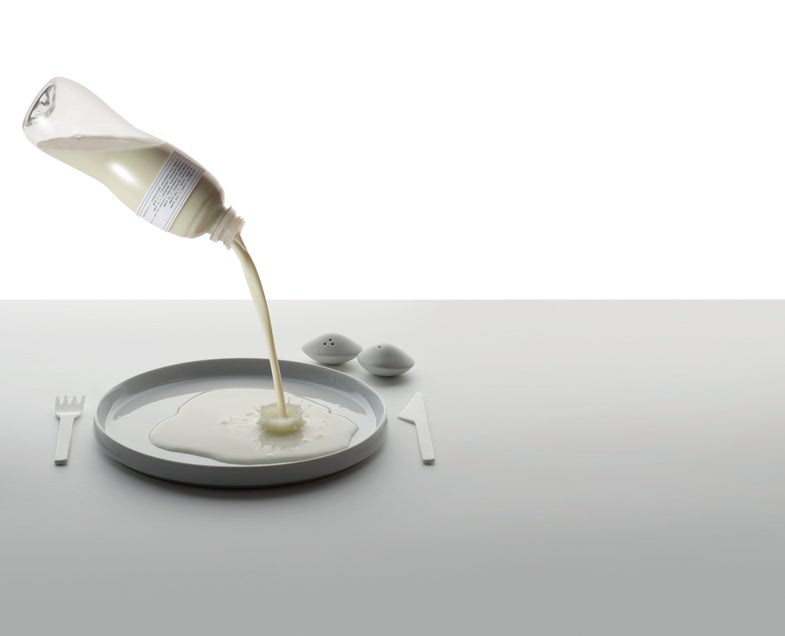 Since mid-January, Rob Rhinehart has eaten very little of what most people would consider real food. At times, he’s gone nearly a month between meals. Instead, the 25-year-old electrical engineer from San Francisco has survived almost entirely on Soylent, a nutrient-packed drink he manufactures in his kitchen. To Rhinehart and a growing legion of followers, the cloudy, white liquid is a substantial step toward changing how humans eat—or don’t.

Our physiological dependence on food has blossomed into an almost sacred attachment, subdivided into countless cultural, commercial, and aesthetic variations. But food is only fuel. And that fuel costs time and money. Last summer, Rhinehart found himself broke in San Francisco. He’d moved there after graduating from Georgia Tech to start a wireless-communications company. It failed, and he was left subsisting on the cheapest diet possible: ramen noodles and Costco corn dogs. He says he and his roommates began taking supplements to ward off scurvy. “I was unhealthy, hated cooking, shopping, and cleaning, and my only major expenditure was food,” Rhinehart says. Rather than suffer the thrice-daily burden of cooking, eating, and cleaning up, he decided instead to streamline his food intake.

For three months, Rhinehart pored over pirated textbooks, learning what he could about biochemistry and nutrition. He assembled a list of ingredients—mostly chemicals—that would provide everything he needed to survive: whey isolate for protein; maltodextrin for carbs; even micronutrients like zinc and chromium. He began ordering them from food-additive and chemical suppliers on Amazon and eBay. Soon he had a kitchen full of powders ready for mixing.

There are plenty of products that can take the place of a normal meal, but those drinks are not meant as complete food replacements; in the long run, they are expensive and unhealthy. Done properly, though, liquid diets are feasible. In 1965, the National Institutes of Health used California inmates in a 19-week experiment to test whether astronauts could live on a liquid diet. The prisoners wound up happier and healthier (rumor is, the astronauts objected to the lack of flavor).

“I watched my
life flash before my eyes and chugged.”On January 12, Rhinehart measured each of his ingredients on a scale, dumped them into a pitcher, and added water. “I watched my life flash before my eyes,” he says, “and chugged.” He quickly realized he’d forgotten to include fiber, which helps regulate absorption; while he felt great after immediately metabolizing 800 calories, he soon crashed, feeling exhausted and out of it. After a few adjustments and a brief bout of potassium poisoning (which left Rhinehart with heart palpitations), he created a working formula. He went a month, then two, then three, ingesting almost nothing but Soylent, a name he came up with as a nod to the 1970s science-fiction film Soylent Green. He consumed three or four liquid meals a day, each of which took about a minute to prepare, drink, and clean up. To make sure he was healthy, he got occasional blood tests, and he tracked his progress on his blog, Mostly Harmless. There, he noted changes to the formula, such as replacing one third of the maltodextrin with oat powder in order to get more fiber and a lower glycemic index. He also began recording changes to his life.

Not buying food and not cooking saves him a lot of time and money. The raw materials in the 2,692 calories per day he drinks cost him only $154.82 per month, as opposed to the $500 he says he used to spend on solid food. Rhinehart also credits Soylent with a marked increase in energy, clearer skin, and less dandruff. While documenting his progress, he has gained a following.

The response to Soylent has been mixed, mostly because it causes people to so deeply question the nature of food and their relationship to it. That has prompted some to lash out at Rhinehart. “Have fun dying of cancer,” one person wrote. Nutritionists, too, are skeptical. According to Joy Dubost, a dietitian and spokesperson for the Academy of Nutrition and Dietetics, “Everything we eat is a chemical, so in that sense, I don’t have a problem with it. What I do have a problem with is his one-size-fits-all approach to nutrition. There’s no scientific evidence that indicates it’s going to do what he says it will do.” Also, Dubost says, “I’ve tried it, and it tastes terrible.”

Yet, for every anti-Soylent response, Rhinehart has received one in favor of it. These “reverse foodies,” as a few of his fans call themselves, are driven by the same frustration over food and its constraints. They include people like Daniel Dow, a 27-year-old chemistry and math teacher in central Indiana who has spent the past few months happily eating almost nothing but a Soylent imitation he began making once Rhinehart posted his formulas online.

Reverse foodies like Dow won’t have to subsist on their own for too long. In May, Rhinehart and three friends started an online crowdfunding campaign to raise $100,000, with the goal of mass-producing Soylent. They thought they’d need a month. Instead, they raised the money in two hours. At press time, the total was nearly $600,000, and donations were still coming in.

In an ideal world, Rhinehart says, he would like to make enough off Soylent sales to subsidize it for poor and famine-ridden regions overseas. He would also like to supply some big customers. While he won’t specify which branch, Rhinehart says the U.S. military is interested in providing Soylent to soldiers. What he wants most of all, though, is to change the perception of what does and does not constitute food—a line he blurs every time he sits down to eat.

(*Rhinehart does not publish his complete formula, and he updates it frequently. For news, visit robrhinehart.com.)

Caleb Hannan is based in Denver. He has not tried Soylent. Yet.