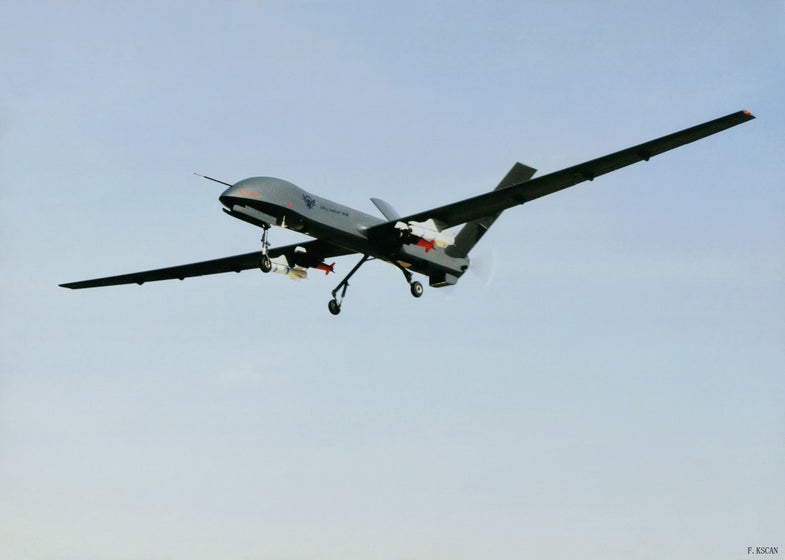 This CH-4 drone is carrying two satellite guided bombs on its inner pylons, and two Blue Arrow 7/9 anti-tank missiles on the outer pylons. The CH-4's electro-optical sensor turret is retracted in flight, under the fuselage, to reduce drag. =GT at China Defense Forum
SHARE

Iraq’s Ministry of Defense released an October 2015 video showing an ALIT CH-4 drone taxiing on an Iraqi runway, with two AR-1/HJ-10 antitank missiles (similar to the U.S Hellfire in terms of performance), in preparations for launch airstrikes against ISIL terrorists. Iraq has apparently taken delivery of several CH-4 armed drones in early 2015, spurred on battlefield reversals in Mosul and Ramadi to ISIL. In addition to a high-ranking Iraqi general overseeing drone operations, there appear to be Chinese support crew visible in the video’s background. 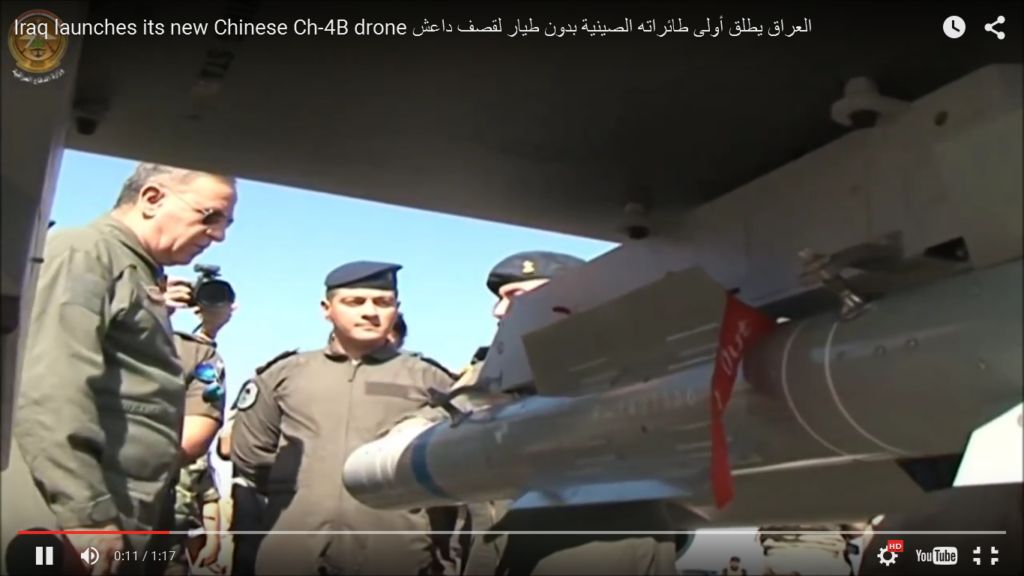 An Iraqi general inspects a HJ-10 anti-tank missile mounted on a CH-4 drone. The HJ-10, like the Hellfire missile, is a laser/optical/radar guided 100lb missile.

The CH-4 is built by the Chinese Aerospace Science and Technology Corporation (CASC). With a 350kg payload, it is roughly similar in size to the General Atomics MQ-1 Predator. It has a retractable electro-optical sensor turret, and a datalink back to the ground control station. The CH-4 also boasts a modern, two person control station to fly the drone remotely, with provisions for both line of sight and satellite communications. 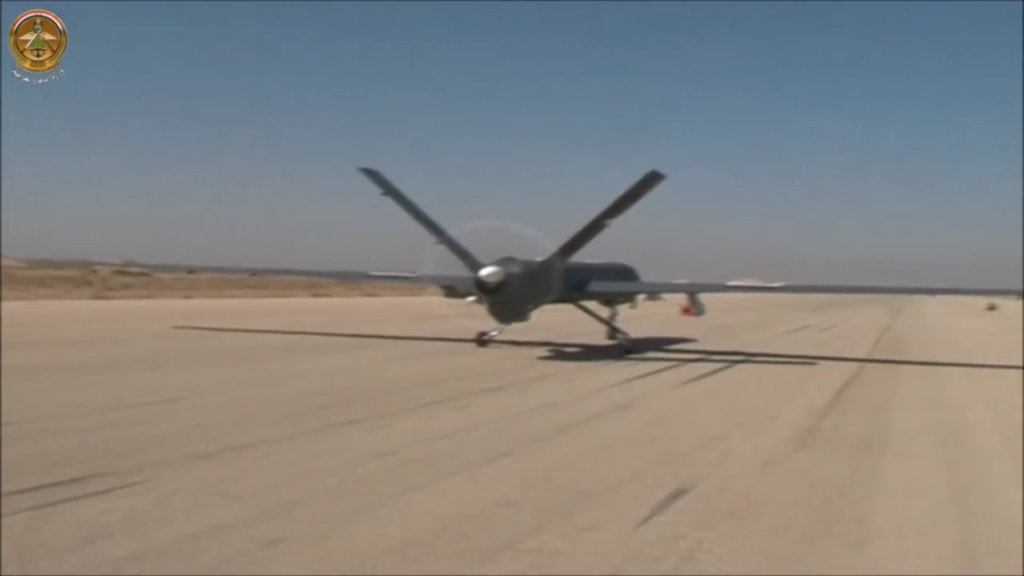 Iraq’s CH-4 drones, with roughly the same armament capability as the Predator drones, will soon be a constant presence in Iraqi airstrikes.

Baghdad’s open display of the Chinese-made armed drone technology is notable in a number of ways. While the video is clearly for news propaganda value, as the drones become operational they will offer Iraqi forces a useful new capability that they have lacked on their own. Just like the unmanned aircraft systems in US skies, the CH-4 is likely to be used for urban surveillance and strike, as well as long-range, continuous combat overwatch in the vast expanses of western Iraq. 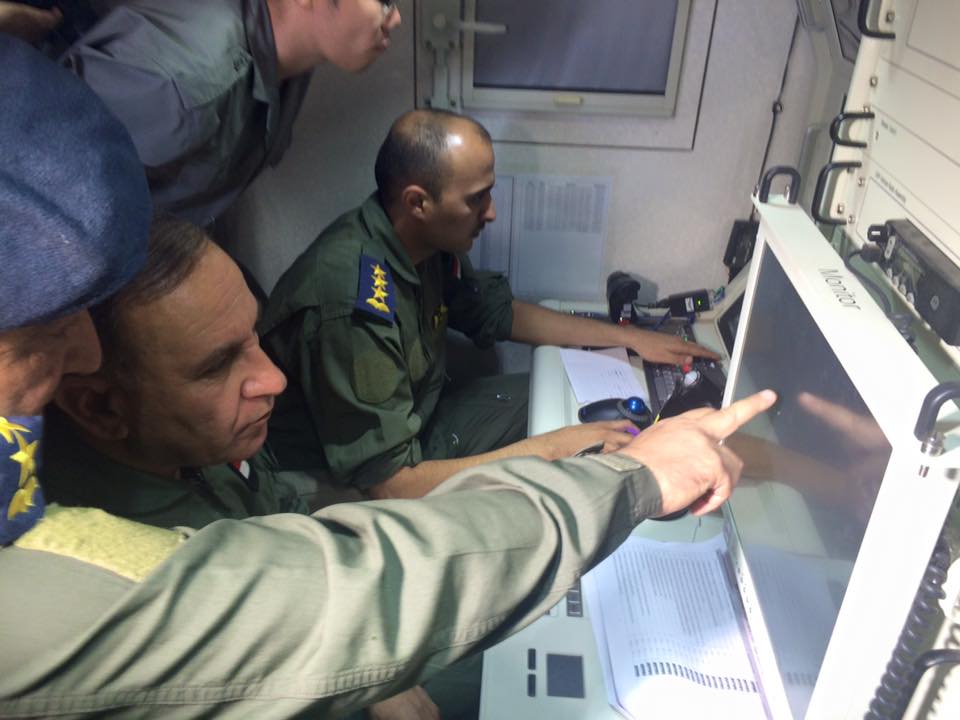 Iraqi generals cluster around the control console for the CH-4, a drone that is becoming a big part of Iraq’s counterterrorist arsenal. The Asian civilian at the top of the picture is likely to be a Chinese contractor.

More broadly, the provision shows both the continued proliferation of Chinese systems (including to Algeria, Nigeria, Pakistan, Saudi Arabia and the UAE), as well as Iraq’s steady use of alternative suppliers of arms, with ramifications for long term alliances. The sale of advanced systems like the Predator UAS has been limited to close US allies, with the provision of armed versions only recently being allowed under limitations that exclude Iraq. Iraq has instead struck deals with Russia for over $4 billion worth of arms like attack helicopters and planes, and now Chinese drones. The growing use of Chinese drones in war zones also undercuts US makers’ claims that theirs are the only “battle-tested” drones on the market.

Did a Chinese-made Drone Just Crash in Nigeria?