China Adds An Island Tower To Its Aircraft Carrier

New photos of the growing CV-17 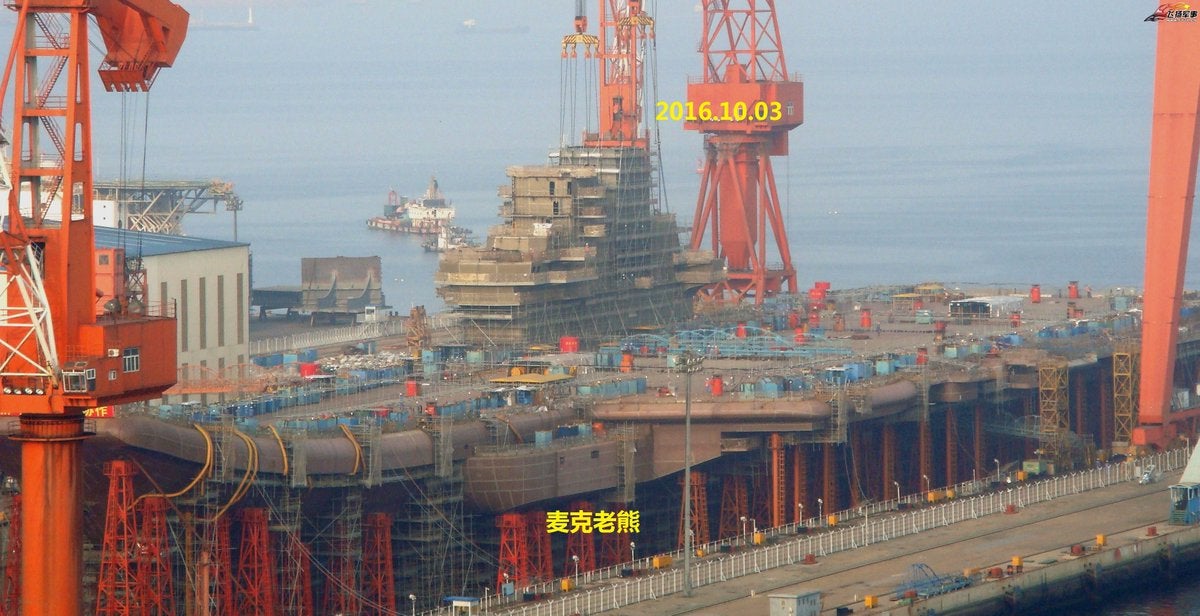 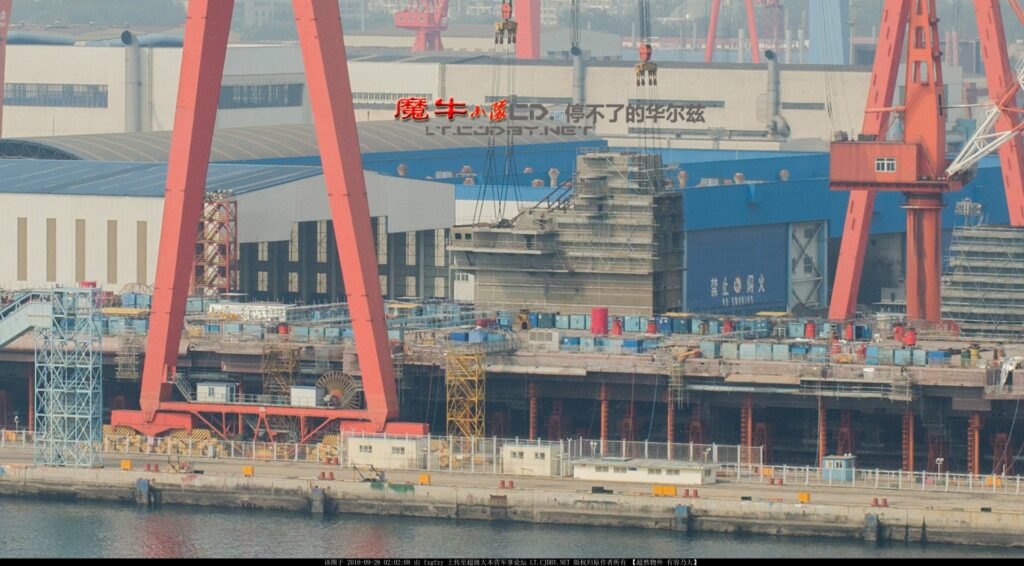 The island structure of aircraft carrier CV-17 is so large that they had to install it as two modules, with the forward module going first. It will then be fitted with radars and communications gear.

Since 2014, the “CV-17” has been under construction at Dalian Shipbuilding Industry Corporation’s drydocks. While the Type 001A largely follows the Soviet design of the Liaoning (ex Varyag) carrier, including a ski-jump ramp for aircraft short takeoffs, some of its more notable changes include a larger displacement, new sensors and optimized aircraft storage. 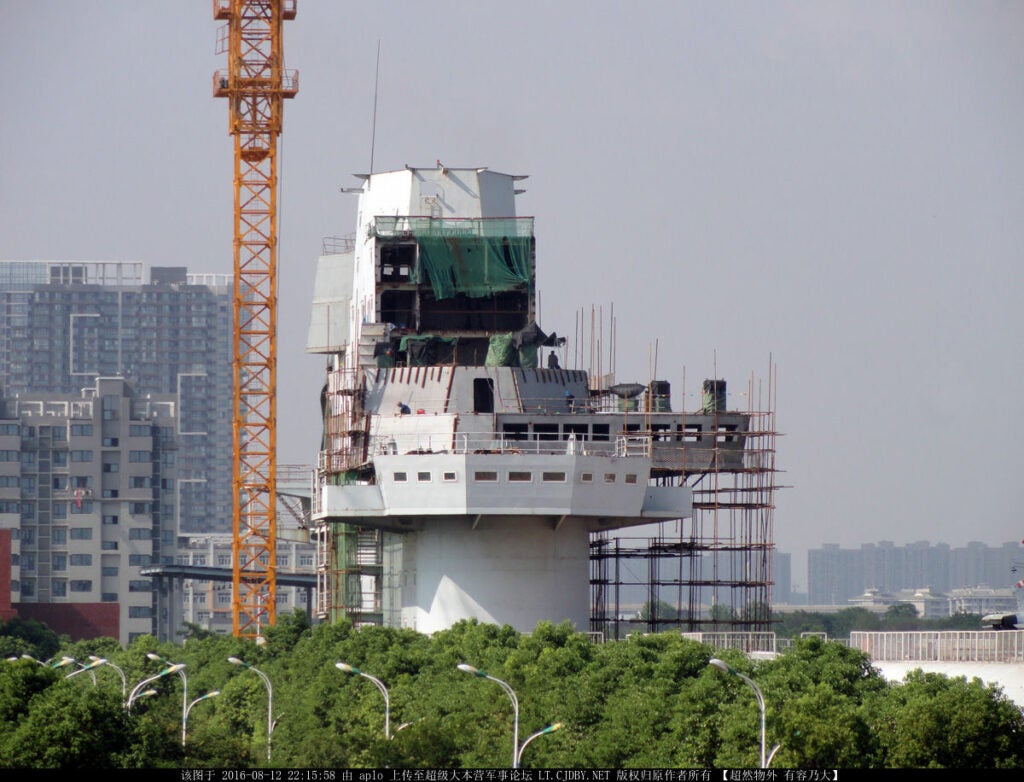 Even the Land Carrier

The aircraft carrier testing rig (used for personnel training and electronic system testing) has been renovated this summer with a newer island, which could reflect the finished layout of CV-17’s island.

Located on the carrier’s starboard (right) side, the island houses the bridge and flight control center, as well as radars. The island, heavily based on the one found on the Soviet-built Liaoning carrier, is so big that Dalian shipyards had to install the structure in two pieces. The new island will be far more capable in what it offers the ship. While the Liaoning has older Type 346 active electronically scanned array (AESA) radars (also found on the Type 052C destroyer), CV-17 will have newer Type 346A radars to control its J-15 fighters and detect enemy aircraft and missiles. The best indicator of what the completed CV-17 will look like actually comes from the island on the “land” carrier test building in Wuhan, which has also been upgraded with Type 346A radars this year. 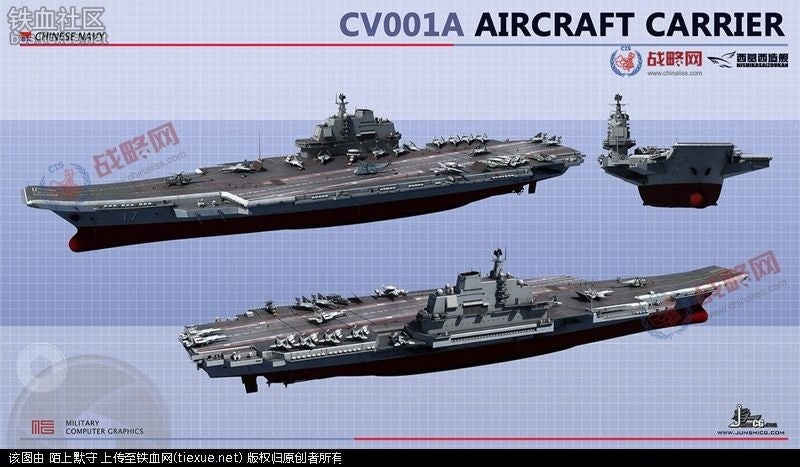 The Type 001A, with a likely hull number 17, will be China’s second, and first homebuilt aircraft carrier. Once it enters service in 2020, it will make the PLAN the world’s second (but still distant) most powerful aircraft carrier force.

With all major structures on the CV-17 complete, the remaining tasks before launch include wiring the ship, installing sensors, electronics and self defense weapons, and various key systems like aircraft elevators, ship propellers and rudders. Presently, the CV-17is targeted to hit the water in mid 2017 for fitting out, and then into service with the PLAN, thus expanding China’s naval aviation capability and power projection. However, the CV-17 can expect to reach operational status faster that its predecessor benefits from the Liaoning’s years of training Chinese carrier pilots. And with more capable carriers in the pipeline, like the catapult-equipped Type 002 and nuclear-powered Type 003, China’s blue-water navy will only become more formidable.

Is this a Model of China’s Next Aircraft Carrier