Will Your Next Pet Be A Robotic Cat? 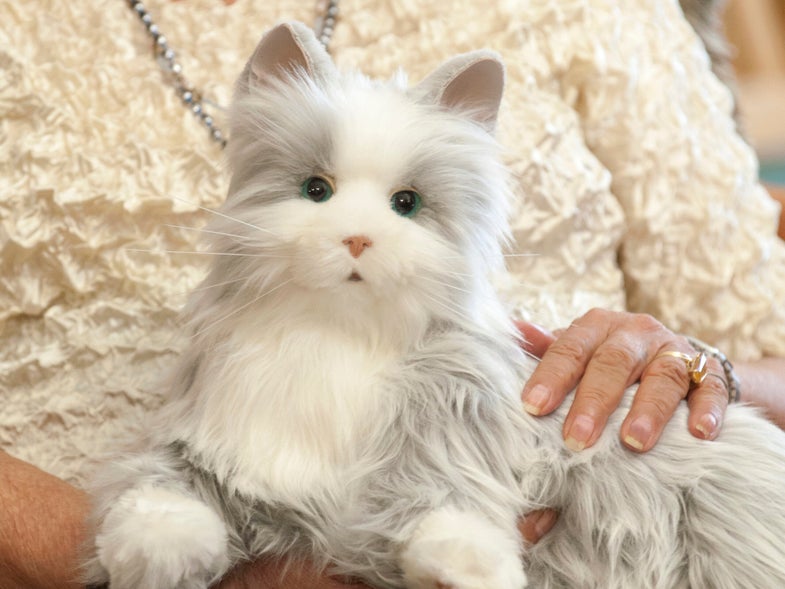 Everyone knows the comfort of the kind of unconditional companionship a pet can deliver. Whether it’s a well-trained dog bringing the newspaper in, a cat purring on your lap, or just the amusement of a goldfish darting aimlessly around a tank, there’s something fulfilling about the relationship between man and pet.

Technology has done a pretty good job of relieving Spot of his morning newsprint duties, and you can watch live video of swimming fish from around the internet without ever buying and filling a tank. So it’s fair to question whether that purring little ball of fluff on your lap really, truly, needs to be a living creature.

If you make a list of everything you love about cats, you’ll probably find that you’ve left off feeding them, worrying about their health, or receiving a dead bird in your lap first thing in the morning.

Last year, Hasbro decided they could do better. So they designed a $99 animatronic cat companion, meant to give you the sensation of love and every other benefit a pet cat can bring, without all the hassle.

They had me at that last part. Five years ago I left a roommate whose presence I don’t entirely miss, but whose cat I sometimes remember fondly. Since then, I’ve considered adopting and fostering kittens for some time, but I travel and I’m self-employed, making me a less than ideal pet parent.

So I figured I’d give Hasbro a chance to sell me on its Joy For All Companion Pet. If you consider my countless Star Wars action figures (from my childhood), Hasbro has amassed a significant amount of wealth from me and my parents over the years. So when I read that they’d created a faux pet, I was interested to see if this was a flop, or a true “take my money” toy.

I requested three of the toys from Hasbro (I live with a roommate, and one of the unofficial definitions of a crazy cat owner is humans being outnumbered by cats in the home, so we settled on three). Could they give me the same kind of companionship as if I’d adopted three cats from a shelter?

It didn’t start similarly. First, there was no shelter, the cats came through the mail in a big brown box full of toy packaging. I opened one up to start: an orange and white longhaired cat.

Locating the little felt-covered “on” switch was easy, and the thing was quickly off and running–or rather, squirming. Hasbro didn’t make a BB-8 here. These cats are designed to stay put on your lap, and though they may squirm and roll a bit, they’re not going anywhere.

It’s awkward having a robot squirming on your lap, so I did what I was supposed to and just pretended it was real, and gave its head a few rubs, then the whole length of the back. I could feel the mechanical, hard structure immediately beneath most sections of the fur, and the ears, while lifelike, are hard and sharp.

Still, it was lifelike enough and responsive enough that I kept going. And it was convincing enough that, when the cat rolled a bit and exposed its belly, I was hesitant to touch it there for fear of lacerations. After all, if this Termi-Cat-or is supposed to be realistic, but it’s mechanical, what kind of mangling could it do to a wandering hand?

Jokes aside, Hasbro has done a great job with the weight of the cat, and its fur is lifelike, but because it’s actually lifeless I couldn’t quite get beyond how matted down the hair looked. Rather than floofy or puffy, the cat’s coat looks the same way it might if it were sick (or dead) and hadn’t been cleaning itself–treading that line of the uncanny valley in a disconcerting way.

When I took the cat off my lap and put it on the couch, it meowed, loudly and irregularly, and went through the motions of stretching and pretending to lick a paw and clean itself. Cute, in a Furby-evoking way.

I pat the head a few times, and as it registered this touch, it suddenly began purring instead of meowing–something I have to admit is soothing. I can feel the cat vibrating from the sound ever so slightly, and this particular sensation is a lot like what a real cat does when it purrs. Again, props to Hasbro.

The next morning I got bold and cracked open the other two packages. Having all three ‘Joy For All Companion’ cats going at once is a bit of a hassle. I only have two hands, and one lap, so the meowing can get a bit annoying–and not in an endearing way. If you think about the difference in reactions to a baby’s cry on an airplane between a mother and a tired 20-something pinned against a window seat, you’ll understand why three robotic cat’s meows are not as cute.

Maybe I’m justifying my actions, but I determine that if I’d adopted three random cats they might not get along well, and so I decide to place these in separate rooms of my apartment. One goes on the office bookcase, one on the couch, and one sits atop my chest of drawers in my bedroom.

As the week progressed though, I found very little reason to turn them on. The meowing isn’t cute (not to me at least) and since these robo-kitties don’t have the ability to stand up, play, or get into mischief, there isn’t much incentive for me to leave them running. The “cat lady” experiment is dead at this point, because I’m neither outnumbered nor able to give them individual identities, even though I did try.

The one in the office got the most use, particularly when I was reading something or waiting on email responses. I call him “Mr. Kitty” as a “South Park” reference because of the tone of his meows.

I found myself petting Mr. Kitty mindlessly for up to an hour at a time during the work days, just to have something to do with my hands. A robotic cat never gets bored with you, or with being pet, and it doesn’t get up and sprint off in a random direction. I just have to flip his switch off when a phone call comes in, or when I need to do something else.

The problem is, no matter how much you may want to, you can’t do that with the real thing. And while I’m glad the robotic duplicate didn’t hop onto my desk and walk across my keyboard, all I could think was “not quite the real thing” over and over.

The Case for Stress Relief

There was an upside, in the form of hour-long petting sessions I accidentally initiated. Like playing with a stress ball, or that weird pencil spinning trick no one ever taught me in high school, petting the plastic cat becomes somewhat habitual and dramatically dropped my stress levels.

I am a fairly stress-filled person by nature, and I suppose part of the reason I’ve yet to adopt a cat (other than a definitive “no” from my roommate) is that, most likely, taking care of it would bring me extra anxiety.

I can see, at the end of the day, where someone without the means to care for a real cat would have clear and significant therapeutic benefits from a fake cat, for about $100 plus the cost of batteries.

But this isn’t a real cat, and stress balls are way cheaper than $100. You can get a premium stress ball off of Amazon for about $10.

It wasn’t difficult to pack the cats into boxes and mail them away forever after my week. I think that’s telling. Even the reluctant-to-get-the-family-a-dog dad from every 90s Disney movie only took a few days to get attached to a real pet. But the animatronics just aren’t real pets and I just didn’t feel a bond with them.

Even Mr. Kitty, who I’ve bothered to name, doesn’t really bring any emotional baggage to the surface as I gently repack him in his box and seal it up with some packing tape.

Perhaps if the animatronics had looked back at me with sad eyes while I prepared them for shipping, I’d have had a different reaction. But that’s the sort of “alive” Hasbro can’t fake yet. Maybe some day they’ll get to that point. Maybe the cats needed more emotive eyebrows. I cried in “WALL-E” like everyone else, but plastic purring cats didn’t get me there.

I’d like to say that the experiment made me want one of these for myself, but it just didn’t click. And Hasbro gets credit for creating a practice pet for the often-too-rough toddlers who need to be told you can’t pick a kitten up by its tail. But they can do that with their favorite teddy bear, even if Teddy is a $100 piece of functioning animatronic.

So no, it wasn’t for me. But that said, there’s something to be said for “good enough.” Hasbro may not have nailed a replacement for living pets, but they did succeed in creating some improvements to a stuffed animal. And I guess sometimes that’s all you really want.