A major step toward helping humans with paralysis 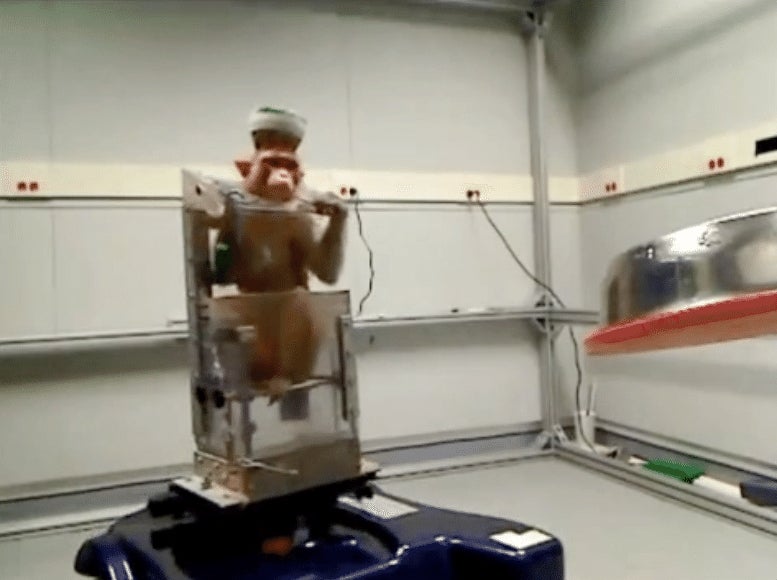 A group of researchers have figured out a way to allow monkeys to control a wheelchair with their minds. The achievement, which uses a brain implant, could soon help even severely paralyzed people to control their wheelchairs, allowing them much more mobility than before.

The researchers think that in the future this method could be employed not only to control wheelchairs, but also other artificial limbs. The research was published today in Scientific Reports.

“We are hoping to start trying this in humans soon.”

The research group, led by Miguel Nicolelis of the Duke University Center for Neuroengineering, implanted the device into the brains of rhesus monkeys, whose brains are most similar to humans. The device works by recording signals from neurons in two regions of the monkeys’ brains involved in movement and sensation.

As motivation to move, the researchers placed a bowl of grapes in the center of a room. As the monkeys thought about moving toward the bowl of grapes, the BMI translated those brain signals into operations performed by the wheelchair, moving it towards the bowl of grapes.

“It took a few tries for the monkeys to get used to it, and some are better than others,” says Nicolelis, but most of them eventually got the hang of it, and if it were used in humans, it would be much easier, he says. “Over time, the device becomes an extension of the animal’s body.” 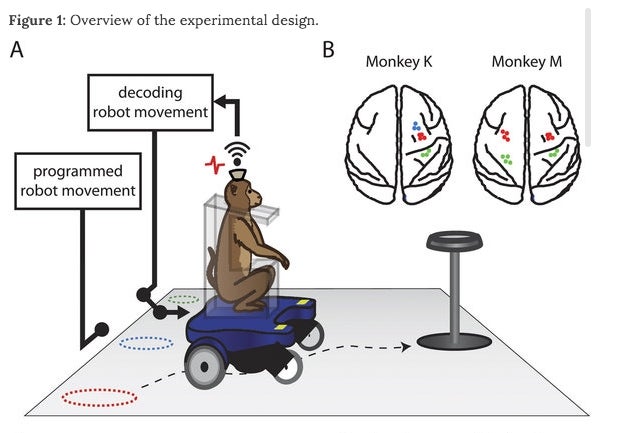 How the experiment worked

The monkey sat in a robotic wheelchair which moved from one of three starting locations to a bowl of grapes. The BMI records the monkey’s brain activity and then sends it to a wireless receiver which allows the wheelchair to move in the direction the monkey had intended.

Interestingly, as the monkeys continued to use the device, it began to pick up on brain activity that showed the monkeys were trying to figure out how far away the bowl of grapes were. “This was not a signal that was present at the beginning of the training, but something that emerged as an effect of the monkeys becoming proficient in this task,” Nicolelis said in a press release. “This was a surprise. It demonstrates the brain’s enormous flexibility to assimilate a device, in this case a wheelchair, and that device’s spatial relationships to the surrounding world.”

“Over time, the device becomes an extension of the animal’s body.”

Similar, noninvasive devices that exist now, which work by using wearable electroencephalograms (EEGs), are more limited and don’t allow for the fine control that these new implantable devices do. And while the devices would need to be placed in the brain surgically, Nicolelis notes that the surgery is only minimally invasive and that because of the major advantages and increase in quality of life that the devices could bring, he believes many people would be open to it. Some of these implants have been left in the monkey’s brains for seven years, and Nicolelis believes they could stay in for much longer.

“I think we are ready to go. We are hoping to start trying this in humans soon,” says Nicolelis.

In the meantime, Nicolelis and his team will continue to try to increase the accuracy and precision of the brain implant by attempting to record more neurons with the machine. This trial recorded 300 neurons, and his team had previously been able to record up to 2,000 at one time; the more neurons recorded, the more precise the movements will be.