If you're at a location in Sweden 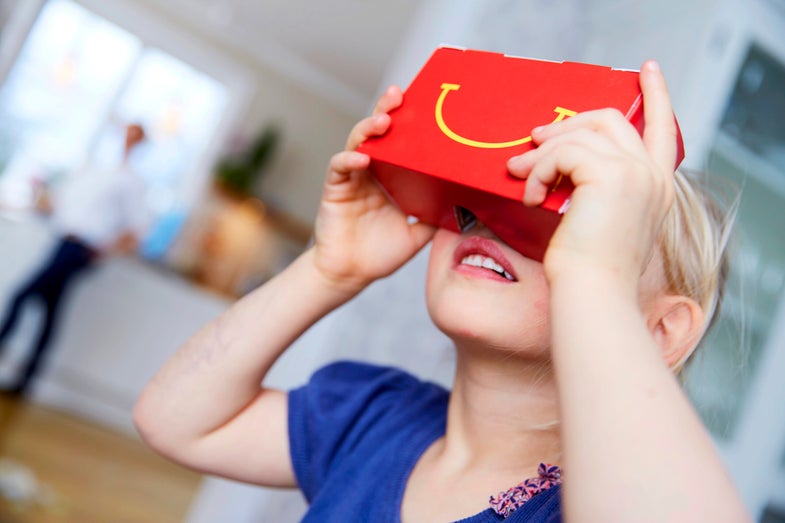 What better way to wash down a burger and fries than with a hearty serving of fresh virtual reality content? That seems to be the thinking out of McDonald’s Sweden, which recently announced a new promotional Happy Meal box that can be quickly turned into a makeshift VR headset.

The approprietly-yet-ominously named “Happy Goggles” is a variant of the classic McDonald’s red-and-yellow, smiling Happy Meal cardboard box, which is now celebrating its 30th anniversary. Except diners can easily re-fold this version along strategically placed perforated lines to form a cradle for their smartphones (sold separately).

Once inside the Happy Goggles box, a smartphone can display VR content from supported apps and games. In this case, the first game specifically designed for the Happy Goggles will be “Slope Stars,” a virtual reality ski simulator endorsed by the Swedish National Ski Team, which will be available for download starting March 4.

It’s extremely close to the idea employed by Google Cardboard, Google’s DIY virtual reality headset (only that one doesn’t come with any fast food inside — at least not yet).

The Happy Goggles VR box will begin rolling out to the 220 McDonald’s locations throughout Sweden this month, and McDonald’s seems convinced it’s a good idea for diners, especially the young audience that Happy Meals are designed to please. The company even cites two psychologists in its press release, writing: “It creates an opportunity for adults to learn from the children’s knowledge and experience. The gaming can also be a good, joint activity that makes it easier to hang out – on equal terms,” says Karl Eder and Fadi Lahdo, licensed psychologists. Sadly, the company doesn’t provide any advice for how diners are supposed to ensure the structural integrity of any VR headsets doused with food grease.

It’s easy to write all this off as just the latest example of McDonald’s chasing fads in its Happy Meal tie-ins. (Remember the Teenie Beanie Babies of the ’90s?) Yet if it does prove popular with diners, the move could encourage more adoption of lite VR content by companies outside the tech and entertainment spaces. Right now, Happy Goggles are confined to McDonald’s locations in Sweden, but they could possibly expand to other countries as well, as a McDonald’s exec told Adweek.