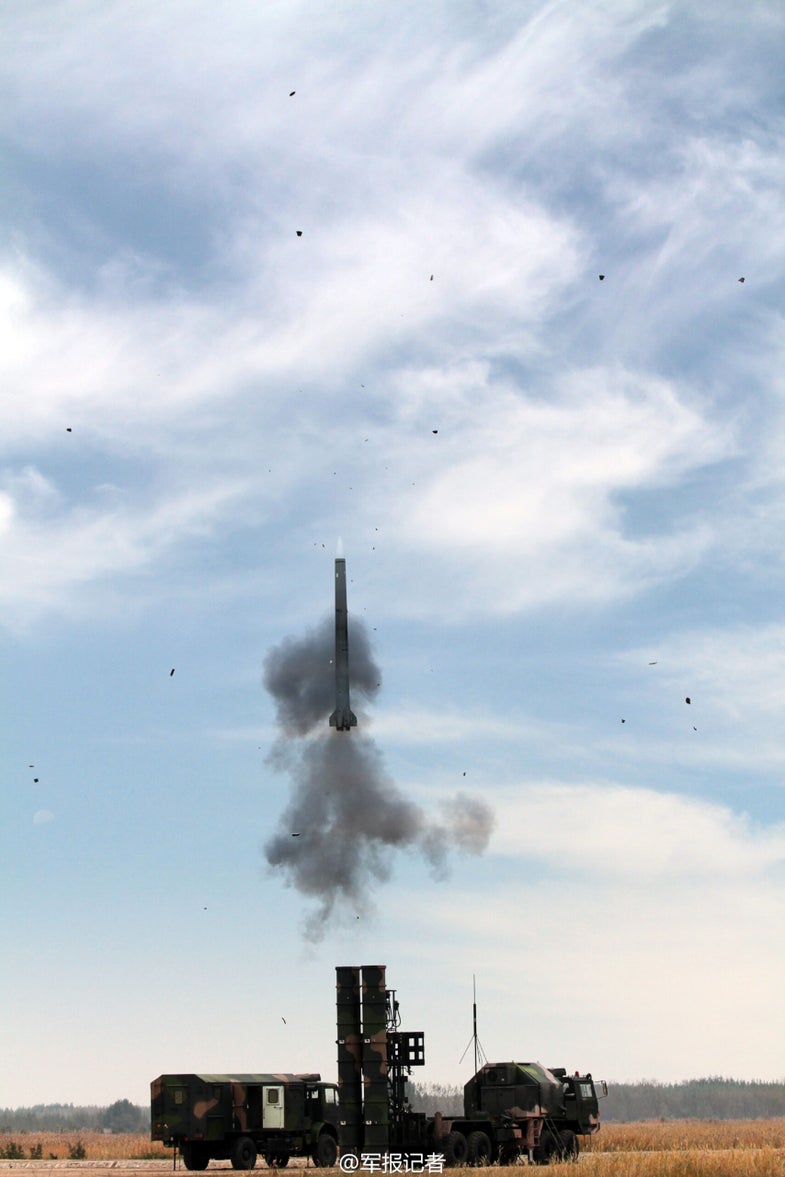 The HQ-9 can destroy hostile aircraft up to 200km away, with a powerful 100+ kg warhead and two stage rocket engine. Its presence on Woody Island provides a powerful reminder of China's growing expeditionary power in Asia. Weibo
SHARE 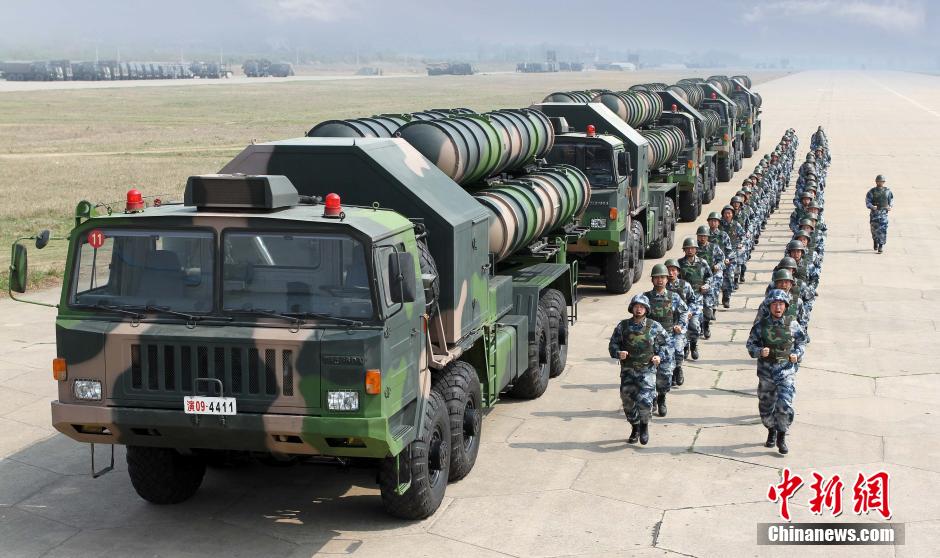 A convoy of HQ-9 TEL vehicles marshals at a PLAAF air base (long range air defenses are operated by Chinese air force units). With a range of 200km, the each HQ-9 launcher extends aerial anti-access zone of over 40,000 square miles.

China is raising up an early February storm in Asia by deploying long-range HQ-9 surface to air missiles (SAM) to Woody Island in the disputed Paracel Island chain. The Paracel Island chain, claimed by China, Taiwan and Vietnam, is a small archipelago located roughly equidistant between Hainan Island and north-central Vietnam. Woody Island itself is home to 1,000 people, has an airport capable of accommodating J-10 and J-11 fighters, and is capital of the Sansha Prefecture, which covers Chinese claims in South China Sea (including overlapping Filipino, Malaysian Taiwanese and Vietnamese claims). 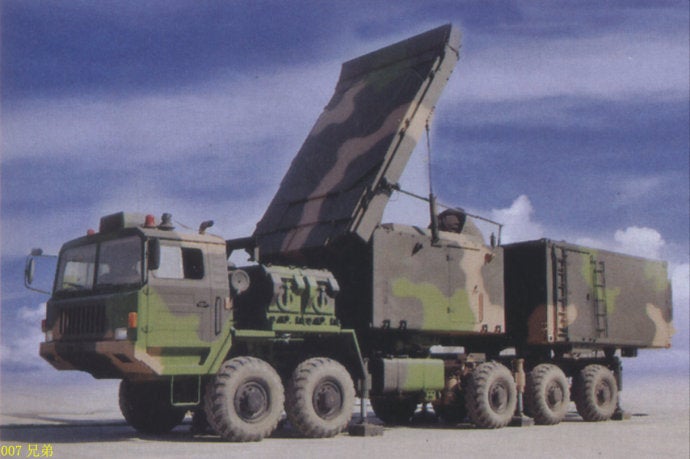 The HT-233 AESA radar, used for fire control of the HQ-9 missiles, can search for targets up to 300km away, and guide six missiles to six separate targets.

Known as the “Red Banner,” the HQ-9 SAM is China’s indigenous long range air defense system, complementing Russian made S-300 missiles. The system is mounted on an 8×8 wheeled truck, each carrying 4 missiles. The missile itself has a top speed of Mach 4.2, range of 200km and a flight ceiling of roughly 27-30km. In addition to the ability to target aircraft, drones and cruise missiles, the HQ-9 also has a limited anti-ballistic missile and anti-surface capability. While the missile currently uses semi-active radar homing and infrared guidance to hit targets, future upgrades would increase range and add on an active radar seeker. Compared to most Patriot and S-300 variants, the HQ-9 uses a more advanced AESA radar, the giant HT-233 truck mounted radar, for its fire control, which offers better performance against enemy jamming and stealth aircraft. The U.S. Defense Department estimated that China had about 96, 4 missile HQ-9 launch vehicles, in addition to over a dozen Type 052C and 052D guided missile destroyers, which respectively can carry 48 and 64 HQ-9 SAMs. The HQ-9 launcher is compact enough, with a height of 3.2 meters, 2.8 meters wide and 10-11 meters long, to fit into the Y-20 heavy transport aircraft, or a Type 726 overcraft. 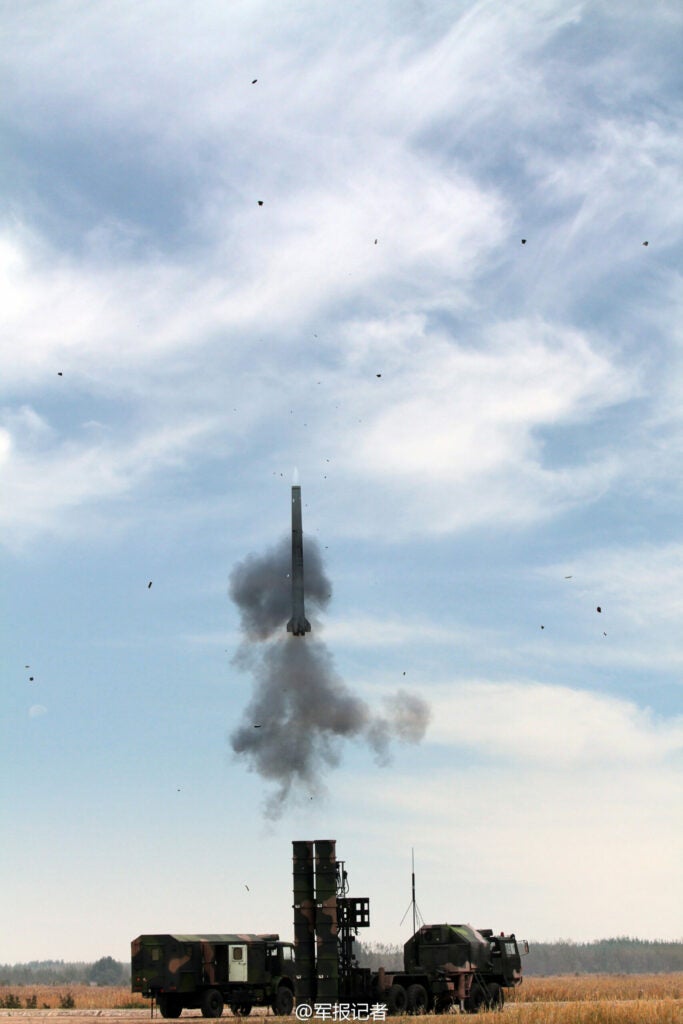 The HQ-9 can destroy hostile aircraft up to 200km away, with a powerful 100+ kg warhead and two stage rocket engine. Its presence on Woody Island provides a powerful reminder of China’s growing expeditionary power in Asia.

The deployment of the Red Banner illustrates how islands, both real and artificially created, can be rapidly militarized even if claimed to be demilitarized. In a crisis, the deployment of such systems can quickly create an air defense bubble surrounding disputed islands and well beyond. However, the timing of the deployment during the U.S.-ASEAN Sunnylands summit seems more to be about sending a strong psychological message in response to recent U.S. naval passages in the South China Sea. Regardless, as Chinese expeditionary capabilities and global deployments grow, the HQ-9 and its successors are likely appear in more and more places beyond Woody Island.