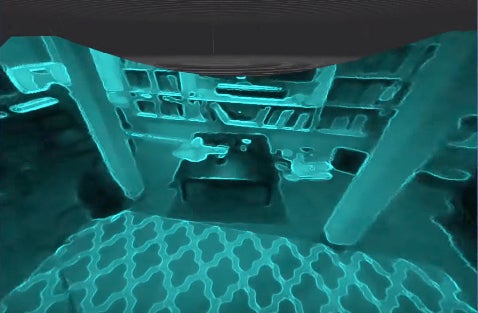 The HTC Vive is one of the two big, expensive ($799), high-powered virtual reality headsets now available for purchase (the other being Facebook’s $599 Oculus Rift). But one unique feature the HTC Vive offers is called “Chaperone”: using a front-facing camera on the headset, combined with two external sensors you’re supposed to mount outside of it, the Vive is able to detect and show you a wireframe view of your real-world surroundings.

This was described to us here at Popular Science as a safety feature, but in practice, it looks just awesome to use, as YouTuber Mr. Zulubo found out. He bills the feature “Tron Mode,” and it’s an apt name, reminiscent to the glowing, inner-arcade game world depicted in the Disney franchise of the same name.

There’s not much more you can actually do in this mode, at least not yet (it’s open to developers to integrate in their apps, so it could appear in some cool VR games and movies). But even this is a huge step up from earlier iterations of VR (I don’t think many people really miss the red and black, 2.5-D world of Nintendo’s Virtual Boy).