A skin-care company builds a futuristic facility to stockpile human tissue. Should you donate? 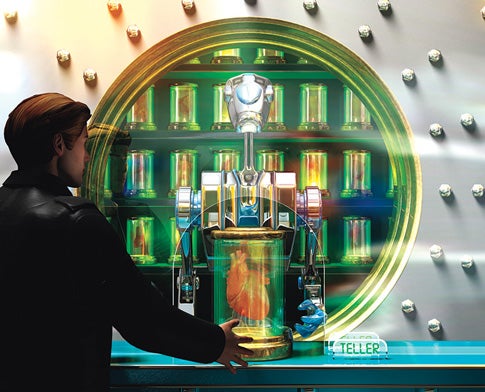 Discarded body tissue is a hot commodity. It’s bought and sold and used for everything from anthrax vaccines to penis-enlargement products. If you donate tissue for research or leave some behind at a doctor’s office after, say, a routine mole removal, those samples are sometimes stored to be used in research or turned into profitable products.

For the most part, this is good; it leads to new drugs and disease cures. But for decades, patients’-rights groups, bioethicists and lawyers have argued that patients should have control over what happens to their tissue once they’ve parted with it. “Those samples contain genetic information that could cause you to lose your insurance,” says Lori Andrews, director of the Institute for Science, Law and Technology at the Illinois Institute of Technology. “Or they may be used in research that violates your personal or religious beliefs.” But scientists have long argued that tracking the desires of each donor would be a logistical nightmare.

Now a California-based maker of skin-care products, Dermacia, has developed technology that it claims will give donors an unprecedented degree of control over their cells. Dermacia, through its subsidiary company National Genecular Institute (NGI), recently sealed a deal with the University of Iowa to create a $76-million “biobank” called BioTrust and other research laboratories. NGI will use the bank’s samples for developing its own products but will also sell samples to researchers worldwide. The company hopes that its 100-acre, partially underground facility, due to open in 2009, will be a model for future biobanks.

“It’s being built to withstand bomb blasts and tornadoes,” says Tannin Fuja, NGI’s chief scientific officer. Plans include a fully automated storage and retrieval system coordinated by a small army of robotic arms. The machines will inscribe bar codes onto samples, spin them in centrifuges, transfer them into vials, transform them into immortal cell lines that grow and divide indefinitely, and file them away in massive computerized freezers.

Experts applaud NGI’s high-tech ambitions, but some worry that the company may be misleading donors about what they’ll get in exchange for their tissues. According to Fuja, BioTrust’s automated process will enable donors to control how their tissue is used and to reap greater benefits from donation. During the consent process, donors will select the studies that they do or do not want done on their tissues, and the computer system will store that data along with the details of their samples. If a scientist wants to purchase samples from, say, African-American males under 40 for a study on alcoholism, a computer will generate a list of samples fitting the criteria of race, age and willingness to participate in alcoholism research.

BioTrust also plans on an unusual, interactive donor-bank relationship: Donors will be asked to log onto a Web site to update their medical information, which will be linked to their tissue sample through a code number. Tissues often aren’t connected to medical records in this way because of concerns over privacy and genetic discrimination. But personalized samples are much more valuable than anonymous ones. If scientists know that you have a family history of, for example, Parkinson’s disease, they can compare your samples with those of others with a similar history to help find a genetic cause and, hopefully, a treatment.

In return for their time and tissues, Fuja says, “donors can ask to be notified about how their samples are used in research” and whether that research leads to advances that might benefit them. But NGI makes no guarantees. Its consent form states that the company is under no obligation to share medical information with donors or to alert them of new products or clinical trials that might help them. Andrews takes issue with this arrangement. “BioTrust is a for-profit venture,” she says. “NGI will benefit tremendously from these tissues. Why shouldn’t the donors be treated like partners?” If NGI fulfills its promise of giving donors control over their tissues, however, it may be a step in the right direction.