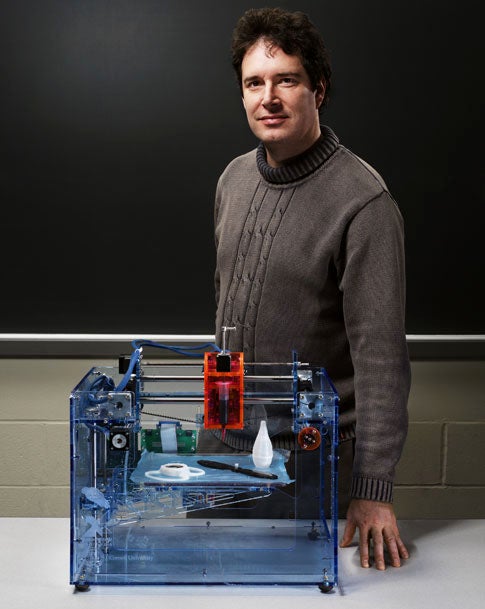 As a child, Hod Lipson lost Lego pieces constantly. Now the 39-year-old director of Cornell University’s Computational Synthesis Lab can build replacement parts on the spot. Completed last year, Lipson’s fabrication machine, called a “fabber,” can print thousands of three-dimensional objects, everything from toy parts to artificial muscles, using dozens of materials, including PlayDoh, peanut butter and silicone, by following simple directions sent to it by a PC.

About the size of a microwave, the fabber costs $2,300 to assemble-roughly one tenth the cost of commercial 3-D printers. Lipson and his graduate student Evan Malone recently launched a Web site called Fab@Home (fabathome.org) to teach people how to build their own fabbers and encourage them to share their blueprints online. As a result, amateur inventors worldwide are now manufacturing their creations from the comfort of their own homes. The duo´s next step is to make a desktop machine that prints other machines, such as robots, complete with circuit boards. As soon as a robot walks out of the printer, Lipson says, Malone can walk out of the lab with his Ph.D.

Q: What sort of things are people printing with your fabber?

A: Watchbands, squirt bottles, batteries, artificial muscles, even fancy chocolates. What you print is really up to you.

Q: How long does it take to print something like a Lego piece?

A: About two hours. The printer isn´t fast or efficient, but you don´t need to know a thing about manufacturing to use it.

Q: Wouldn´t it be cheaper, faster and easier to just go buy a new piece?

A: The only way to make something cheaply today is to have it mass-produced. For example, you wear the same shoes as everyone else. If you had a fabber, you could custom-make shoes that perfectly fit your feet. Three-dimensional printing will help us move away from the mass consumption that is so deeply ingrained in our culture.

Q: You´ve said you´re taking a lesson from the Altair 8800, a do-it-yourself computer kit that inspired the PC. Why?

A: Similar to computer technology in the ´60s, 3-D printing is a universal technology that has the potential to revolutionize our life by enabling individuals to design and manufacture things. Worrying about how you´re going to make something is a huge constraint-most people can´t make anything at home because it´s too expensive. We want as many people as possible to get their hands on this technology, experiment with it, improve it, and develop new applications for it.

Q: With all of the programs and product designs posted on Fab@Home, are you making a profit?

A: We´ve put everything out in a completely free way, no limitations. The Altair people never became rich, but they made history. We´re after that kind of impact. We just want people to use the technology to free their design creativity. Similar to sharing MP3s, people can exchange blueprints of product designs on the site. Maybe someday they´ll earn 99 cents every time their blueprint is printed.

A: Oh yeah. This is going to make MP3 copyrights look like a piece of cake.

Q: Noy Schaal, a high-schooler in Kentucky, won first prize at a science fair for using a fabber to build a chocolate map of the Bluegrass State. Is she the kind of everyday user you have in mind?

A: Noy is an excellent example of how you can explore the fabber without much training. I´m really hoping this will pass the geek barrier. I want the technology to reach people who want to make cool stuff out of exotic materials but have no way of doing it. For example, you can put cheese in the fabber but not in a conventional manufacturing machine because you´ll void its warranty.The fabber is more about allowing designers to experiment with ideas than making anything in particular.

Q: What´s the most extreme use you have in mind for this technology?
A: I want a printer to be all we need to send on long-term space explorations. After landing, it would print a robot that could walk out of the printer, batteries included. If the robot discovers a cave that requires a special tool to explore with, it could head back to the printer to make the right gadget. And if the robot breaks, just print another one.