Duct Tape Methods to Save the Earth: Insulate the Glaciers

Huge blankets in the Alps could prevent a big thaw 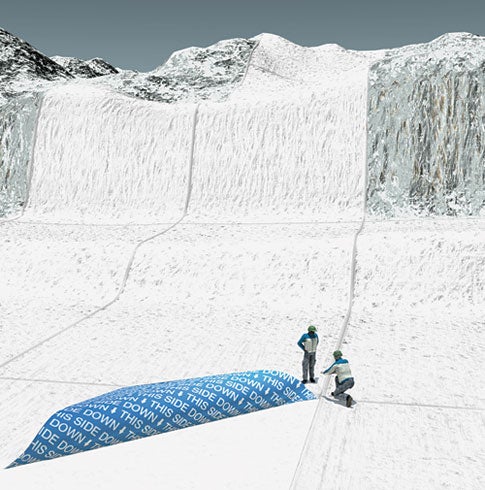 Easy Does it: Six people can roll out 15 of these 330-foot glacier blankets in two weeks.

The Problem
Glaciers-Earth’s largest freshwater reservoir, collectively covering an area the size of South America-are melting away, shrinking by up to hundreds of feet per year in some places. The Alps alone stand to lose three quarters of its glaciers by 2050, and what’s left by the end of the century.

The Fix
Wrap thawing glaciers in football-field-size synthetic blankets that keep the cold in and the heat out. At least that’s what ski resorts in the Swiss Alps are doing. Tired of risking the fate of their industry on the global community’s ability to get a grip on rapid climate change, more than a dozen resorts turned to local textile company Fritz Landolt to stop the melting. Called the Ice Protector, Landolt’s material is a tough but lightweight dual-layer composite. On top is polyester to reflect ultraviolet light, and on the bottom is polypropylene, a polymer used in military clothing and auto parts, to block heat. When wrapped around a glacier, it prevents the top snow layer-and, it’s hoped, the permanent ice underneath-from melting in the summer sun.

After a small pilot project in 2005 on the shrinking Gurschen glacier proved hugely successful-the blanketed area had 80 percent less melt than surrounding ice and snow two years in a row-Landolt has been tackling bigger and bigger ice packs, including an area the size of six football fields (more than 300,000 square feet) on the Vorab glacier, home to one of Switzerland’s largest ski resorts.

Next Steps
Don’t count on the blankets saving the snows of Kilimanjaro. With the ski resorts footing the bill, their use is limited to critical areas where melt directly interferes with skiing and snowboarding. But there’s always the burgeoning beer market. “We had a guy throwing an outdoor party last summer,” says Landolt product manager Marcel Stahle. “We sold him 100 square feet. His beer stayed cold all day.”

**More Duct Tape Methods to Save the Earth: