Tips for driving safely in the iciest conditions

Prepare for the unexpected. 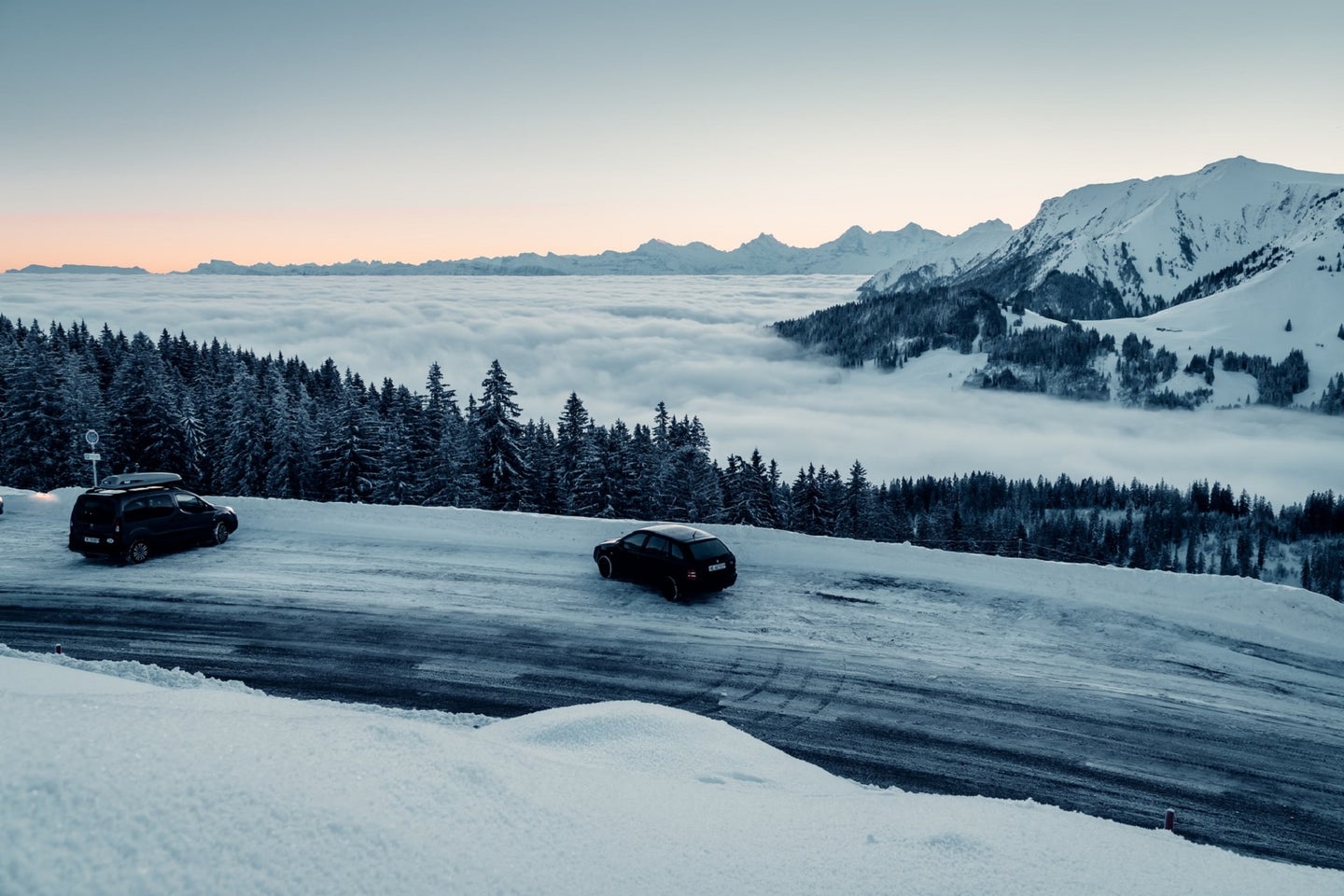 You could hit black ice while driving down a dangerous mountain pass–or across a Dunkin Donuts parking lot. Alain/Unsplash
SHARE

This story is excerpted from Car Bibles.

The only way to prepare for black ice is by increasing your knowledge about what it is and the danger it creates. Know thy enemy, as it were. The more you learn, the better chance you have to safely handle your encounters with the gnarly stuff.

Unlike snow, oil, or other road obstacles, black ice is typically quite difficult to identify from a distance, and thus, it’s nearly impossible to avoid it. You’ll most likely know you’re on black ice when you’re on top of it and your wheels start to spin and the car slides.

The prospect of hitting black ice can sound terrifying, but Car Bibles has the remedy for all of the worry warts out there. Follow along as we teach you what black ice is and how to manage it. Let’s get started.

What is black ice?

To be completely clear, black ice is not black. Black ice is a see-through sheet of ice that has thinly formed over the pavement, which is typically black. So, it’s ice that appears to be black, or whatever color the pavement beneath the ice is. Due to its transparent nature, black ice looks like a wet spot or like nothing at all

How do you identify black ice?

The problem with black ice is that it’s virtually invisible to see until you’re right on top of it, slipping and sliding around. Not only is it difficult to see on the road, it sometimes hides underneath a light snow covering. Basically, you will not be able to identify it while you’re driving unless you’re driving extremely slow.

A minuscule layer of freezing water creates black ice, so there is no one specific thing that causes this to happen. It can occur any time the pavement becomes wet and the temperature hits the freezing point. Below, we run through a few examples of how this might occur.

Snow melts during the day and freezes at night

This is one of the most common reasons black ice will form. It snows during the day, it stops snowing and the sun comes out, the snow melts, the sun goes down, the air and ground get cold, and the leftover moisture on the roads freezes.

Dips in the pavement that create thin puddles

Generally, you never want water to collect on a road, regardless of whether or not it’s frozen. That’s why crowned roads exist. However, we know roads only stay nice for a few months after they’re paved before small cracks and dips start to form. If there are slight dips, small pools of water could form, and if they’re thin enough, they’ll create invisible ice spots.

Wherever there’s light rain at the freezing point

If the temperature is fluctuating around the freezing point, you might encounter misting or light rain because the air is not cold enough to form actual snow. However, once that mist or rain hits the ground, the surface might be cold enough to freeze that precipitation, so black ice could quickly form in real-time while it’s sleeting or raining.

Sleet is essentially wet ice, and if it sleets on an area that is not frequented often, ice could quickly form and create dangerous spots that are incredibly difficult to see.

Drains that empty on driveways or underpasses

Even when it’s extremely cold, the sun or other factors could melt snow and ice that’s already on the ground or on top of a building. If the water from this melting drains out onto a road, that’s a hot spot for black ice. Because the temperature is already cold, the water will go down the drain, spread out, and freeze.

Where is black ice most commonly found?

Black ice can occur anywhere, including the middle of a highway, but there are a few areas where black ice might be a more common occurrence. Be extra careful around these areas during icy weather.

The sun is an extremely powerful ice deterrent and helps melt ice as it’s forming. If an area is shaded, it doesn’t benefit from this heat, and it is more susceptible to cooler ground, which could lead to quicker freezing. This might be found between buildings, underneath an overpass, in wooded areas, or wherever you might find shade.

In cold weather, elevated roads like bridges are chilled from the top, bottom, left, and right, so they are often at a much lower temperature than the rest of the normal roads that are in the ground. This is why you often see signs before bridges that warn the bridge might be icy.

Be careful if you’re entering a relatively empty parking lot either at night or in the early morning. If cars haven’t driven around to break up any surface ice, and the sun hasn’t been around to melt it, you might encounter some icy patches.

Higher elevations where condensation occurs due to the road heating up during the day and chilling rapidly at night are common areas where black ice can be found too. Add that snow is more likely to form there and then melt with the day’s intense sun, and black ice is bound to be an issue.

What should you do if you hit black ice?

Gently release the throttle, maintain your steering line, and then nothing. Seriously. When a vehicle is on top of an ice patch, it has virtually zero grip, so inputs will do virtually nothing. You also won’t know when the black ice starts or ends, so changing your steering or throttle inputs could actually make things worse if your tires find grip at an odd angle. Furthermore, braking could shift your vehicle’s weight in the wrong direction.

How do you brake on black ice?

You don’t. Don’t do it. If you are aware that conditions are questionable, reduce your speed to lessen the chance of an accident.

I was once on a Michigan highway doing about 50-60 mph while it was snowing in the winter. During some light steering inputs, I felt the car completely lose traction to the point it felt like I was an inflatable donut on a ski hill. The sensation lasted a couple of seconds before the car regained its footing and kept driving straight. Had I hit the brakes, I could have interrupted the car’s line, caused others to brake, and potentially created a dangerous situation for me and/or others.

This is an easy thing to say, but it’s much harder to do, especially if you hit black ice while you’re turning, going around a corner, or are headed toward a stop sign. Still, our advice remains the same. It’s better to slide into a ditch than spin into another car.

You might not know when you’re going to hit black ice, but you can generally shift your driving techniques and preparation during winter driving amidst snow, slush, ice, and polar vortex gremlins. Use these tips to protect yourself from precarious situations.

Read the rest of the story, including an FAQ, over at Car Bibles.