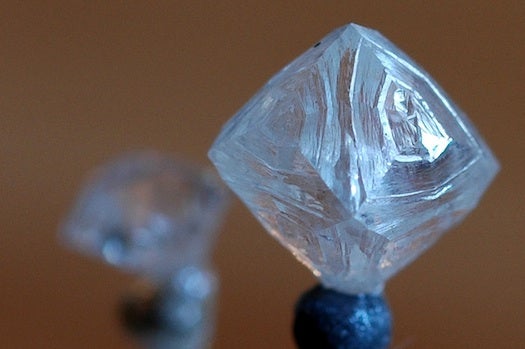 Yowch. Researchers have gotten water to etch diamond by trapping the water next to the diamond’s surface and heating the water to its supercritical phase.

They had wanted to know how diamond and graphene–both made of carbon atoms, but arranged very differently–would interact at high temperatures, Loh Kian Ping, the research team’s leader and a chemist at the National University of Singapore, told Popular Science in an email. Graphene is a sheet made of a single layer of carbon atoms, while in diamond, the carbon is arranged in a crystal structure.

Loh and his colleagues wet a graphene membrane and laid it on a crystal of diamond. They then heated the whole deal to about 1,275 degrees Kelvin, or 1,835 degrees Fahrenheit.

At that point, the graphene began bonding to the diamond, putting the water trapped between the two under ultra high pressure. Meanwhile, the water reached its supercritical temperature, which means its liquid and vapor phases exist in equilibrium, as the University of Leeds explains, and there is “no longer any distinction between the liquid and vapor phases,” as this paper explains. The supercritical water corroded tiny squares into the diamond. Superheated water has never been shown to corrode diamond before, Loh says.

Loh and his colleagues published a paper about their work in the journal Nature Communications.

National University of Singapore on PhysOrg