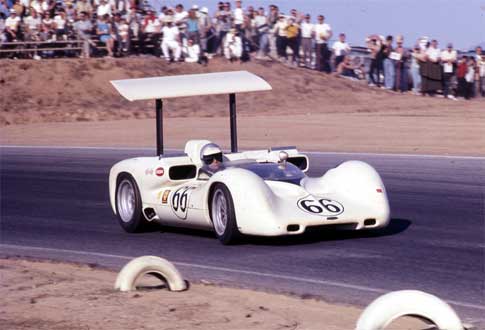 Cut Down to Size

The Chaparral 2E Can-Am car–driven here by its creator, Jim Hall, in 1966–was the first to methodically exploit the benefits of downforce. It was outlawed because the rear wing was mounted to the suspension and could be adjusted by the driver.

Trevor Harris is laughing so hard, A waiter stops by to make sure everything’s OK. Harris can’t speak, so he just waves him away. Ten seconds pass. Twenty. Thirty. Finally he masters his breathing and dabs at his eyes. “And the crowd would be going crazy,” he says, still chuckling despite his best efforts, “because the driver would be near death.” Another laughing jag. “Not because the racing is so dangerous,” he wheezes, the words escaping in a rush, “but because his blood vessels are on the verge of exploding!”

Harris isn’t a contemporary Caligula salivating over a twisted 21st-century blood sport. He’s an innovative engineer who’s designed some of the most successful and iconoclastic racecars in motorsports history. But nothing he’s created during a career spanning the Daytona 24 Hours and the Baja 1000 comes anywhere close to the bizarro vehicle he is now envisioning for the racecar formula I’ve suggested.

Imagine, I´d said, a series with no rules. None. Zero. Zilch. The sky´s the limit. Any technology you can imagine. All the time and money you need to develop it. What kind of car would you create?

Harris´s salad goes uneaten. His wine goes undrunk. Thinking on the fly, he methodically works his way through the aero package, the chassis, engine options, braking systems, you name it. The conversation ranges far and wide. Then, suddenly, it stops. With Harris, a world-class talker, this is cause for concern. “This is ridiculous,” he says, snorting with equal parts derision and amusement. “Oh, this is going to get ugly.”

Pretty soon we’re both laughing uncontrollably, although to be honest, I’m not sure what’s so funny. “Preston, this is what’s going to happen,” he says. “For the first time ever, we’re going to have racecars that test the limits of human endurance. So instead of engineers in the pits watching telemetry from the cars, we’re going to have a bunch of guys in lab coats monitoring the drivers’ vital signs. We’ll have Dr. Blood Pressure and Dr. Blood Oxygenation Level and Dr. Heart Rate.” This prompts a new wave of laughter. “It won’t be racing at all!” he says. “It’ll be a war of drug companies and Ph.D. medicos!”

For much of the 20th century, racing was to automobiles what war was to airplanes-the crucible for technological breakthroughs. The rearview mirror debuted at the Indianapolis Motor Speedway in 1911, and disc brakes were proven on the road circuits of Europe in the 1950s. “Racing improves the breed” wasn’t mere advertising; it was a truth revealed every Sunday from the chicanes of Le Mans to the salt flats of Bonneville to dirt ovals in Podunksville, U.S.A.

It all started to go wrong in the ’60s, when engineers brought new technical sophistication to the sport, and the influx of millions of dollars in corporate sponsorship allowed them to play Mr. Wizard. Speeds made a quantum leap. Ditto driver fatalities. Ever since, Job One of the rule-makers has been to slow the cars down. And they’ve done it, for the most part, by banning leading-edge technology.

The result, ironically, is that contemporary racecars are, in many respects, less sophisticated than everyday econoboxes. “People talk about technology trickledown,” says British aerodynamicist Mark Handford. “But it’s tosh, really. If you look at the spec sheet for an E-Class Mercedes, you’ll find electronic stability control and next-generation antilock brakes and all sorts of other things that are illegal in Formula 1. It’s so frustrating to have all this technology and not be able to use it. If you want racing to be dynamic, to encourage innovation and get people excited about engineering, then the ideal formula could be written on a single piece of paper.”

Modern motorsports rule books are tomes of dense engineering specifications. But historically, the least restrictive rules have produced the most imaginative racecars. So what would happen, we at PopSci wondered, if we trashed the rule book? “It all depends on what kind of circuits you’re going to race on,” says Tony Southgate, a British designer whose cars have won at Indy, Le Mans and Monaco. “And realistically, you have to have some rules, or you could design a car so wide that nobody could pass you or something ridiculous like that.” OK, so the car’s got to have wheels; any number will do. It has to be able to run a two-hour race at Le Mans, a circuit that features a challenging mix of long straights and tight corners. Dimensions? Bigger than a breadbox and smaller than, say, a Hummer.

The aero front is where engineers face the tightest restrictions. Ergo, it’s where, unfettered, they can make the biggest gains. The first step, paradoxically, would likely be to clip the wings. Say what? Don’t wings produce downforce, exerting a vertical load on cars and enabling them to corner like they’re on rails? They sure do. In fact, the first generation of wings-inverted wings, to be accurate-caused lap speeds at Indy to skyrocket from 170 to 196 miles an hour between 1970 and 1972. But by the end of the decade, aerodynamicists had discovered a far more efficient way to generate downforce. Known as ground effects, this entailed fashioning an underwing-venturi-shaped tunnels carved from the bottom of the chassis-that creates a traction-enhancing low-pressure zone between the car and the road.

Ground effects worked so well that rules were immediately instituted to limit the size and shape of the underwing. But absent any restrictions, designers would create huge tunnels to corral as much air-and generate as much downforce-as possible. To increase efficiency, the tunnels would be sealed with “skirts” that would descend on command to rub against the pavement. Modern Formula 1 cars can generate about 2,500 pounds of downforce at 150 mph. With an anything- goes format, 10 times that much would be within reach.

But wait, there’s more! Besides ground effects, designers would use suction-think vacuum cleaner-to develop additional traction. “It’s so much more effective than anything else,” says Paul VanValkenburgh, a car journalist and former engineer at Chevrolet Research and Development. There, in 1968, VanValkenburgh rigged a test chassis with a fan that sucked the car to the ground. A similar system was implemented in the Chaparral 2J Can-Am racer in 1970, and although the “sucker car” didn’t win any races, it was so fast that vacuum technology was immediately banned. (In Formula 1 racing, a conceptually similar fan car won its only race in 1978 before being legislated into oblivion.)

The suction fan would either be powered by an auxiliary motor or run off the main engine. Unlike ground effects, vacuum suction isn’t speed-dependent, so it develops great gobs of grip even in slow corners. Put vacuum technology and ground effects together, and you´re looking at negative lift-over-drag ratios of as much as 20-to-1. (Modern racecars top out around 3-to-1.) And maximum G-forces in the turns, which now range from 3 to 5, would easily double or even triple.

This will translate into cornering speeds so preposterous that humans may not be able to keep up. Three years ago, an Indy car race at Texas Motor Speedway was canceled after most of the drivers experienced headaches and dizziness-and that was at a mere 235 mph. It turned out their symptoms were probably caused by inner-ear imbalances due in part to high G-forces. And as speeds ratchet up beyond 300 mph, G-loads are going to get worse, making drivers look like those poor astronauts-in-training wearing ghoulish, stretch-face grins while riding high-speed centrifuges.

And drivers aren’t the only ones who might look weird. Another consequence of a no-rules aero package is that cars wouldn’t resemble the missiles we’re accustomed to seeing. The wheels would be enclosed to minimize drag. So would the cockpit. But ground effects and suction technology work best in big areas rather than small, arguing for a large, boxy shape. “The ideal sucker body is a pickup truck,” says Lee Dykstra, technology director for the Champ Car series. Then again, the bodywork could be designed to change shape as circumstances warrant-angling straight up to serve as an air brake, for example. “Computers would allow you to use variable aerodynamics,” says designer John Ward, a race engineer in the Indy Racing League, “so you’d decrease drag on the straights and increase downforce in the corners.”

After aerodynamics, power plants take pride of place in the no-limits race. Rockets merit consideration-retro-
rockets might be used to help a car turn and stop-and even nukes get a few votes. Hey, while we’re at it, why don’t we dust off the flux capacitor in Michael J. Fox’s DeLorean? But seriously, folks, small gas turbines are the most attractive alternative to conventional four-stroke piston engines. In fact, cars powered by modified Pratt & Whitney helicopter turbines coulda woulda shoulda won the Indy 500 in 1967 and 1968 before (stop me if this is getting repetitious) being effectively outlawed. Turbines boast superlative power-to-weight ratios, and they’re smaller and torquier than four-stroke piston engines. Also, thrust could be vectored, or angled, to help turn the car. What’s not to like? Well, turbines suffer from throttle lag: They take time to spool up to speed, and they take more time to slow back down-not a good combo for racing.
That problem isn’t unsolvable. But why bother? A quarter of a century ago, using exotic fuels and turbochargers running unlimited boost, Indy engine builders pumped 1,000 horsepower out of the venerable Offenhauser, a piston-engine design whose architecture predated World War II. The gargantuan engines in today’s Top Fuel-class dragsters, which aren’t much younger, make a whopping 6,000 horsepower (though, admittedly, only for a few awe-inspiring seconds). Contemporary Formula 1 cars get 900 horsepower out of 3.0 liters, or 300 horses per liter, without forced induction. “If we could use turbochargers and superchargers,” says Robert Clarke, vice president of Honda Performance Development, “1,000 to 1,200 horsepower per liter wouldn’t be unreasonable.”

But the issue, it turns out, isn’t how much horsepower we want. It’s how much we can use. “The first limitation might be the temperature-absorption capability of the tires’ rubber,” VanValkenburgh says. “The second limitation might be how long the rubber can sustain that abuse. The third limitation might be how long the track can sustain that sort of abuse.” br/>
Loads on a tire, whether vertical (from downforce) or lateral (from cornering), cause temperatures to rise. This is a good thing-up to a point. Dale Harrigle, an engineer at Bridgestone/Firestone’s Akron technical center, says his company’s Indy car tires develop maximum grip at 180