Cool. Where Can I Get One?

1O vehicles that have innovative technology not available stateside.

British chauffeur Richard Lewis recently led a caravan of Range Rovers and Jaguars
through the back roads of Warwickshire to the Butchers Arms pub in the wee
town of Priors Hardwick. A mere 20-minute drive it was, but when Lewis got
the assignment he frantically keyed the destination into every vehicle’s sat-nav system and still, once under way, monitored the caravan’s
progress by cellphone.

Can’t be too sure, in a place where poor signage, indifferent lane markings,
streets that unexpectedly change name in mid-stride and other charms of 2,000-plus
years of road-building make for a navigational minefield.

All technology, to paraphrase the politician, is local: While Americans were
still regarding in-dash nav systems as a novelty, the technology was being
hammered out in the ancient cities of Europe. Ditto in Japan, where the notoriously
indecipherable urban infrastructure of Tokyo, for example, means that building
addresses don’t run in numerical order, but in the chronological order in which
the buildings were built.

It can be a culture shock for an American to see that there’s more varied technology, and sometimes higher technology, in someone else’s backyard. Curbside at Tokyo’s Narita Airport, for example, where the American early adopter turns green after confirming that most basic cellphones are chic-er, cooler, more Web-enabled. On the road, he sees a strange variety of nifty new cars designed to solve local energy-cost and space-squeeze problems. Their economy may be going down the drain, but the Japanese, according to W. David Marx, an editor at bilingual Tokion magazine in New York, have â€no
guilt whatsoever about throwing away old technology and embracing new technology.”

No one has accused Americans of a reluctance to throw stuff away, of course,
but when it comes to cars the focus is not so much on the bleeding edge as
the reliable middle. Jim Bulin, whose outfit, The Bulin Group, studies how
different cultures and age groups approach cars, thinks that Americans appreciate
innovation as much as Europeans and Asians, but that we’re less interested in the newest gadgets than in reliability: â€Make
it more trouble-free. Make it more convenient. Keep me out of the dealership.”

Funky hybrid minivans, roadsters with interchangeable body parts, turbo-diesel
cars that get 90-plus mpg, four-wheel-drive subcompacts-these don’t fit into that picture. Americans value power over efficiency, size over performance. Were it even legal, the latest nifty kei car-built for Japanese microcar parking spaces-would
get squashed like a bug in a market where the hottest SUV is kissing cousin
to a military vehicle.

Sure, America appears to be getting serious about next-generation automotive
technologies, like fuel cells. And, simply by virtue of the size of our market,
American customers eventually see most of the new auto tech. Yet product introductions
lag behind offerings in Europe and Asia, where new technologies are tested
and tweaked. Hence you can’t yet buy the cars on the following pages. Let’s see what you’re
missing.

Nissan recently introduced what it calls e-4WD to a vehicle smaller and odder
than anything on the road in America. To understand the â€tall wagon” Cube, think minivan, go micro, then push the roof up. With e-4WD, the Cube and the March-a sub-compact sedan-get
the lightest, cheapest four-wheel-drive system on the market, along with continuously
variable transmissions. A separate electric motor powers the rear wheels only
when the system senses a need. The rear-mounted wheel motor allows Nissan to
shoehorn four-wheel drive into small vehicles without employing a driveshaft
or transfer case that would intrude.

Vehicles this size in America, when they even exist, usually don’t feature 4WD-even if, as Ford showed with the Focus, traction control is an attractive offering on a small car. Many American off-roaders believe that true four-wheel drive requires a locking center differential, or at least viscous
coupling. But the Cube isn’t designed to roar up Mount Fuji; 4WD for city streets is a different matter. The competition in the small-car market in tiny Japan explains the proliferation of goodies like e-4WD on inexpensive cars. The Cube is supposed to be â€naughty, relaxing, compact and agile.” Right.

Will dodge a street snafu, in real time.

For in-car navigation to really do its job, it needs to talk to a system that
knows what’s up on local roads. This you get with the new Saab 9-3 system-at
least in London, where it will interact with a computer infrastructure to provide
real-time traffic updates.

The system is the creation of a league of traffic information gatherers-broadcasters, carmakers, Internet service providers-under the umbrella of an organization called the Traffic Message Channel, or TMC. It generates and pools information about traffic jams within London, then broadcasts a digital radio signal. The Saab’s navigation system displays the location of the jam and, if the jam is near the planned route, reroutes. Although the basic navigation system will appear in American Saabs in 2004, our cities haven’t yet built a traffic-monitoring system like London’s, meaning your GPS system will happily guide you into traffic hell as long as it’s
on your route.

Once was merely cute, now gets cool.

The new Smart roadster from DaimlerChrysler is an attempt to give the company’s ultracompact city-car platform some sports-car appeal as DaimlerChrysler seeks to expand the line and, it hopes, eventually introduce the Smart into the United States. The roadster weighs less than 1,750 pounds, but with an engine that displaces less than a liter, this is no rocket. (DaimlerChrysler promises an â€extremely sporty variant,” but doesn’t say when.) The most interesting technology remains the replaceable body panels, which allow drivers to change their car from, say, Jack Black (color, not actor) to Champagne Remix. The lightweight panels attach to the car’s frame with simple plastic fasteners, designed for relatively easy removal and reattachment. They’re made of recyclable thermoplastic capable of â€reversible deformation,” meaning
most dents will spring back. In Europe, custom Smart color combos proliferate.

Will we get Smart? Depends on whether DaimlerChrysler can cram emissions systems into
the compact space or find another solution. Skeptics say no one wants a car this tiny, but
wants tend to change as streets get clogged.

Like hybrids now in America, the Japan-sold Estima begins by coupling an electric
motor with a gasoline engine and uses the pair to power its front wheels. But
the Estima adds another electric motor, this one powering the rear wheels,
providing extra go when needed. Voil, the
first hybrid minivan that is also 4WD (the rear-wheel electric motor tactic
for urban 4WD has also been employed by Nissan in its Cube and March vehicles;
see previous spread). The separate rear electric motor yields an interesting
electronic traction system: No need for a bevy of sensors to
monitor tire grip on all four corners; the Estima traction
system simply responds to the amount of effort the rear motor must put out.

In effect, the rear motor manages the complexities of traction control. With
it, â€you can save about nine computers you’d have to have under the dash,” according to Paul Williamsen, Toyota’s
engineer-at-large and curriculum manager for the University of Toyota, an all-things-Toyota
school located in Southern California.

Ah, but the whole system-which also uses regenerative braking to convert the car’s kinetic energy into juice for the battery-is probably too complex for the American minivan market, which focuses on people-carrying and strategic cupholder proliferation. No plans, at any rate, to introduce the technology to Toyota’s U.S.-sold Sienna. For now, the
Estima’s performance in Japan serves mainly as a litmus test of advanced technology.

Let’s talk manufacturing: The Transit is an example of the sort of production smarts we hope to see more of in the future. The ugliest vehicle on our list serves, as Ford spokeswoman Jennifer Flake puts it, as â€the equivalent of the FedEx truck” for all of Europe. â€It’s kind of a cross between the E-Series (Econoline) and F-Series.” It’s used for a million purposes in a score of countries with varying weather and road conditions. All of which explains why Ford decided to offer customers a chance to choose front- or rear-wheel-drive configurations-and
then build both versions on the same assembly line. Typically truckers prefer
rear-wheel drive for heavy payloads and towing, but some opt for the Transit
in front-wheel drive for added traction. Front-wheel drive also eliminates
the bulk of a driveshaft, which lowers the floor by 4 inches.

Ford of Europe’s Nicholas Martinos says the flexibility begins with â€unusual commonality between our components for the front drive and the rear drive.” Transit engineers had to make the â€locating points”-the points on the frame where the assembly line affixes the powertrain-the
same for different drivetrain configurations. The resulting platform is so
flexible that technicians could theoretically change an already-built truck
from front- to rear-wheel drive in about 30 minutes.

A lot of performance progress has been made in Europe since diesels faded from
American highways in the early ’80s, but there’s been virtually no second act on our roads because of emission concerns. Now HDi direct-injection diesel powerplants on the Citron
C5 and C8 provide a long-anticipated breakthrough: a filter to trap and burn
diesel-combustion particles into more acceptable carbon dioxide gas.

For the sponge-like hunk of silicon carbide to work, the
C5 must boost the normal exhaust temperature (about 302 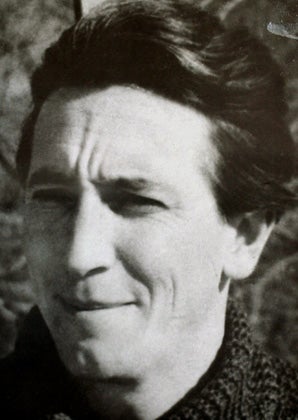 In 1978 Georgi Markov, a Bulgarian dissident, was waiting for a bus near London’s Waterloo Bridge when a man jabbed him with an umbrella and disappeared in a taxi. Within days, Markov was dead. Doctors discovered a tiny metal pellet lodged in the dead man’s thigh. The pellet, injected through the tip of the umbrella, contained the poison ricin. 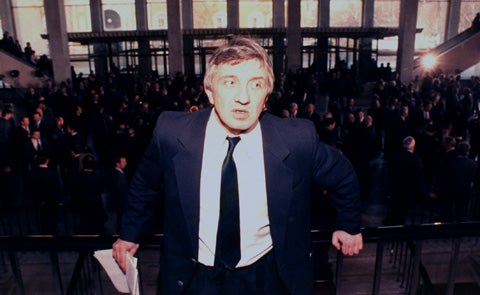 Since Putin came to power in 2000, dissidents have reentered the line of fire. In 2003, Yuri Shchekochikhin, a journalist and parliament member investigating corruption, was hospitalized with a high fever and severe vomiting. Two weeks later, he was dead. “His skin started to come off,” recalls Alexander Gurov, a fellow parliamentarian and a friend of Shchekochikhin. Poisoning was suspected but never proved-Russian authorities sealed his medical records. 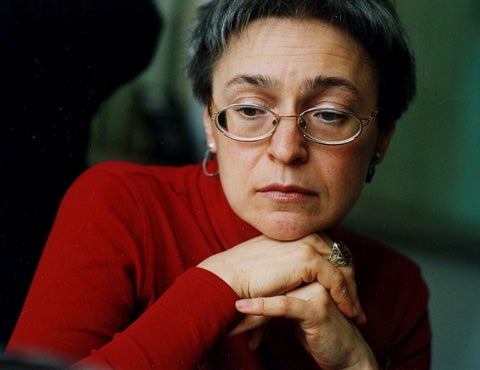 In September 2004, journalist** Anna Politkovskaya,** a fierce Putin critic (and acquaintance of Litvinenko), boarded a flight to Beslan, where she hoped to help persuade Chechen terrorists to release 1,200 hostages from a primary school. After drinking a cup of tea on the flight, she fell unconscious. She recovered, only to be shot to death in the elevator of her Moscow apartment building two years later. 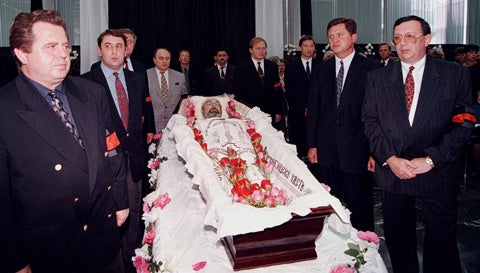