A Single Pedal for Braking and Acceleration, to Prevent Accidents

An invention that’s been around for two decades, but is only now getting any real attention, could change the way... 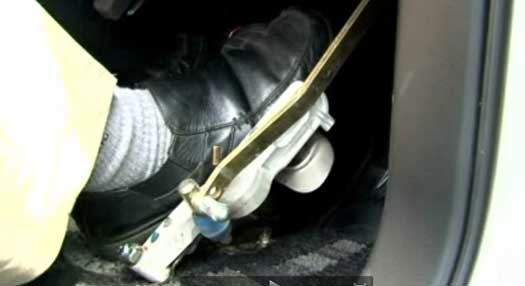 An invention that’s been around for two decades, but is only now getting any real attention, could change the way millions of people drive — if people ever have the good sense to adopt it, its inventor says. Japanese inventor Masuyuki Naruse claims that placing the braking and acceleration pedals in our cars side-by-side, just inches apart, is a dangerous design flaw. The solution: his Naruse pedal, a unified pedal design that puts accelerator and brake on the same foot-activated lever.

Naruse’s pedal places the accelerator control on the side of a larger brake pedal where the foot can nudge it to the right to increase acceleration. Downward pressure on the pedal results in only one singular action: stopping. This, Naruse says, will prevent the many thousands of accidents each year caused by drivers stomping on the wrong pedal, accelerating into peril when they are trying to brake.

In light of the recent spate of accelerator-related recalls, either because the accelerator gets stuck or gets hung up with the floor mat, has renewed some designers interest in Naruse’s designs and others like it. Swedish regulators are testing a single-pedal scheme, and in Japan the Naruse pedal has been declared street legal on about 130 individual cars. Considering a Japanese research group determined that some 6,700 accidents — including 37 deaths — were caused in Japan last year by drivers mistakenly slamming on the gas, the idea might be gaining traction.

The obvious obstacle between between Naruse’s idea and widespread adoption by automakers is the need for people the world over to have to relearn the muscle memory they’ve developed over a lifetime of two-pedal driving. That, and the clear detriment to Hollywood-style shift-and-stomp acceleration that gets all car lovers’ pulses pounding. But from engineering and safety standpoints, a single-pedal design actually makes a lot of sense. See Naruse’s pedal design in the NYT Business video below.