We test the muscle of the newest sports cars on the track. 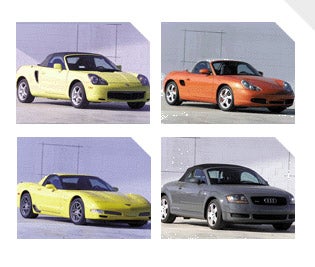 (Clockwise, from top left)
Agile, light, and well-balanced, the new MR2 is at home on tight corners and short straights With most power coming at high engine rpm, the Porsche Boxster S rewards precise driving. The four-wheel drive of the Audi TT proved balanced, but its weight limits cornering ability. Raw power, improved grip, and a well-balanced suspension put the Corvette Z06 in front.

Nearly devoid of grandstands, Willow Springs International Raceway, a windblown track in the high desert north of Los Angeles, is a long way from the crowds and spectacle of major motorsports. Built for the heyday of sports car racing in the 1950s, Willow has seen public enthusiasm for road racing come and go, then come back again, remaining something of a mecca for amateurs and professionals alike. When we arrived with four new sports cars at the leading edge of today’s roadster revival, there was a sense of coming home.

The cars tempted a sprint for the quickest open bucket seat, like how the 24-hour endurance race at LeMans used to start. The lure was a chance to drive Chevrolet’s Z06 Corvette, Porsche’s Boxster S, the Toyota MR2 Spyder, and the Audi TT Quattro, sports cars varying widely in size and price but sharing an unabashed purpose-fun behind the wheel.

Their personalities already were expressing themselves on the trip up to the track: The latest-generation Corvette, the Z06 coupe, attacked the mountain grades with more power, less weight, and stickier tires, an evolution of Corvette’s basic format-a thumping V8 engine driving the rear wheels-that hasn’t changed since the first eight-cylinder engine in 1955.

Porsche’s Boxster S has a larger (3.2-liter) engine, more power, bigger disc brakes borrowed from the 911 Carrera, and a sixth gear in its transmission.

Not as powerful, but not as expensive, Toyota’s mid-engine MR2 Spyder takes up pretty much where previous cars wearing that nameplate left off, putting Toyota back in the sports car business with a nearly irresistible price of $24,040-lowest by far in our group.

The Audi TT Quattro Roadster is a stylish two-seater that is unfashionably heavy and propelled by an engine with the least piston displacement. Still, the TT is arguably the most sophisticated engineering effort, with a turbocharged and intercooled engine and all-wheel drive.

Going in, the Corvette had the clear power edge. Chevrolet calls the Z06 the best-performing Corvette ever. The titanium exhaust system, thinner glass, and lighter tires save weight, though this brings some drawbacks. The center of gravity shifts slightly forward, which along with the long-for-a-sports-car (104.5-inch) wheelbase aggravates the problem of delivering 385 horsepower to ground through the rear tires. The trick is just the right amount of rpm before aggressively engaging the clutch. Get it right and the back of your head kisses the seatback as tires scratch the pavement for purchase and you blast by 60 mph in 4.7 seconds.

The others posed little threat to the Corvette’s raw acceleration, even though the Porsche and the Toyota are notably lighter. The Boxster came closest at 5.9 seconds.

Zero-to-60 runs rapidly separate the quick from the lame, but top-gear-passing statistics tell another revealing story. How could the speedy Corvette be topped by the half-its-price Toyota? Turns out that the six-speed-equipped Corvette uses extra-tall gearing to avoid being branded a gas-guzzler by the federal government. The five-speed-equipped Toyota is geared to maintain engine rpm at all times to fully exploit its modest power.

In the case of the Audi TT, the good and bad aspects of the turbocharger are readily apparent. The exhaust-driven turbo isn’t fully up to speed during 30- to 50-mph bursts, where this car’s acceleration is distinctly off pace. But by 50 mph, there’s sufficient exhaust-gas flow to help pressurize the engine’s intake manifold, so the engine hits stride and hustles the TT into the lead. All this makes for far different sensations when the throttle’s floored. Gear ratios in the Porsche and the Toyota keep their engines perpetually primed and ready, albeit at some noise and fuel-efficiency penalty. In the Audi and the Corvette,
you need to use the lower three gears for accelerating, the three taller ratios for quiet, high-mileage cruising.

Braking brought another surprise. Theoretically, the Audi and Corvette should be more difficult to stop because they’re the two heaviest cars and each carries more than half its weight on the front tires. (The shortest possible stopping distances are achieved when all four tires are equally loaded during braking.) Refuting this hypothesis, the Corvette had the best stopping-distance average at 124 feet from 60 mph, versus 127 feet for the Audi, 130 for the Porsche, and 138 feet for the Toyota. Corvette’s tires more than compensated for the aforementioned negative performance factors. For Z06 models, Corvette engineers sacrificed the run-flat radials fitted to all their cars since 1997, substituting Goodyear Eagle F1 tires, roughly 3/4-inch wider, approximately 6 pounds per tire lighter, and vastly superior in road holding.

So what do you do when you suffer a flat in a car that carries no spare? The engineering solution is a squeeze bottle of latex sealer and a miniature air compressor for reinflation. If these stopgaps fail, you use your cellphone to summon a flatbed.

Such inconveniences as flat tires pale when you pitch one of these sports cars into a corner, where the grip, balance, agility, and predictability of a highly polished design comes into its own. In the slalom, Toyota’s MR2, the lightest and smallest car of the group, is by far the best balanced, flicking through the cones with a butterfly’s grace. The Porsche Boxster’s moves are more deliberate, because of slower and less sensitive steering.

The heavies brought up the rear. The Audi TT’s sluggish throttle response makes fine-tuning the cornering line difficult. The Corvette has a cranky attitude when asked to weave through the 600-foot line of tightly spaced cones. Pushed to the hairy edge of rubber-to-road adhesion, the Corvette lost its grip abruptly and unpredictably. Best results were achieved by smoothly and conservatively steering it through the course.

To put all this together-acceleration, braking, and handling-we mapped out an 0.8-mile circuit at the Streets of Willow, an adjacent track that gamboled around second-gear hairpins, swept through third-gear bends, and dashed down short straightaways with a few abrupt elevation changes thrown in for good measure.

The Corvette’s broad-range torque and mighty grip were unmatched by the challengers. Despite our attempt to counteract the Corvette’s power-to-weight-ratio advantage with a rigorously tight course, the Z06 easily managed to flash its oversize taillamps to the other sports cars with a 56.2-mph average speed and an impressive demonstration of vehicle dynamics reminiscent of a Nascar stock car hammering a road course into submission.

The Boxster demanded an astute driver to keep the tachometer needle toward the high side of the dial-between 4,500 and 7,200 rpm-where most of the power is stashed; doing so was frustrated by gear splits out of synch with this particular course.

The Audi TT’s Quattro driveline was especially handy on the racetrack. This car could be flung aggressively into a bend without fear of a heavy tail drifting wide. Likewise, the TT tolerated early, aggressive throttle applications exiting a turn.

The Toyota MR2 Spyder used its lightness to advantage. Despite its overall responsiveness, track speed was diminished by the tendency to pirouette while late braking into turns and futile wheelspin in response to the driver’s call for maximum acceleration while exiting bends.

Toyota’s MR2 is the classic Sunday afternoon roustabout. You can flip the top open at a stoplight, map a route to the nearest twisting mountain road, and keep your smile even if that destination is never reached. All interior surfaces come from injection-molding machines, but an interesting selection of weaves, perforations, and textures keep your thoughts from drifting in the cheapskate direction. Low seats, high sides, and a wind blocker keep your hair from twisting in knots. Every nook and interior cranny is fitted with a mini storage compartment. But this is small compensation for a trunk that’s barely large enough for a duffel bag. This car is ideal for weekends but impractical for everyday driving.

The midengine configuration creates a usable trunk both front and rear for the Boxster, but the interior still
is purposeful and close fitting. The Porsche constantly challenges its driver to pay attention, to polish his or her technique, and to savor the glories of a pedigreed sports car. There are idiosyncrasies-such as a left-mounted ignition switch, an engine likely to stumble if the clutch is engaged without a healthy nudge of the throttle, and vague-feeling shift linkage-but a well-driven Boxster S delivers a heady dose of driving dynamics in its purest form. In fact, the intoxicating six-cylinder serenade issued by this Porsche’s power source has been known
to convince even hidebound skeptics that $57,452 is an entirely reasonable price to pay for a sports car.

We’ve previously called the Audi TT a rolling fashion statement and while that’s still true, this soft-top Quattro edition goes far beyond flash and filigree. The baseball-glove seat motif is as comfy as it is clever and attractive. The power top works swiftly and proficiently. In contrast to the hard-core sports cars in this group, the TT takes a softer tack. It rides smoothly and quietly and never bombards you with noise. Its listless metabolism turned in this group’s lowest fun-to-drive quotient, but it’s near the top of the list of sports cars we enjoy being seen in.
That leaves the Corvette, which prompts twinges of love-hate frustration. Bummers include the resolutely fixed roof, a homely hind end, a turn-circle in the pickup-truck class (42.3 feet!), clumsy shift linkage, and an interior mood out of synch with the near-$50,000 price. But the Z06 buries those faults with a long list of winning traits. The engine is the absolute apogee of pushrod performance, there’s nearly enough road holding to induce nosebleeds, and the Corvette’s built-in electronic stability systems let even rank amateurs enjoy aggressive driving without risking their hide. When the hard charging begins, this is the ride we’d run toward every time.