Drug lords, millionaire wannabes and the North Korean government have perfected methods for knocking off our most valuable greenback. Now the scientists in charge of making the real dough are fighting back with an unfakeable (for now) $100 bill

Cop Vs. Con Artist: We asked Wayne Victor Dennis, who was once jailed for printing $15 million in fake currency, to point out security flaws in today's $100 bill. Larry Felix, director of the U.S. Bureau of Engraving and Printing, gives us an inside look at the tech that will make the next $100 inimitable. Joseph Sohm/Corbis; Illustration: Trevor Johnston
SHARE

Every single American bank note is printed at Bureau of Engraving and Printing facilities, with ink and on paper each made, separately, in only one factory in the world. And yet at any given time, there is at least $70 million worth of fake U.S. currency floating around, 75 percent of which is in $100 bills. In large part because of the advent of inexpensive scanners and printers, more and more fake bills are entering circulation: From 1997 to 2007, the amount of passed counterfeit bills nearly doubled, to $64.9 million. Professional fakers are making bills that are more convincing than ever.

Blame the digital revolution. “In the early 1990s, only 1 percent of all counterfeit currency was created with high-quality printers, scanners and copiers,” says Michael Merritt, a deputy assistant director for the Secret Service, which is charged with policing counterfeit currency. “Now it’s 56 percent.” One notable offender is Art Williams, Jr., who has been arrested twice in the past decade–and has seven years left on his October 2007 sentence–for printing roughly $10 million in ersatz American currency using a scanner and a high-end printer.

The Secret Service estimates that 75 percent of the $564 billion in U.S. $100 bills are circulating overseas. Because of its high profile and constant, known value, the American hundred has become, in many unstable economies, the de facto currency. But tracking down fakes all over the world is too difficult for one agency. And there are far more sinister counterfeiters and opportunists than millionaire wannabes like Williams. For at least the past two decades, North Korea has been using the same sophisticated money-printing processes as the U.S. to create a “superdollar”–a bill that matches nearly every one of its security features–in order to simultaneously fatten that country’s coffers and devalue the American dollar. (According to the Secret Service, $5.3 million in supernotes were passed in 2005, all as $100 bills.)

So although most of the American financial brain trust is logging extensive server hours to digitize your dough, the BEP is working to protect the hard copies with a combination of tried-and-true tricks and the latest in anti-counterfeiting tech. Once the new bill hits ATMs in the next few years, even the most tech-savvy counterfeiters will be forced to start from square one.

Launch the gallery, to see how a former counterfeiter and director of the U.S. Bureau of Engraving give an inside look at the flaws in the current bill and the tech that will make the next $100 inimitable.

Cop Vs. Con Artist: We asked Wayne Victor Dennis, who was once jailed for printing $15 million in fake currency, to point out security flaws in today’s $100 bill. Larry Felix, director of the U.S. Bureau of Engraving and Printing, gives us an inside look at the tech that will make the next $100 inimitable. 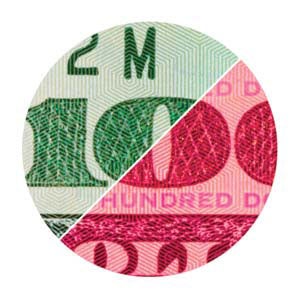 Today’s Vulnerability: Counterfeiters can fake the current green-to-black color-shifting ink with a trip to the craft store. “You just put glitter in a blender, grind it into a fine dust, and then mix it into clear varnish and print it onto your bill,” Dennis says. To the untrained eye, the ink appears to change color. Next-Gen Protection: The new bill will probably feature images or patterns printed with metameric ink–chemicals that change color depending on the wavelength, not angle, of the light shining on them. Metameric inks that are invisible in daylight may show up under the glow of a lightbulb or LED. Felix can’t confirm it, but the new bill might also include holographic images like those on the British 20-pound note. Because they’re made with lasers, holograms are difficult to replicate with home equipment. 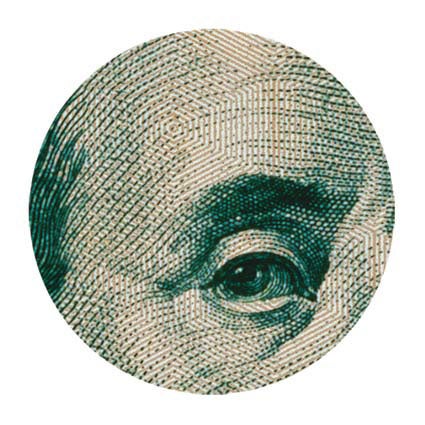 Today’s Vulnerability: Counterfeiters used to have to re-create the BEP’s printing plates to make cash. Now high-quality printers and scanners produce the same results. “You can fix imperfections with Photoshop,” Dennis says, “and cut and paste serial numbers.” Next-Gen Protection: The new bill’s design will have proprietary images that scanners and editing software will recognize during counterfeiting and halt the process. It will also use multilayered intaglio patterns–the intricate swirls that make up Benjamin Franklin’s face–too finely detailed to be reproduced by any digital printer on the market. 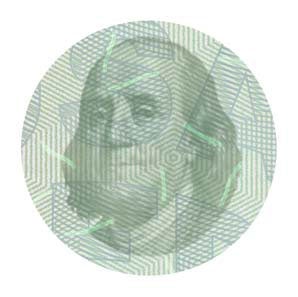 Today’s Vulnerability: Instead of making currency-grade paper, counterfeiters take advantage of the fact that watermarks and security threads are in the same place on the current $5 and $100 bills, Dennis says. So cons just remove ink from fives and use them to print hundreds. Next-Gen Protection: The new $100 bill will probably follow after the new $5, which features a dramatically larger, more detailed watermark in a unique location. Felix can’t yet confirm it, citing security concerns, but the paper pulp may include small threads, such as optical fibers, that will glow when illuminated with an ultraviolet light. 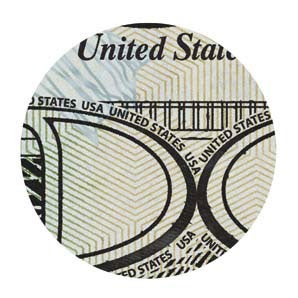 Today’s Vulnerability: Microprinting–type so tiny it can’t be clearly visualized by most scanners and copiers–is one of the oldest anti-counterfeiting tricks, but determined fakers have found ways to duplicate it. “I could exactly reproduce microprinting with a Rapidograph pen that made a line thinner than a human hair,” Dennis says. Next-Gen Protection: The microprinting on the new bill will be scattered over areas containing the other copy-proof features, such as watermarks and intaglio-printed designs. This will make life more difficult for counterfeiters, who typically can’t duplicate integrated security attributes. “This is one of the key strategies of our new design,” Felix says. 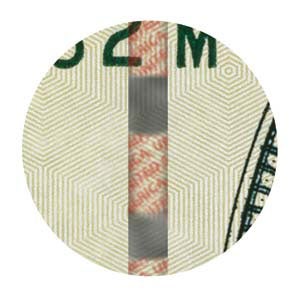 Today’s Vulnerability: The current $100 bill, introduced in 1996, has a security thread embedded in the paper bearing the words “USA 100” in Lilliputian font. But counterfeiters have since figured out how to mimic this effect. “You print the tiny letters on clear paper to make a thread, and put the thread between sheets of rice paper,” Dennis says. This method produces bills that look and feel like the real thing. Next-Gen Protection: The security thread planned for the next-generation $100 bill will feature 650,000 tiny glass domes, called microlenses, crammed into a strip a few millimeters wide on the bill’s surface. When light strikes this optical strip, the microprint within it will appear to slide over the surface of the thread as the bill is turned–an illusion that is nearly impossible to replicate.
Security