How to Clip the Apex Like a Real Pro

If you don't know how to handle a high-performance car, the local highway isn't the place to learn. Get thee to a car club. 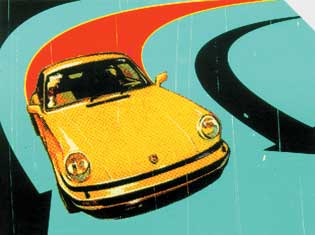 Somewhere out there is a kid in a red BMW 325 with a ski
rack who thinks he spanked my well-modified ’83 Porsche 911 the other day. He came up on my rear bumper on Route 9W looking for a fight, blew past at 65 mph, and wailed away at what I guess to be about 90 mph. He’s probably wondering why a poseur has a roll bar and speed-equipment stickers on his rear quarter window yet drives like he votes in St. Petersburg.

As I watched him disappear in the distance, I thought to myself, Have a nice day, 2Fast 2Stupid, I’m going to the track tomorrow.

No, I’ll never be a racer; I’m way too inept to ever bang fenders at Watkins Glen. But every couple of months, I rent the racetrack at Lime Rock or Pocono and go play. My daughter often comes along, and we take turns driving the little yellow coupe. We do this for about $100 a day.

I’ll explain the how in a moment, but here’s the why. Our car culture tells us to buy machines that are fast enough to get any ordinary driver into a world of hurt in about six seconds. No doubt, as I write this another expensive crew is shooting another
TV ad showing a sports sedan carving
corners, tach at the redline, along a magically traffic-free road. Never mind the silly, small-print caveats in those ads (closed course, professional driver, don’t try this at home), the message
is clear: Buy a high-performance automobile and drive it as if you knew how. Yet aside from the tiny minority of drivers who attend performance-
driving schools, we don’t know how.

Performance-driving schools cost thousands. Here’s how I get my Porsche onto a racetrack for a hundred bucks: About 150 other drivers and I rent said track under the auspices of the Porsche Club of America, and the
C-note–the cost varies a bit depending upon the track and the sponsoring PCA region–is the fee to participate in a driver-education day. This basically consists of screaming around the track as fast as you’re able to, with a club instructor–usually a serious amateur racer–in the right-hand seat. It isn’t racing, but it can push you to the limit of your driving skills in a much safer, smarter way than tearing up 9W.

One of the best-kept secrets of enthusiast driving is that a number of marque clubs do much the same thing as Porsche’s, and many of them welcome a variety of other models. The events are low-key and noncompetitive, and nobody worries about whether you are a speed bump or a budding Schumacher. Cars are allowed to pass only on selected straights and only after the slower
driver has signaled. It’s probably safer than the drive to the track. The only requirements: a willingness to learn, have a good time, and wear a helmet.

At 07:00 on a ceiling-zero foggy June morning in Watkins Glen, New York, I find my way from the woodsy Seneca Lodge to the track and, as always, am humbled by the variety of Porsches present. My ’83 is an antique among Twin Turbos, full-race Cup cars, GT2s and specials that arrived in enclosed trailers. Never mind. I also see Boxsters with friction-tape numbers on their doors, older guys
in brand-new water-pumper 996s who’ve never come close to 90, and a harried woman who can’t find the tech-inspection line for her Targa.

Instructor Jim Lewis jumps in and says, “We’re gonna have fun today!” His enthusiasm is calming, and as our queue of M&Mâ€colored cars snakes out onto the track, Lewis gives me the rundown. Cars are divided into four or five groups depending on the driver’s experience. The higher categories can circulate without instructors. I, of course, am in the St. Petersburg class.

Line is obvious: It’s the one best way through a corner, cutting an arc from turn-in (the first turn of the wheel) to apex (the point at which you clip the inside edge of the track) to track-out (the point at which the car comes
closest to the outermost edge of the track) so that you don’t lose any more speed than necessary and come out of the corner as fast as possible. Fast out is way better than fast in. “Apex late is great,” racers say, because then you’re pointed pretty much toward whatever straight follows. Apex early and you’ll be scrubbing around the next two-thirds of the turn losing speed. “Clipping the apex” isn’t that hard, even for novices, but if you then proceed to overshoot the outer edge of the track by a few inches, you’ve got a wheel off and are into a lesson in deep trouble–most typically a correction and counter-
correction that usually leads to a spin.

Smoothness is a skill that entirely escapes go-for-it street racers and is hard for novice closed-course road racers to achieve as well. Smoothness means maintaining the chassis’s balance. Whenever you hit the brakes, stab the throttle, or turn the steering wheel, the car pitches, yaws, or rolls around its center of gravity. Brake hard and the car bobs forward, putting lots of weight on the front tires but lightening the rears–which may then begin to slide sideways and spin. Whack the gas to the floor coming out of a corner and the reverse happens, lightening the front wheels and making it harder for them to steer. Jerk the steering wheel and the car throws its weight to one side or the other, which doesn’t help directional control either.

So brake firmly but progressively, and in a straight line, not while turning. Don’t jump on the gas; rather, squeeze it like a trigger. And steer smoothly, not making macho corrections and countersteers to look cool.

Vision is another tricky one. Most of us stare at the inside curb of the corner we’re going through, concentrating on the apex. When we clip it, we look up and start thinking about the next one. Bad idea. When you’re into a corner and have established your arc to the apex, look for the track-out point. As soon as you know where track-out is, look for the next corner. A car will tend to go where you’re looking; there’s feedback between eyeballs and hands.

As for focus, even the pros sometimes let their minds wander in a car going fast, and that is not good. “I’ve done it myself,” Lewis says. “You start thinking, Oh, man, I nailed that corner, I’m an ace, I’m so cool, and before you know it, you’re into the next turn too fast or off line.” Only a racer knows how hard it is to stay focused, and only a couch-bound idiot would ask Nascar drivers how hard it is to turn left.

As I said, this isn’t racing. But it is a smart way to push your machine, if not to its limits at least to yours. Of course, enthusiast clubs aren’t going to let you on the track with Mom’s Crown Vic. But if you drive a car with sporting pretensions–even a red BMW with a ski rack–you can probably find a group that’ll let you aboard.