Carbon Nanotubes Usher Molecules In And Out Of Cell Membranes

Success in the long-sought effort to make artificial pores 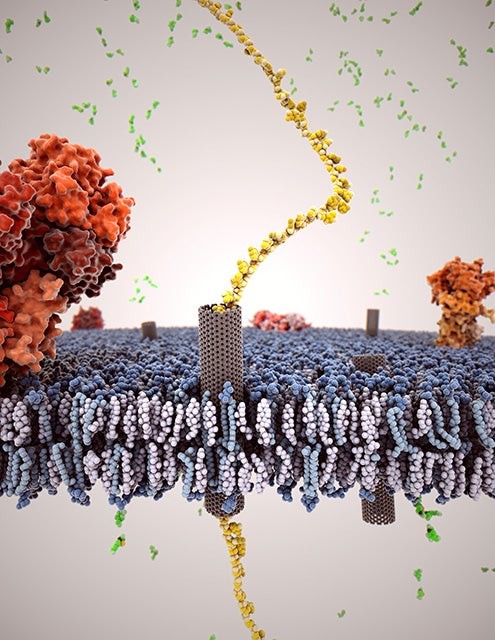 The membrane is a really important part of a cell—it keeps the organelles and useful chemicals in, and other things out. But the membrane also needs to be selectively permeable, letting in the right molecules (like DNA or water) when they approach the cell. Though scientists have been able to make synthetic membranes, used in manufacturing pharmaceuticals and to treat water, they haven’t been able to make them permeable as in the natural world. But according to a paper published in Nature, a team of international researchers has now been able to make both artificial and natural membranes permeable by inserting carbon nanotubes that work like little tunnels.

The researchers found that, if they coated the tubes with lipids, they slid right through the cell membrane, puncturing it without destroying it. Most impressively, the tube insert doesn’t appear to leak around the edges. By giving the nanotubes a slight charge, the researchers found that they could selectively transport certain molecules, just like channels in natural membranes do.

The researchers are excited about potential applications for the newly porous membranes, which haven’t been fully explored. They might look into biological applications, such as artificial lungs or kidneys, though the channels may have to become a bit more selective before that is possible, as well as improvements to artificial membranes.