A face only a robot mother could love 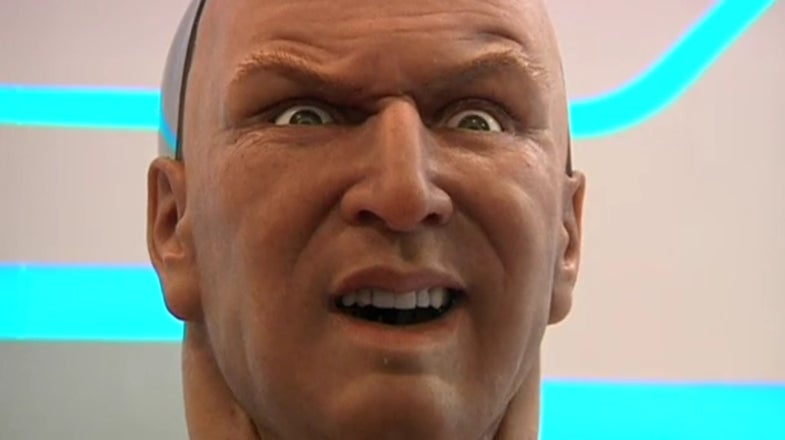 Humanoid robots like Star Trek‘s data have long been the stuff of science-fiction, but if Hanson Robotics’s latest foray into a person-like artificial being is any indication, that day may be…well, still pretty far off.

‘Han,’ as the robot is dubbed, features 40 motors that allow its face to demonstrate a range of emotions and facial expressions: everything from smiling and flirting to crossing its eyes or acting drunk. Cameras in the robot’s eyes and chest allow it to determine the age and gender of the person it’s talking to, and it features the ability to carry out limited conversations too.

Hanson Robotics says it’s targeting applications such as working behind the desk at a hotel or interacting with the elderly. But just looking at the robot, I think the company might want to invest a little more time. To me, Han seems to rest squarely in the Uncanny Valley, the point at which people are put off by something that is purporting to be human but clearly isn’t.

Part of that is Han’s layer of skin, made out of a substance called ‘Frubber’—short for ‘Flesh Rubber’—which looks remarkably lifelike enough that it veers into the creepy. But its conversational skills also seem more stilted than something like Siri or Amazon’s Alexa, answering some statements with vague non-sequiturs. And I’m not quite sure that flirting or acting drunk is going to be of particular use in either the health care or customer service fields. (Like we don’t all have enough frustration dealing with customer service chatbots as it is.)

Han, however, isn’t the version that Hanson is aiming to commercialize. It’ll instead use the face-expression technology from Han in a female robotic face named ‘Eva.’ Hopefully that one will be a little less off-putting, so that we don’t end up with a mass of terrified hotel customers.