Who Should Buy Boston Dynamics From Google? 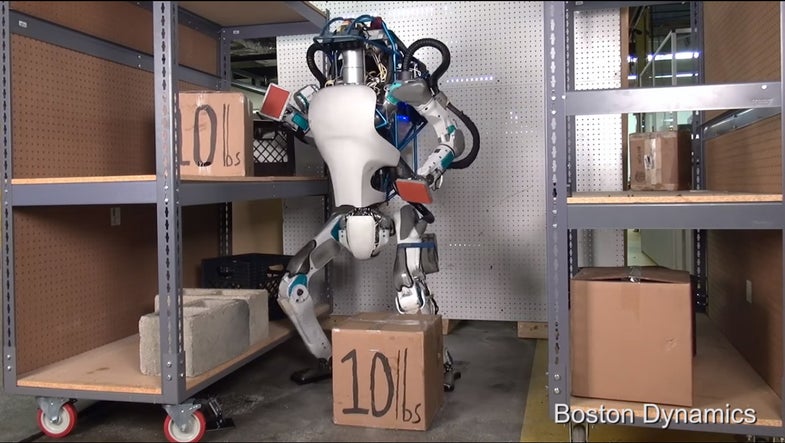 Who will fill Google’s empty, robo-panicking shoes? With the news that the technology giant is moving to sell Boston Dynamics, makers of animal- (and human!) inspired military robots, the questions naturally turned to possible buyers. Here’s a quick run-down of some contenders who might be willing to fund Atlas, BigDog, and the noisy LS3 robot mule.

The online retail giant made headlines in 2013 by announcing work on a delivery drone, and much to the surprise of skeptics, it’s continued to develop that program, moving from basic quadcopters to copter/plane hybrid models. Amazon has more robotics initiatives than just drones, mainly related to its massive warehouse and physical goods storage operations. While military pack mules might not make sense, Amazon has a lot of warehouses, and Atlas can lift packages.

Technically, Toyota’s been in the military machine business for a long time, with its popular, rugged, and affordable Hi-Lux line of trucks appearing in almost every irregular conflict of the last thirty years, usually with some giant gun mounted in the back. If they buy Boston Dynamics, it won’t be so that can make rugged, affordable, gun-toting robot dogs. No, this will be part of Toyota’s growing robotics initiatives.

Last fall, Toyota announced it was investing $1 billion into robotics in Silicon Valley, under the tutelage of a former DARPA program manager. Toyota’s quietly been in the robotics business since the 1970s, designing robots for everything from manufacturing to personal assistance. If Boston Dynamics ends up at Toyota, expect to see more quadruped personal helpers, and more humanoid factory machines.

Elon Musk, the Silicon Valley billionaire behind SpaceX and Tesla Motors, hasn’t expressed any strong interest in robotics — at least outside of the robots used to help assemble Tesla’s electric cars. In fact, he’s deeply skeptical of artificial intelligence, though he probably shouldn’t be. Musk has the money to do it, but I don’t think he has the interest or desire. Still, his name shows up on lists like this a lot.

These are the big defense giants, who would probably be happy to sell the military all the noisy, pricey, smart robots they can get. The problem is that right now, the military isn’t buying anything they haven’t already budgeted, and convincing the Pentagon that what America really needs is loud mechanical pack mules is a hard sell even when the cash if flowing freely. If the budget situation changes, I could see one of the giants reaching out to pluck up little Boston Dynamics, but not until then.

It’s not sexy, but robotics are often more of a long-term investment than an immediate turnaround business. Roomba makers iRobot for years also had a defense wing, which made robots for bomb squads, but they recently divested themselves from that business. That company is now owned by Arlington Capital Partners, who will likely keep it going until a more attractive buyer comes along. An arrangement like that could work out fine for Boston Dynamics, which would get to keep developing its robots in the meantime.

Boston Dynamics has other options, is what I’m saying. The safe bet is that either Amazon or Toyota will pick up the newly orphaned robot makers. Until then, here’s hoping the droids find the buyer they’re looking for.