Scientists accidentally discover a new way to isolate gold that is much safer than existing processes, which use toxic cyanide. 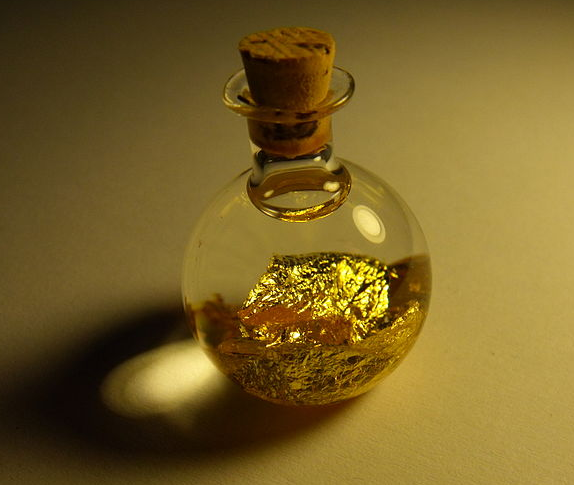 Gold, precious forever but especially lately, is a tricky metal. Bound up in consumer electronics, jewelry and the ores that it comes from, gold is difficult to extract, and most modern processes do it with a highly toxic combination of cyanide salts. The cyanide leaches the gold out, but the cyanide can seep into the ground, causing environmental problems and posing threats to human health.

Researchers at Northwestern University recently stumbled upon a solution that uses cornstarch instead. It involves some complex chemistry, but it’s cheap, biologically friendly and nasty-ingredient-free.

Led by Sir Fraser Stoddart, a chemistry professor at Northwestern, the team discovered this method by accident when looking for something else. A postdoc named Zhichang Liu was trying to make three-dimensional cubes out of gold and starch, aiming to use them as storage containers for gases and small molecules. But a liquid mixture of dissolved gold-bromide salts and a starch-derived sugar didn’t form cubes, it formed needles. This was strange, so the team decided to try to replicate it and tested different forms of sugars.

Alpha-cyclodextrin, a cyclic starch fragment with six glucose molecules, is the best way to isolate gold, they found. “Zhichang stumbled on a piece of magic for isolating gold from anything in a green way,” Stoddart says in a statement. The spontaneous bundle of needles is made of thousands of nanowires, each 1.3 nanometers in diameter, which contain a charged gold atom inside four bromine atoms.

The interaction between the starch fragment and the gold allows the precious metal to be selectively recovered from other materials, including platinum, palladium and others. The researchers already developed a process to isolate gold from scraps, and they hope this will lead to an environmentally friendly, cheap way to recover gold from anything. The research is published in Nature Communications.