A Life-Size LEGO Car You Can Actually Drive 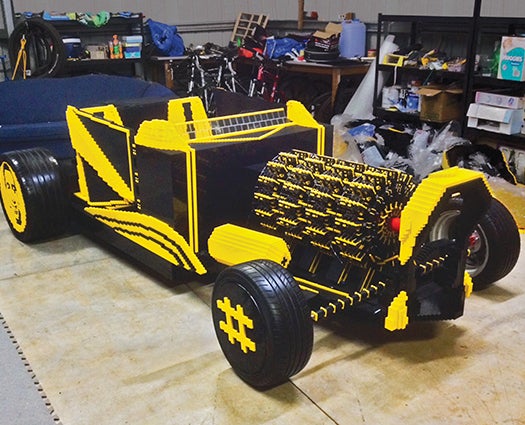 A total of 256 pneumatic LEGO Technic pistons drive four radial engines, which turn the driveshaft and power the oversize rear tires. The car can reach 18 mph—but there are no brakes.

The Super Awesome Micro Project, a full-size car made of 500,000 LEGOs, sprung from an unlikely partnership between Romanian tinkerer Raul Oaida and Australian investor Steve Sammartino. The two met over Skype in 2012, and since then, Sammartino has helped Oaida raise money for his ambitious projects, including a jet-powered bicycle. After they saw a video of a Ferrari 599 GTB made of LEGOs, they set out to build something grander. “If you’re going to make a LEGO car,” Sammartino says, “you might as well make it a hot rod.” Oaida spent 18 months constructing the compressed-air-powered vehicle and then shipped it to Australia for a test drive. The throttle and steering wheel snapped off, and a few high-pressure air hoses blew, scattering LEGOs everywhere. Oaida’s quick fixes got it running again, but Sammartino thinks the seats still need work. “It might be the most uncomfortable car in automotive history,” he says.