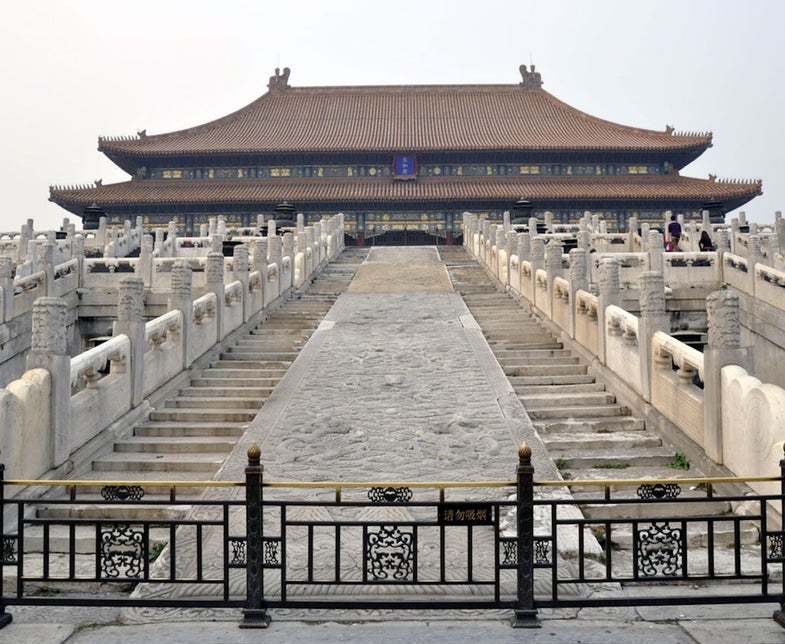 Records say that in 15th-century China, workers hauled 100-ton-plus stone blocks 43 miles from a quarry to build the Forbidden City, over man-made paths.

The workers dug wells every half-kilometer to reach water, which they would pour to create ice roads in the deep winter. Then they hauled the stones themselves. Now, six hundred years later, a new study sheds light on exactly how that would have worked.

Engineers from two Beijing universities and Princeton University in the U.S. got to wondering about the details of this operation. The modern-day engineering team did the math, calculating how much friction different hauling methods—including log rollers, a popular ancient transportation method—created. Their numbers show sliding over ice was a good choice, the researchers say, and that workers likely poured water in front of their sledges as extra lubrication.

The team calculated that recorded winter temperatures in Beijing for that era were cold enough to maintain ice roads. In fact, it was so cold that friction alone wouldn’t create a good lubricating layer of water between the bottoms of the wooden sledges and the surface of the ice roads. However, it was just warm enough that water poured onto the road would stay liquid for a few minutes.

Wheeled vehicles of the time wouldn’t have been able to carry anything heavier than 95 tons, the researchers calculated.

Pulling sledges over water-lubed ice could also be more efficient than rolling them over logs. The coefficient of friction for logs rolling along the ground is 0.2 to 0.4. With rails, that drops to 0.02 to 0.04. Water-and-ice sliding has a coefficient of friction of about 0.02. Overall, if you’ve got the weather for it, sliding sledges may be easier than dealing with logs because it’s easier to make a smooth ice road than a smooth wood-planked one, the researchers wrote. It’s also easier to turn a load on ice than it is to maneuver it on log rollers.

So why not put all this stuff in a big wheeled cart and get some mules to pull them? Wheeled vehicles of the time wouldn’t be able to carry anything heavier than 95 tons, the researchers calculated. Plus, ice roads and men were more reliable than mule carts, and the Forbidden City’s architects worried about keeping their biggest stones safe, the researchers wrote. Wonder if the peasants pulling the stones felt the same way.

The research team published its work today in the Proceedings of the National Academy of Sciences.