Chew This: What Does Science Tell Us About Teething?

“Why wasn’t some more humane and less grisly teething process naturally selected for our species a few million years ago?”... 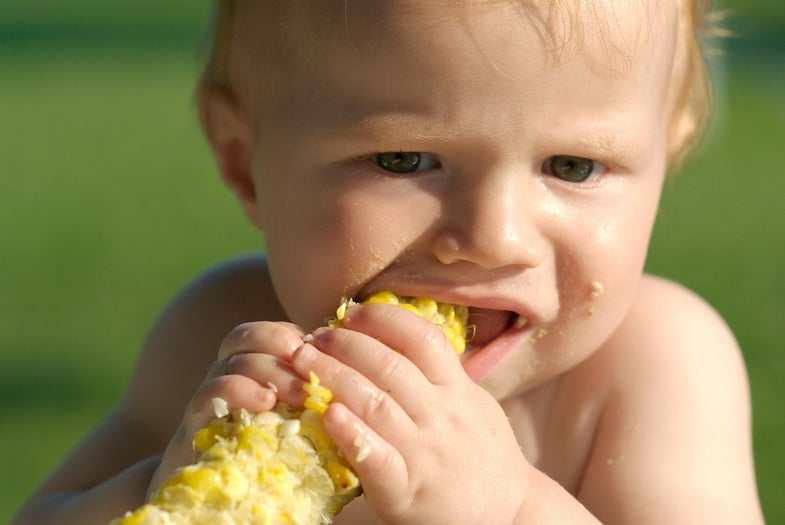 “Why wasn’t some more humane and less grisly teething process naturally selected for our species a few million years ago?” a friend asked on an email list recently.

And he had a point: teething, from what I’ve heard, is the pits. Babies start cutting their first teeth around 6 months, and gain one after another – which can come with painful swelling, fever, night wakings, and feeding disruptions – until 20 teeth are in place when they’re 2. My little guy is just starting the drooling, gnawing process.

But what if teeth are a scapegoat for a lot of other things going on? What if they’re not actually all that bad?

Dr. Clay Jones, a Pediatric Hospitalist at Newton-Wellesley Hospital in Newton, MA, says that the old adage that the only thing teething produces is teeth is backed up well by science. “Any systemic symptom — fever, diarrhea, refusal to feed, poor sleep, irritability — just doesn’t have evidence to support that teething causes,” he told KinderLab. “At the most, teething probably produces mild discomfort.”

In general, teeth take an eight-day journey as they emerge from the gums. Two studies on the topic failed to find any cluster of symptoms that could predict when a tooth was about to poke through – though the authors did note that there was an association between some mild symptoms and the week-long teething adventure. Still, without symptoms predicting a tooth, what’s the complaining about?

“When older patients come in – 6-year-olds or 12-year-olds who are getting their molars, they describe some mild discomfort,” says Dr. Grant Ritchey, a dentist in Kansas. “Physiologically, it’s much the same process because those teeth aren’t replacing baby teeth.” Ritchey says that mysteries abound in the mouth — the actual impetus that makes teeth start their upward journey is still not understood.

Jones, who blogs at Science-Based Medicine, says that when doctors tell parents what something is supposed to feel like, it becomes a self-fulfilling prophecy. “The age of 6 months to 2 years, that’s a time in a child’s life when they’re getting colds very frequently. From diaper rash to gastro-intestinal illnesses, it’s very easy to attribute any symptom to teething.”

So what can be learned from teething in the animal world? After all, puppies lose teeth and swallow them without a peep. Are human babies so much more sensitive?

Lynn Fairbanks, director of the Center for Primate Neuroethology at UCLA, has worked with a colony of vervet monkeys living in social groups in large outdoor corrals for many years. She says she and her colleagues observed mothers nursing their infants, but never noticed any particular teething behaviors, like chewing or fussiness when the first incisors were coming in. “Infants will cry when they are separated from the mother and they will get upset when the mother is trying to wean them from nursing, but we didn’t notice the crankiness associated with teething in human infants,” says Fairbanks.

A 1945 study looked at baby teeth in chimps, and suggests that baby chimps did fuss and have discomfort associated with getting their teeth.

As Jones writes, historically the treatments for teething babies were worse than the pain of teething. Doctors used to split gums to clear a path for teeth’s emergence, give kids mercury-based medicine, or use opiates and honey to soothe fussiness. Today, the efficacy of homeopathic remedies and even pain relievers isn’t backed up by evidence. Sorry, parents — TLC and something to chew on may be the best medicine.