Is It Possible To Escape From Everyday Surveillance?

And not hide in the woods? 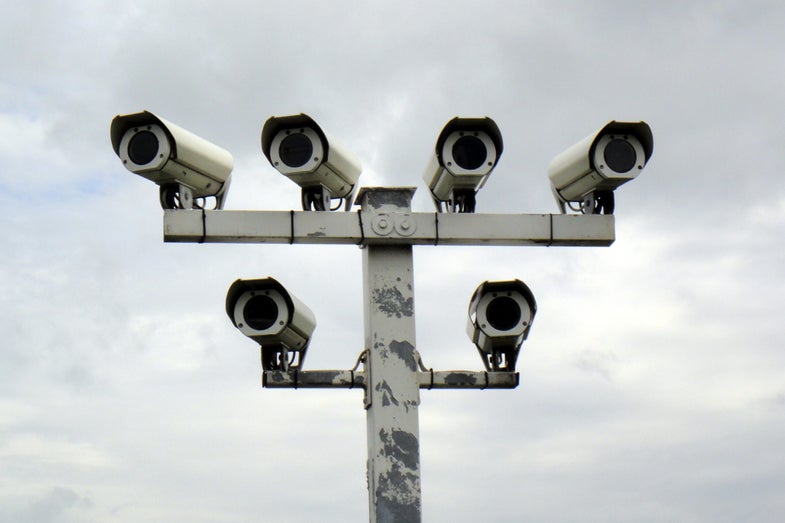 Is it possible to escape from everyday surveillance? Writing for New York Magazine and inspired by Edward Snowden’s leak of the NSA PRISM program, Kevin Roose spent a day trying to answer that question. As an added challenge, he chose not to flee into the wilderness, but instead to stay in San Francisco, using all the technology he’d normally use. To accomplish this, Roose used even more technology.

In three parts, Roose documents his preparation for, experience of, and reflections on a day spent trying actively to avoid surveillance.

Preparation
The fascinating part of Roose’s preparation for a day without surveillance was just how much extra technology he needed to keep his regular gadgets from being snooped.

On their advice, I download Wickr, an app that allows you to send and receive encrypted texts and photos that self-destruct after minutes or hours of viewing. (It’s basically Snapchat on steroids.) I also sign up for a site called HideMyAss. It’s a private VPN service that is popular with the anti-surveillance crowd, since it allows you to camouflage your web activity by sending it through a network of thousands of proxy servers scattered around the world. I’m in the Bay Area, but with HideMyAss, I can make it look like I’m logging on from Brazil or Bangladesh.

Experience
Recounting his experience of a day spent in the city, Roose highlights one of the more perplexing facts of modern surveillance: the ubiquity of smartphones makes avoiding cameras basically impossible.

But my biggest problem, I quickly realize, isn’t what’s happening on my laptop screen. It’s what’s all around me at the café — customers using their laptops, phones, and tablets. All of these devices double as video and still cameras, and each of them could be used to spy on me. My expert guides warned me that the biggest threat to my privacy today would be the inadvertent snooping of my fellow citizens. Given the ubiquity of smartphones and other location-aware gadgets, and the ability of the NSA to cull and parse the data that comes out of those devices, we’ve become our own distributed network of unwitting spies, one whose collective reach is nearly infinite.

Reflection
Finally, reflecting on a day spent hiding, Roose get at the crux of the issue: actively hiding information is liable to draw more attention from the likes of the NSA.

I feel more anonymous than I did yesterday. But it’s also entirely possible that all the steps I took to disappear from the government’s eye — all the Wickr texts, anonymous Tor browsing, and Bitcoin payments — actually made me more visible.

This is the catch-22 of the modern surveillance state — try to leave it and you just end up closer to its center. We now know, thanks to another document leaked by Edward Snowden, that the NSA has been running a top-secret program called XKeyscore, which allows the agency to mine gigantic databases of e-mails, browser histories, and other personal data. Two of the things that might tip an agent off to suspicious activity, according to the XKeyscore presentation, are “someone who is using encryption” and “someone searching the web for suspicious stuff.” In other words, me.

There are two big takeaways from the day Roose spent hiding from cameras and cookies online. The first one is bad news for private citizens: So much data is collected all the time, it’s almost impossible to avoid providing some tracking information.

The second lesson is a problem for government: a tremendous amount of data is collected, and hardly any of it is useful. Clever contractors and data-mining algorithms can sort through some of it. The NSA cannot, however, catch everything. A person who disguises what he or she is doing, not through encryption and camera-blocking, but by just behaving normally, can use the obscurity of being dull as a new kind of secrecy.