Your mobile phone could soon be a mobile spy. 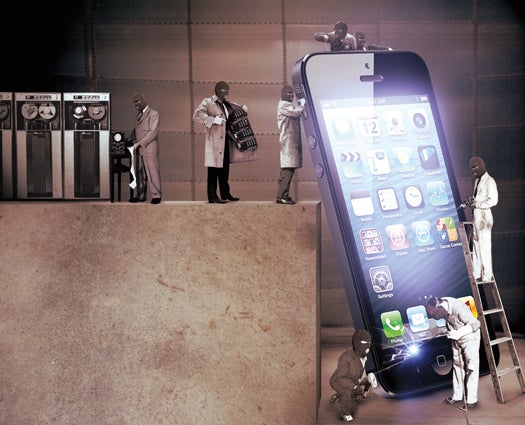 In 2009, the annual Pwn2Own cybersecurity competition provided hackers with a shot at cracking smartphones. They failed. In September, the event offered phones as targets again. This time, contestants seized control of them, successfully exploiting vulnerabilities in the two most popular operating systems, iOS and Android.

For the most part, smartphones have escaped the viruses and botnets that have plagued
desktop computers for decades. That luck may not hold out in 2013. The learning curves of cybersecurity professionals and cybercriminals track pretty closely. If the good guys have
hacked iOS and Android, the bad guys will quickly follow.

The first mobile malware attempted familiar invasions, stealing contact information and pictures from devices. But cybersecurity professionals expect a range of unconventional hacks as well. In the last couple of years, researchers have found ways to turn smartphones, with their cameras, GPS, and accelerometers, into portable spies.

Researchers from Indiana University and the Naval Surface Warfare Center, for example, created PlaceRaider, which enables a smartphone camera to surreptitiously take photos. The proof-of-concept program then stitches them into a 3-D representation of the user’s location, enabling attackers to identify valuable information in the environment. In another demonstration, researchers from Georgia Tech used the accelerometer of a smartphone sitting next to a keyboard to track the vibrations of individual keystrokes. They identified typed text with up to 80 percent accuracy.

At the 2012 TEDGlobal conference, Malte Spitz, a member of Germany’s Green party, showed he could use telecom data to re-create his whereabouts in detail for six months. Hackers have likewise already used malware to track a user’s location. Combining that information with other sensor data, such as images from the camera, could give them an unprecedented look into their victims’ lives.