Eat anything you want, then remove some of it before it's digested. 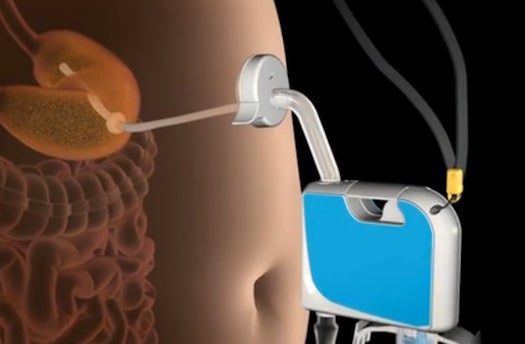 This is the good news about a recently-patented gadget that sucks food out of the stomach: it could work as a last-ditch effort to get obese people to shed some weight. This is the bad news about said gadget: the method might be a little extreme.

AspireAssist, created by Segway inventor Dean Kamen and a team of bariatricians, works like this. A valve gets surgically implanted in the user’s stomach, and the gadget sends a tube through it into their belly. About 20 minutes after eating, the gadget sucks out some food, and when the user squeezes a bag filled with water, the liquid gets sent back into the stomach instead. Rinse and repeat until up to 30 percent of your meal is gone. (There’s no anesthesia involved, but some sedatives will be used along with it.) It’s already available in some parts of Europe, but no FDA approval yet.

Here’s the word from the gadget’s site:

The aspiration process is performed about 20 minutes after the entire meal is consumed and takes 5 to 10 minutes to complete. The process is performed in the privacy of the restroom, and the food is drained directly into the toilet. Because aspiration only removes a third of the food, the body still receives the calories it needs to function. For optimal weight loss, patients should aspirate after each major meal (about 3 times per day) initially. Over time, as patients learn to eat more healthfully, they can reduce the frequency of aspirations.

In a trial, obese people who used it lost, on average, about half of their excess weight. That was about 45 pounds, according to the patent. But there were some hiccups, too, like when the machine had trouble breaking up certain foods. One patient “avoided eating cauliflower, broccoli, Chinese food, stir fry, snow peas, pretzels, chips, and steak.”

Other than that, it sounds convenient (unless you live in China), albeit a little gross. Not surprisingly, though, convenience and effectiveness don’t always inspire the greatest confidence when it comes to weight loss, and some experts are already a little wary of AspireAssist. One wondered to LiveScience if this was just an At-Home Bulimia Machine™. Nutrients from food are kinda important, after all, and removing one-third of them might not be such a good idea.