How Crowdsourcing Will Bring Mapping Inside

Maps don't help much indoors, but that's about to change--thanks to you. 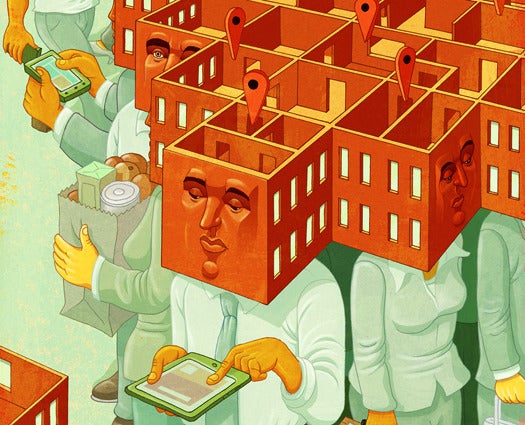 Mental maps are becoming a thing of the past. GPS devices and smartphones have taught millions of travelers to expect turn-by-turn directions anywhere they go—and with good reason. Mapping services plot accurate courses nearly everywhere, with one glaring exception: They’re pretty much useless indoors. Given current mapmaking methods, such as the Google Street View car, they will remain that way. A person, though, is not limited to streets and highways. And a vast group of people (i.e., smartphone users) could provide enough information to map the great indoors.

Broader cell connectivity has prompted a big change in mapping methodology. Early on, GPS companies relied heavily on government-provided maps, which they supplemented with road data from fleets of survey cars. As mobile networks grew, companies began gathering data from GPS units and smartphones to monitor traffic and congestion points. In 2006, Tele Atlas, which provides maps to GPS manufacturer TomTom, began allowing users to flag areas where the map was inaccurate so that the company could investigate places that require revision. Apple Maps has a similar feature.

Several small organizations have gone a step further and proved that users can collaborate to create reliable maps from scratch and refine them over time. OpenStreetMap, a nonprofit, currently has more than 900,000 map contributors who have plotted 1.5 billion map points. California-based Waze has a network of 100,000 map editors, monitored by a team of volunteer managers.

To reach within high-rises, malls, and airports, mapmakers will need to fully embrace this kind of crowdsourcing. In late 2011, Google began allowing building and business owners to upload floor plans to Google Maps; so far, the service has collected more than 10,000 maps of airports, museums, shopping centers, and other venues. Microsoft’s Bing Maps has about 3,000. IndoorAtlas, a start-up, is also building a database of user-generated floor plans.

Still, a map is useless to someone who can’t find himself on it, so companies are now developing methods to locate users indoors, where GPS signals can’t reach. The In-Location Alliance, a new industry consortium, proposes establishing locations based on Bluetooth signals and Wi-Fi hotspots. IndoorAtlas uses readings from a phone’s compass to locate a person through variations in the building’s magnetic field. The method is accurate within about a yard—even more precise than most GPSs. Services could then pair that data with a crowdsourced map and route a traveler to whatever store, gate, or office he’s searching for. Getting lost indoors—or out—could soon be as much of a relic as a paper map.