As long as you reset a weight every 30 minutes, you can have a continuous, battery-free light source. 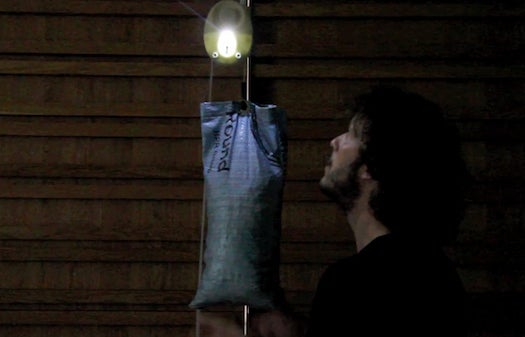 GravityLight: lighting for the developing countries from T4 on Vimeo.

Kerosene lamps used in off-grid, rural areas are a major problem. They’re bad for people’s health and the environment’s. One startup’s solution is to tap another, greener resource, something we all have in abundance: gravity.

The invention, GravityLight, does exactly what the name suggests: It keeps a light going through the power of gravity. As an attached weight falls, it pulls a cord through the center of the light, powering a dynamo. That dynamo converts the energy from the falling weight into power for the light. (It’s the same idea as a hand-cranked device, just more vertical.) The weight can be set in a few seconds, and as it slowly reaches Earth, enough energy is generated to keep a light working for 30 minutes. As long as it’s set every 30 minutes, it makes for a green, battery-free, continuous stream of light. Other, similar devices like battery chargers could be used through the same process, too.

The inventors say the gadgets can be sold now for less than $10, which would make a return on investment for owners three months after dumping kerosene lighting. And speaking of investments, the group has already shattered the goal for its Indiegogo campaign, meaning we’ll hopefully see these in action soon.