You can barely tell the difference between it and the real thing. When Camille Beatty was 10 years old, she dismantled a TV remote and handed the parts to her surprised father, Robert. Next came a string of questions about the circuitry. “I got to a point in my life where electronics seemed magical, but I knew they weren’t,” says Camille, now 13. “So I started opening some up. I wanted to know what was inside and how they worked.” Robert hadn’t a clue, so he, Camille, and his other daughter, Genevieve, now 11, searched the Web to find out. The family used their newfound knowledge to build their first robot only weeks later.

Today, the Beattys’ garage in Asheville, North Carolina, is a veritable bot factory. “We’ve built robots that crawl, robots that fly, robots that shoot BBs, and robots that can autonomously move around the house,” says Camille, who handles machining and mechanical assembly while Genevieve does the soldering and wiring. One of their projects has even made it into the New York Hall of Science, where nearly 500,000 annual visitors can see it and drive it around a faux Martian landscape.

The family’s museum collaboration began with a robot they named Spirit II, a 500-part, six-wheeled, remotely operated machine built in the likeness of NASA’s solar-powered Spirit rover. They re-created the rover’s complex rocker-bogie suspension system, which can clear tall obstacles, and studied patents to replicate the unique gearing that turns Spirit in place 360 degrees. Samuel Litt, the museum’s director of information technology, was looking to replace a three-wheeled “mousebot” in a Mars exhibit when he stumbled upon photos of Spirit II on the Beattys’ workshop blog. “It looked like some really impressive technology,” Litt says. “Meanwhile, our old robot just crept along and didn’t even look like anything you’d put in space.”

At Litt’s request, the Beattys agreed to build another—this time with a few modifications. The museum wanted a durable bot that could last nine hours on one charge. It also needed to display infrared video revealing a heated rock (a crude but effective simulation of discovering water-containing Martian minerals, which reflect infrared). To fit comfortably within the exhibit’s 250-square-foot enclosure, the girls and their dad also designed the new version to be about a third smaller than Spirit II.

The Beattys installed eight range-finding sonar sensors on the wheels to prevent anyone from driving the robot into a wall. They also added a green laser to show the location being measured by a temperature sensor. In June, the Beattys donated the robot to the museum, which named it Camille. The family also built and donated a second unit, called Genevieve, with streamlined electronics and an upgraded camera.

Since the robots’ debut, project requests have poured into the Beattys’ home from around the world. These days, the family is handcrafting a half-dozen likenesses of space robots, including Russia’s Lunokhod moon rover, for a museum in Prague. “It’s sometimes irritating when the girls have to do homework,” Robert says. “I’d rather be building robots with them.”

A rechargeable 7.4V lithium-ion battery with an electric power capacity of 10,000 mAh stores enough energy for a full day of nonstop roving—and then some. The solar panels are real but don’t function well indoors. 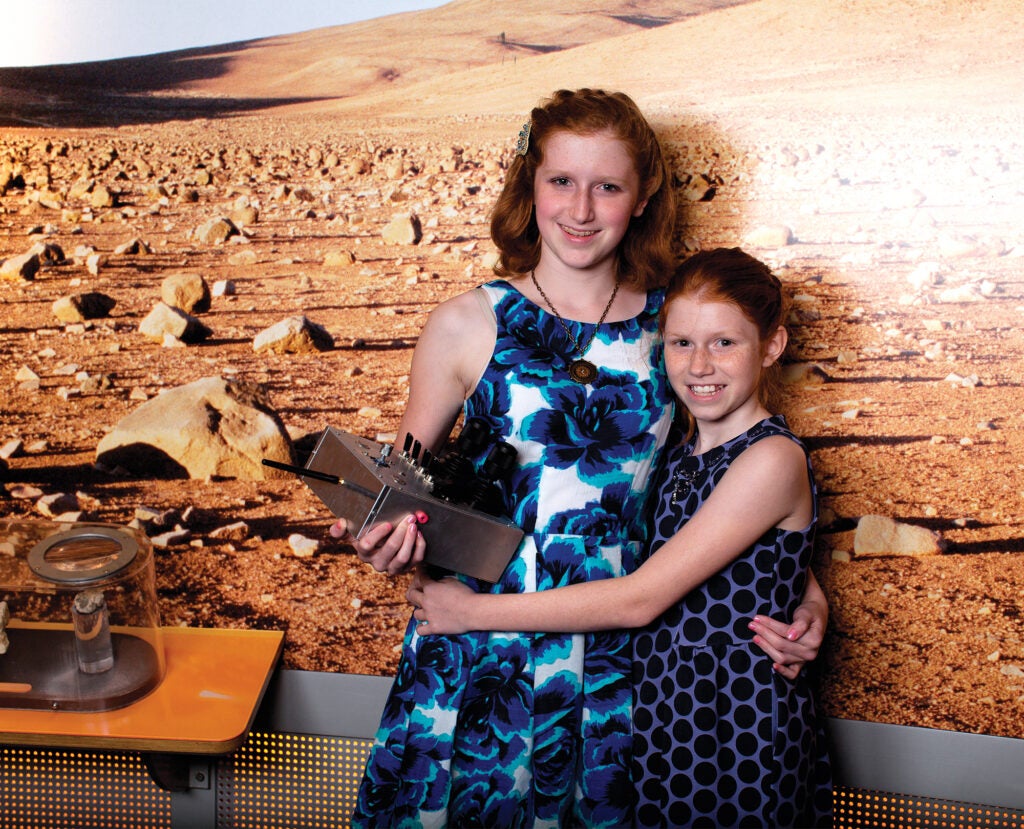 A UHF radio chip inside the rover lets museum visitors steer it wirelessly. Staff can also drive the robot using a radio remote control that Camille (left) and Genevieve (right) once built for a BB-shooting tank bot.

A rocker-bogie suspension enables the rover’s wheels to clear obstacles taller than a foot. Servomotors allow each wheel to move independently and turn the robot 360 degrees in place.

Custom CNC Mill
Hand tools weren’t cutting it for high-quality robots, so the Beattys built a computer-guided milling machine. A water-cooled spindle turns at 24,000 rpm, while a three-axis gantry system moves the spindle to carve out metal, plastic, and other materials.

Wireless Telegraph
When Camille and Genevieve started tapping out messages in Morse code, their dad came up with a quieter idea: a 21st-century telegraph. They wired two antique telegraph keys to an Arduino Nano microcontroller, a UHF radio, and a speaker. The devices can communicate up to a mile away.