Risky Business: 23andMe and the FDA

As a geneticist. I spend a lot of time looking at genomes. But until I taught my “Genetics and Society”... 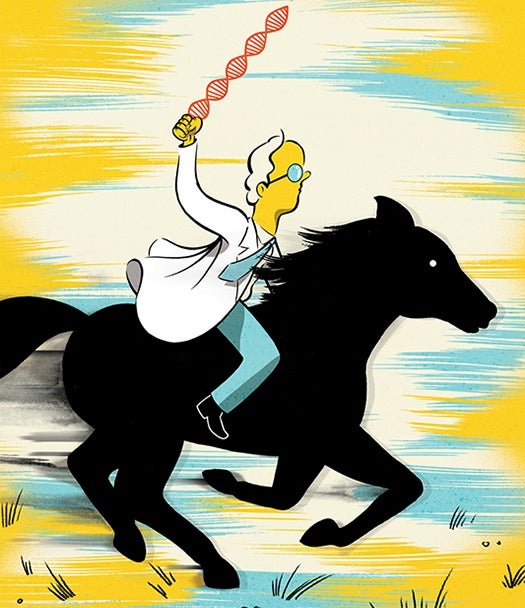 As a geneticist. I spend a lot of time looking at genomes. But until I taught my “Genetics and Society” class at Berkeley last year, I had never looked at my own DNA sequence. What better way to teach genetics than to use my genome as an example of what can and can’t be learned? So I sent $99 and a vial of spit to 23andMe, the now beleaguered “direct to consumer” genomics service.

23andMe determined my A’s C’s, G’s and T’s at a million sites on my genome. Part of the fun was using their web tools to begin to interpret the results. My genome said I have black curly hair and brown eyes. Check. I’m half Middle Eastern, half European. Check. (“What did you expect?” teased my sister). The relative finder identified close and distant cousins, and we exchanged emails to try and figure out our shared ancestors. I even bought kits for my parents to tease apart some of these connections.

23andMe estimated that I had modestly elevated risks for some diseases and reduced risk for others. I shared these reports with my class and we talked about how DNA sequence informs ancestry, relatedness, traits and risk estimates, and the inherent limitations of these analyses. Genetics plays a role to be sure, but only in rare cases is it destiny.

Last week, 23andMe stopped providing health-related genome interpretations to new customers. The change came about because of a letter the Food and Drug Administration sent 23andMe two weeks ago, warning that it had ignored repeated requests for information necessary to approve its product. Because the company aggressively advertised that it provided “health reports,” its claims fell under FDA regulations. It now faces a $5-million class action lawsuit in California for false and misleading advertising.

Sadly, the company’s woes play to those who argue that personal genetic information is too complicated for lay people to understand and should only be delivered by medical professionals. It would be unfortunate if this paternalistic attitude gained ground because of 23andMe’s apparently cavalier neglect of the FDA’s requests, and ended up limiting direct access to genetic information.

The FDA probably wouldn’t have bothered 23andMe if they had restricted their advertising to genealogy and ancestry. But 23andMe’s ad campaign focused on health, which ran afoul of fundamental realities of human genetics.

Using DNA sequence to predict disease risk is a complicated business. The vast majority of the DNA variants that 23andMe tests have little or no direct health impacts. They are simply random mutations that spread through the human population by genetic drift. While some diseases are caused by mutations tested by 23andMe, most genetic predispositions result from the combined effect of many gene variants, each making a small and hard to measure contribution. Importantly, non-genetic factors—like diet and environment—also contribute in unpredictable ways. So 23andMe’s health report can only make very rough estimates of disease risks based on a still developing scientific literature.

In some cases, the reports may even be less predictive than the conventional family history you give to your doctor, since the unique sequence variants in each family are beyond the scope of the 23andMe test, which only looks at the most common variants in human DNA.

Any customer who signs, and hopefully reads, the disclaimers on the 23andMe website should appreciate that the reports are only a step or two beyond recreational genomics, to be taken with a shaker of salt. I, for one, was impressed with the company’s effort to educate customers about our limited ability to interpret genetic data. But 23andMe didn’t need to convince me. It needed to convince the FDA.

Awareness of one’s genome can help people learn the ins and outs of genetics, and may even become better-educated medical consumers. But common sense must be used and caveats understood when dealing with uncertainty and risk. A low risk estimate isn’t carte blanche to skip your annual checkup. There are always baseline risks no matter what genes you inherited, and you may have a relevant rare variant that isn’t tested by 23andMe. Similarly, a high risk estimate may be a false positive, but may justify a follow up with your doctor for more rigorous tests.

Even though 23andMe stopped providing its health reports until the FDA is satisfied, they do still provide the highly accurate raw A’s, C’s, G’s and T’s, which third party sites—presumably not subject to FDA regulation—can interpret (Interpretome is free, Promethease charges a few dollars).

I hope that 23andMe can recover. It would be a shame if its problems with the FDA were to poison the direct-to-consumer genetics movement and deprive consumers of a cheap and simple way to access that information. Hopefully it’s not too late.

Daniel Rokhsar is Professor of Genetics, Genomics, and Development at UC Berkeley and an ardent advocate for 23andMe among friends, students, and relatives. His goal is to reconstruct the genomes of his great grandparents using sequence from his cousins, most of whom still need to send their spit.