This Sculpture Turns Movement Into Music Musicians incorporate the Treequencer in to a jam session at the Red Bull Studio in New York, NY, USA, on 17 June, 2013 // Aaron Rogosin/Red Bull Content Pool // P-20130625-00248 // Usage for editorial use only // Please go to www.redbullcontentpool.com for further information. //. Aaron Rogosin
SHARE

As summer beat down on an outdoor music festival in Brooklyn in June, four men from Portsmouth, Virginia, took shelter beneath a tent. They were one of six teams at McCarren Park hoping to win Red Bull Creation, an annual build-off based on a surprise theme. This year’s challenge was to construct a crowd-friendly, never-before-seen instrument. The catch: Teams had only 72 hours to vie for a $10,000 grand prize.

North Street Labs, as the Virginia team called itself, was taking its third crack at the event in as many years. Last year, the group built a death-defying merry-go-round for a “game of games” contest. This time, Creation’s judges started the countdown clock by asking each team to make a musical instrument capable of composing and playing live music for, and by, the public. North Street Labs’ programmer, Steve Shaffer, reacted with apprehension. “Uh-oh,” he thought, “I’m deaf, and I have to make music.”

Despite Shaffer’s disadvantage—he was born with less than 50 percent hearing—and the entire team’s self-professed lack of musical talent, North Street Labs moved forward in high spirits. A few rounds of beer helped the group settle on an idea: The team would build a giant interactive musical tree, later dubbed the Treequencer. The trunk and branches would be made of steel pipes and outfitted with motion sensors. Dancing around the tree device trigger unique beats and melodies that would emanate from a speaker nested in a birdhouse.

The men raced to a nearby home-improvement store, bought steel conduit, and returned to the park to tape together a mock-up of the tree’s metallic skeleton. “All the other teams freaked out when they saw that,” Shaffer says. Happy with the basic design, they welded the pipes into a 10-foot-tall frame and rush-ordered electronic parts.

A day into the build, North Street Labs decided to split up the work. Shaffer’s coding background made him the best person to convert sensor data into music, but he couldn’t hear above the din of the festival. “My hearing aids cut off at 120 decibels,” he says. So he retreated to a quiet hotel room and hunkered down. For the next two days, he taped motion sensors to a wall and wrote software to turn sensor output into sound, often dancing around the room to test his work. Meanwhile, his teammates built a birdhouse to contain a speaker, microprocessor, power supply, and music interface. Just before the 72-hour mark, Shaffer rejoined them at the park and hooked up the sensors, finishing the Treequencer with only minutes to spare.

The competition was stiff. One team built a scanner to convert graffiti into sound, another a robotic drum kit, which ultimately won [see “Two More Instruments,” below]. North Street Labs took home only cartloads of Red Bull soft drinks and leftover tools, but the team’s tree did attract musicians: The band Superhuman Happiness recorded a new song and music video with the Treequencer. Someday, Shaffer and his colleagues hope to waterproof their invention, add solar panels to power it, and permanently install it outdoors. “The Treequencer came out better than we envisioned it,” Shaffer says. “If we can make something like that in 72 hours, it makes me wonder what we could do in a month.”

1. Proximity
Three ultrasonic sensors at the top of the trunk emit inaudible high-frequency sounds and listen to the echoes to determine a person’s proximity. Each sensor triggers a different sound. One elicits piano notes, for example, and tunes them according to distance.

2. Motion
An X-band sensor (similar to those in home alarm systems) measures speed. Shaffer coded the sensor to alter a digital drumbeat based on a dancer’s pace.

3. Computing
Inside the birdhouse, an Arduino microprocessor gathers data from all four sensors and converts it into commands for a MIDI interface, which stores a large library of digital sounds.

4. P****ower
A 120V power strip feeds electricity to the sensors and a 100-watt speaker harvested from a PA system. Red LEDs that illuminate the birdhouse, meanwhile, get energy from a 250-watt computer power supply. 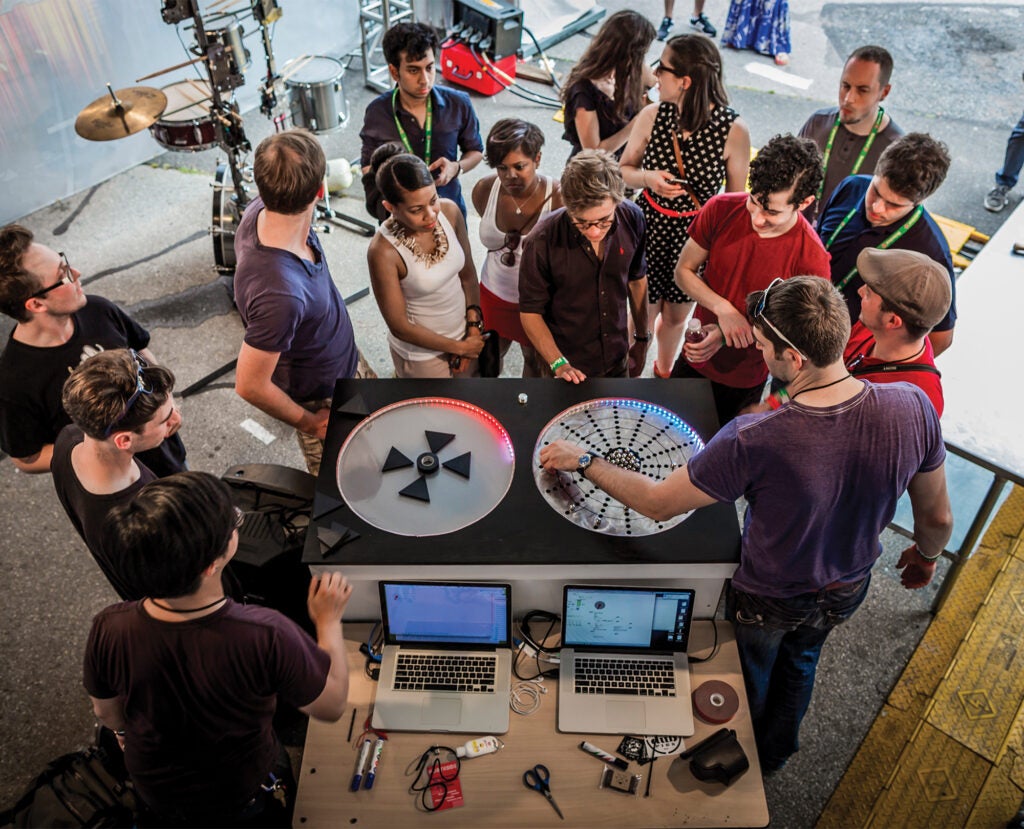 Autoloop
MB Labs, a team from Chicago, built a giant electronic drum sequencer during Creation’s 72-hour build-off. It consisted of a robotic drum kit and two discs outfitted with object-detecting cameras. Users could change the rhythm and melody by moving triangles and marbles around the discs. The intricate musical contraption wowed judges, who awarded MB Labs the $10,000 grand prize.
Time: 72 hours
Cost: About $2,000

Erte-tronic **Deco Decoder****
Minneapolis-based 1.21 Jigawatts built a graffiti translator. Players sprayed colorful images onto a roll of paper and pressed a button to feed it through the back of the instrument. Photo sensors scanned the artwork and converted it into data as it moved. Depending on the paint’s color, contrast, and location, the machine triggered differently tuned copper chimes. The device won the People’s Choice Award and earned the team a CubeX 3-D printer as a prize.
**Time: 72 hours
Cost: About $1,600

This article originally appeared in the Novemberr 2013 issue of Popular Science.