Can We Hack Our Vision To See Infrared With The Naked Eye?

A team of biohackers is attempting to modify the human sensory spectrum. 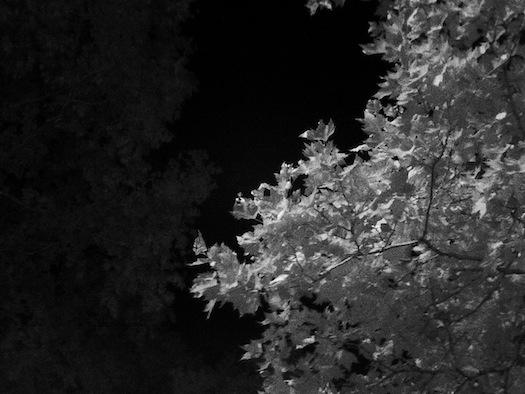 “Can you imagine a color you’ve never seen?” Jeffrey Tibbetts asks, looking directly into the Skype camera. We would like to think that we can, of course, that our imaginations are limitless. But the answer, no matter how much we skirt around it, is actually “no.” However, Tibbetts insists that he himself can see another color. He, along with several friends, is part of a homegrown experiment where he has attempted to alter his vision to see in the infrared, which humans can’t usually see. The three experimenters have just completed a 25-day nutritional regimen and, as their bodies return to normal, they will continue to document their vision for the next two weeks. Very early results appear promising, albeit incomplete. But several experts in ophthalmology have doubts about the purpose and safety of the project, not to mention the validity of the results themselves.

People who want to improve how humans function span the full range of invasiveness, from gym rats who chug protein shakes to biohobbyists slicing open their flesh in basements. Tibbetts and his co-experimenter, Gabriel Licina, are solidly in between. The team spent six months reviewing previous studies to craft a nutritional protocol designed to modify their vision, bearing the mark of their backgrounds in human anatomy and molecular biology. But their acceptance of the risks reflects their rogue scientist attitude; test subjects who don’t follow the protocol, either through wrong vitamin dosage or improper diet, could go blind.

“I’ve always been interested in the ways we can enhance human beings, and the most available is pretty much our sensory systems,” Licina said. So the two began to study the literature on how to see in the infrared. Before the ubiquity of infrared goggles, military research projects dating back to the 1930s tested infrared vision in rats. After six months of research, Tibbetts and Licina decided on a tactic: regular doses of a vitamin over a series of months with the aim of letting their eyes make sense of light in longer wavelengths.

The rods and cones in our eyes allow us to see the range of colors that we do. Rods help you see when there’s not much light (and not so well in color), and the three different types of cones are sensitive to overlapping yet very different wavelengths, so we can see in the full range of colors. A dietary compound called retinal, a form of vitamin A, binds to enormous proteins called opsins in the eye, which convert light into a chemical signal that your brain can interpret. When a photon hits the retinal, a chemical reaction takes place at the end of the appropriate cone in your eye. And, in just a few milliseconds, you’re seeing in color.

Licina and Tibbetts planned to override this function by replacing their regular consumption of vitamin A (found in dairy products and some vegetables) with vitamin A2, a version of vitamin A that humans don’t typically consume. The experimenters kept a strict diet for 25 days, mixing in a dose of A2 to a powdered dietary supplement and drinking it throughout the course of the day to ensure they consumed no vitamin A (they were also allowed a few foods devoid of vitamin A, like peanuts and white onions). The experimenters hypothesized that increased A2 might lower the range of wavelengths that these cones can absorb, extending from visible light down into the infrared spectrum. But the protocol also had some unexpected side effects, like reduced appetite and emotional instability, Licina said.

The experts I spoke to are skeptical that this protocol could have its intended effect on vision. Jim Ver Hoeve, a senior scientist in the Department of Ophthalmology at the University of Wisconsin in Madison, doesn’t think it could work at all: “[Tibbetts and Licina] are saying that if they get a different form of vitamin A that it can alter the photoreceptor characteristics—which they’re not going to alter.” The A2, he said, wouldn’t have any effect on the wavelengths that the photoreceptors can absorb. “Their experiment blurs on insanity.”

A person runs other risks in eliminating or changing dietary vitamin A, too. “We see people with vitamin A deficiencies all the time and they are very visually impaired,” said Ver Hoeve. “They can’t see in the dark, the longer [the deficiency] goes on they can’t see in the light.” And the effects can sometimes be irreversible, from weakened immune systems to even death. But Tibbetts and Licina don’t see it as a problem, at least for the 25 days of their experiment. “We’re talking about deficiency for upwards of a year,” Tibbetts said. “Until you get really far down this path, your vision would return within days [when you consume vitamin A again].”

But not all experts are as critical. “It seems entirely conceivable,” said Benjamin Backus, an Associate Professor at the Graduate Center for Vision Science at SUNY College of Optometry in New York City. “If you took out vitamin A and replaced with A2, you could lose the ability to see blue [which has short wavelengths]. Or you might have a transition period where you’d respond to a larger range, but the cost would be some loss of sensitivity within the old range.”

After six months of studying the literature to develop a nutritional system, Tibbetts and Licina (along with 5 other experimenters) put their protocol to the test—on themselves. They also orchestrated a successful crowdfunding campaign, necessary to buy the vitamin A2, which costs about $1,000 for a fingernail-sized drop of oil. The experimenters took 1.6 milligrams of oil every day, about $25. “We realized that our allowance money and pocket change weren’t gong to cut it,” Licina said.

To test whether their eyes were really absorbing infrared light, the experimenters created a electroretinograph (ERG), a small box that a person puts over her eyes that flashes LEDs at different wavelengths. The experimenters modified the ERG, which is open-source on the Internet, to only flash light in infrared wavelengths, longer than 730 nanometers (visible light ranges from 400 to 730). The system wasn’t perfect—”there’s some bleed” between the different wavelengths, Tibbetts admitted—but the charts the team posted online showed that their eyes were responding to light in the infrared wavelengths just below the visible spectrum, around 950 nanometers:

Licina and Tibbetts hope to get their study published in a reputable journal, but Ver Hoeve of the University of Wisconsin had some concerns about their methodology. “Those ERG measurements would never be published in a journal,” he said, mostly because they lack information to make them repeatable, like how often the measurements were taken. Ver Hoeve is also concerned that the experiment had no control, an ERG from someone not taking the vitamin A2. But Licina himself, who was not taking the vitamin A2, gave the base-level readings for comparison. “We also have reading from pre-vitamin and are taking some now post supplementation,” he said.

For SUNY’s Backus, who is more optimistic that the experiment will be successful, the lingering question is the reason for all of this. He himself has spent days on end in utter darkness to test a treatment for amblyopia, a childhood disease that can cause adult blindness. “So I’m not averse to trying wacky things that are high risk and high reward, but I don’t know what the reward here would be,” he said. “Getting a cool visual effect is not a sufficient benefit to outweigh the cost.”

But to Tibbetts and Licina, their project looks different. They wanted to push the boundaries of human capabilities, like many before them, but they wanted to also demystify the scientific process behind it. “We wanted to be able to do science without the restriction you get working in an academic setting,” Licina said. “If we don’t get it published, we’ll open-source-license it on the Internet,” Licina said. “This is really cool research that should be accessible to everybody.” They worked to make their nutritional protocol comprehensible, although not all of the test subjects were able to follow it; of the six experimenters who started the protocol, only three lasted more than two weeks, dropping out because other things mattered more to them, like socializing over meals. “As long as you follow the rules, anybody can do it,” Licina said. Although Backus said he wouldn’t do the experiment himself and would have serious ethical concerns bringing it to a college review board, “I can’t in good faith to tell someone who wants to do this not to do it,” he said, as long as the subjects are properly monitering their health and looking out for signs of vitamin A deficiency.

For those not ready to try the protocol themselves, the biohackers’ descriptions of infrared vision will have to suffice: “Anecdotally, subjects are seeing strange reddish colors, losing blue/green definition, and have been pointing out things in the dark to others who can’t see them at all,” Licina said.

To see the final results of Tibbetts and Licina’s experiment, visit their experiment page.