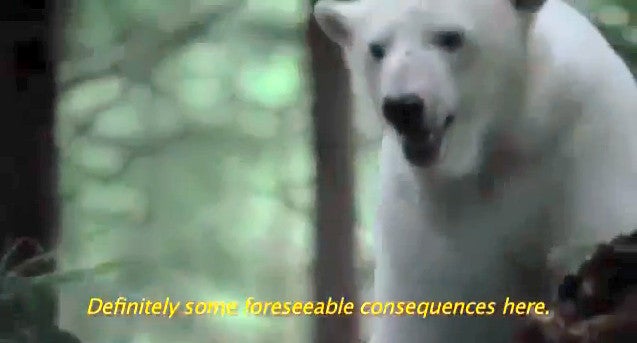 Just as we reach the breaking point for bad news about climate change, along comes something that kindles our hope for humankind: this sharp hack transforming trite automobile advertising, and by extension the message that we can buy our way out of this crisis, into a foul-mouthed polar bear’s flight from the great Arctic thaw, ranting all the way at the humans who have destroyed his home. Be sure to watch and read to the very end.

The bear is on to something. There is a scientific disconnect in linking electric vehicle use to curbing the great Arctic thaw, because at present electrics merely shift the climate-destabilizing carbon dioxide emissions upstream, from the tailpipe to the smokestack.

A recently published study, out of the University of North Carolina, found that in order to lower both greenhouse and smog-causing emissions, a rise in electric vehicles on U.S. roads must be coupled with a nationwide cap on CO2 emissions and strong renewable energy standards, aiming for a 40 percent reduction from 2010 levels by 2050. These policies will push coal-fired power plants offline, in favor of renewables and natural gas.

In 2012 about 18 percent of U.S. energy use came from coal; 27 percent from natural gas; 36 percent from petroleum-based fuels; and 17 percent from nuclear and renewables combined, according to the U.S. Energy Information Administration.