When it rains, it spores 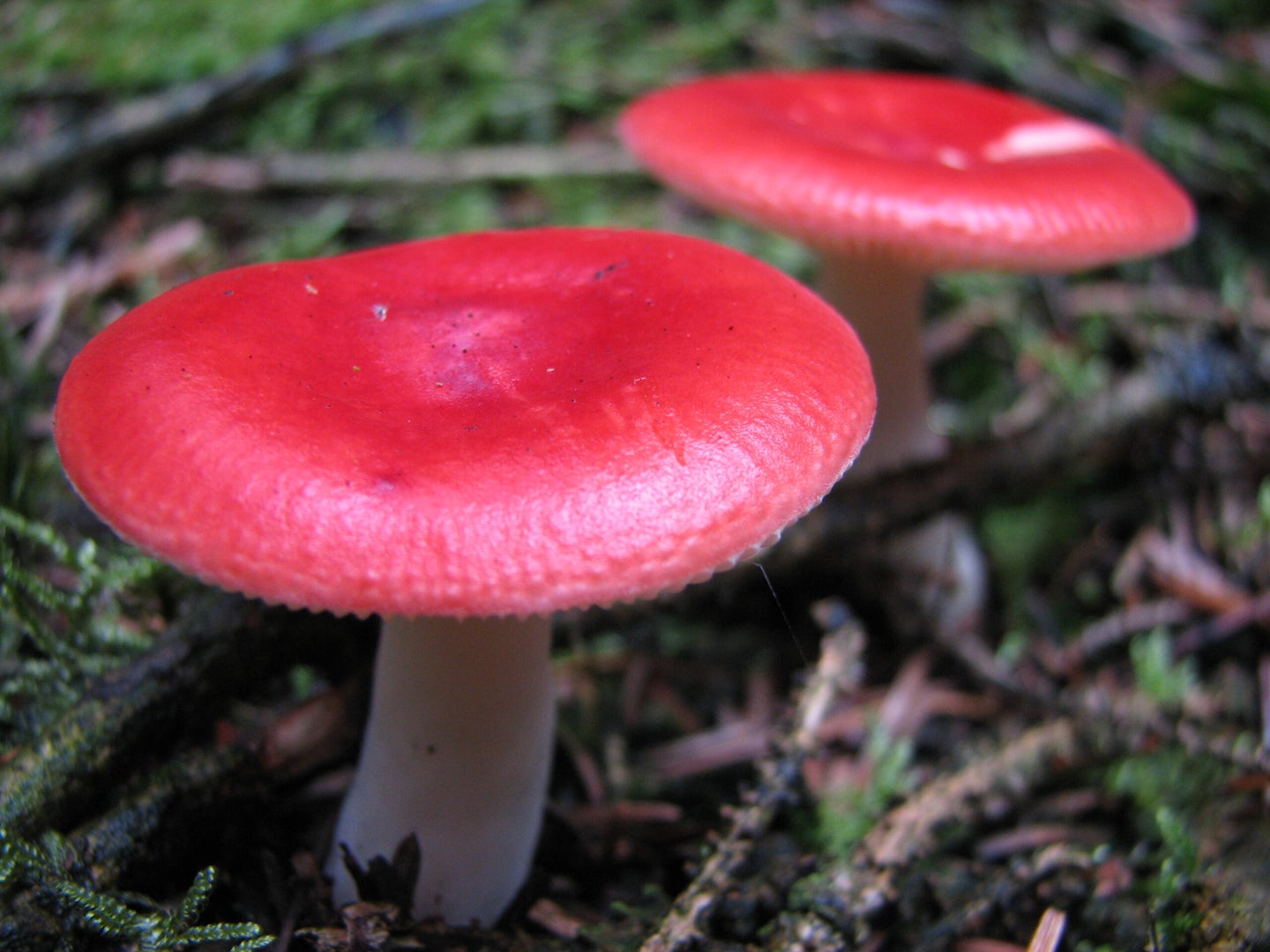 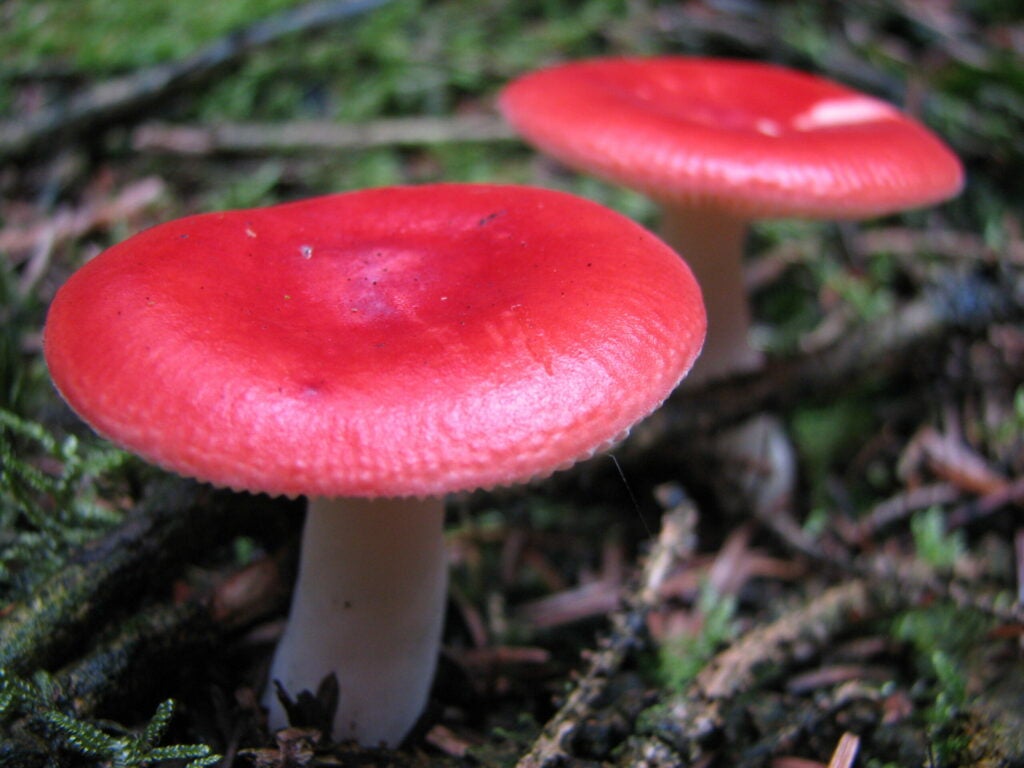 Russula emeta. Spores from a similar mushroom in this genus were used in the study.

Fungal spores are all around you. Even now, as you read this, there are likely spores floating and dancing around your head. Millions of tons of them are dispersed into the atmosphere every year. Some spores, such those from molds, can be harmful to breathe in, but the majority are harmless.

Fungi are crucial to nutrient recycling in almost all environments, but it turns out their masses of spores carelessly tumbling through the air might also be beneficial. Recent evidence suggests that spores released into the air from mushrooms act as nuclei for the formation of raindrops in clouds. This may promote rainfall in ecosystems—like those in the tropics—heavily populated by mushrooms and other fungi.

Spores are how mushrooms reproduce. (A mushroom itself is actually a sexual structure, but that’s another matter.) They are single-celled particles that, like seeds, are dispersed to eventually develop into new fungal organisms.

Ecologists Nik Money and Maribeth Hassett of Miami University, Oxford, Ohio and Mark Fischer of Mount St. Joseph University, were looking at how spores are able to hold onto water droplets when they discovered that the spores may contribute to the local weather. 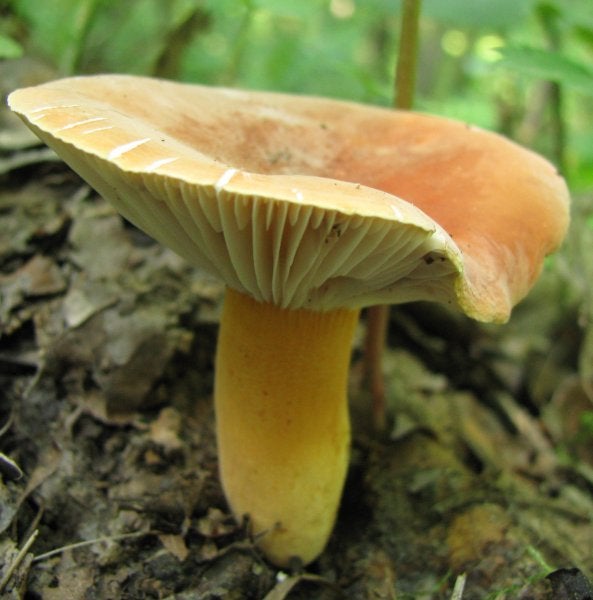 Lactarius hygrophoroides. Spores from this species were used in the study.

Among basidiomycetes—a giant group of fungi (some 30,000 described species) that includes mushrooms—the “Buller’s drop” method is a common form of spore dispersal. Named after A.H.R. Buller, the “Einstein of mycology,” the method involves the launching of spores by a catapult mechanism of sorts that uses droplets of water as the counterweight.

Here’s how it works. Nestled within the gills or pores that line the underside of a mushroom’s cap are billions of tiny spores sitting in anticipation on top of tiny little stalks. Water vapor in the air condenses on a spore’s surface. One droplet of water pools in a ball at the base of the spore and waits. As more water condenses on the spore, it slides down its sides and collects on the ball of water at its base. Eventually the drop of water gets so big that all of a sudden it drops off the spore. The sudden displacement of mass is so big the spore is catapulted into the air at roughly 3 feet per second. 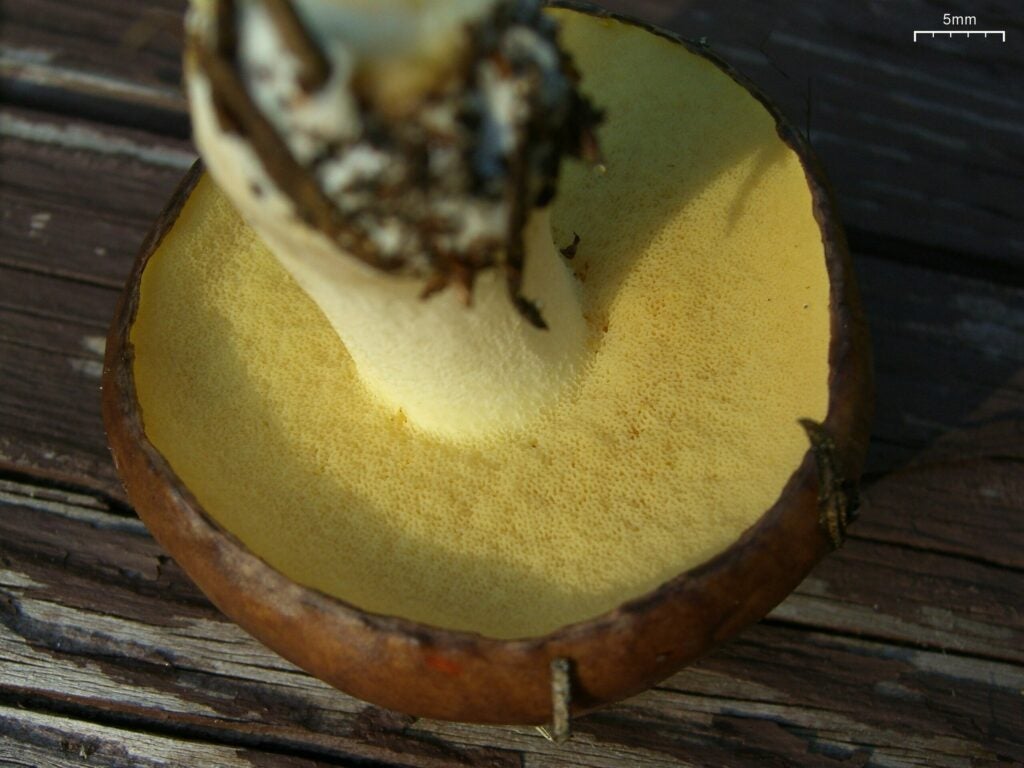 Some mushrooms store their spores in gills, or pores, like these pictured here. Suillus brevipes

After collecting spores from various species of mushrooms gathered from the wilds of Ohio, the researchers put the spores into a chamber where they could control the relative humidity. As they cranked up the levels of water in the air they observed how the spores collected droplets under an Environmental Scanning Electron Microscope. What they found was that sugars on a spore’s surface attract and hold water from the surrounding environment.

When the relative humidity was 100 percent or more, noted the ecologists, “liquid water formed a thin shell around the entire spore.” As the humidity increased, they collected more and more water. And although spores don’t need to move around to get droplets to form on them, “movement in a cloud increases the chance of collisions, which is vital to form bigger droplets,” says ecologist Nik Money. This is like a snowball rolling down a hill (or like the video game aptly titled Spore, for those who are familiar). “Tropical rain forests are an ideal location for the operation of this mechanism” because of the low lying clouds and warm, wet air, says Money, but “forests in the United States that support the biggest populations of mushrooms may enjoy this feedback mechanism” as well.

A single gilled mushroom can shoot out up to 30,000 spores every second, adding up to billions of spores a day. Depending on air currents, they can be carried up as high as 50 miles up in the atmosphere and drift around for months. “There are even cases in which fungal spores have blown across the Atlantic Ocean” says Money. With this prolific level of spore production, it’s not hard to see how millions of tons of these tiny somersaulting balls could collect enough water in clouds to cause rainfall. As the Ohio ecologists note in their study, “mushroom-forming basidiomycetes are vital to the productivity of many forest ecosystems supported by heavy rainfall.” They don’t believe that the rainmaking abilities of mushrooms is an intended adaptation, but just a lucky coincidence that happens to benefit them, since mushrooms thrive in moist areas.

The positive feedback loop it creates, does, however, have other implications as well. Just as fungi that need rain for growth shed massive amounts of spores that promote rainfall, a lack of rain could result in lower numbers of fungi that disperse lower amounts of spores—thus not helping rainfall. If changes in climate reduce rainfall, this hitherto hidden system could upend, possibly exacerbating drought.