Features: The Future of the Car Future Drive Advanced electric drive, autonomous navigations and other tecnological advances will revolutionize the... 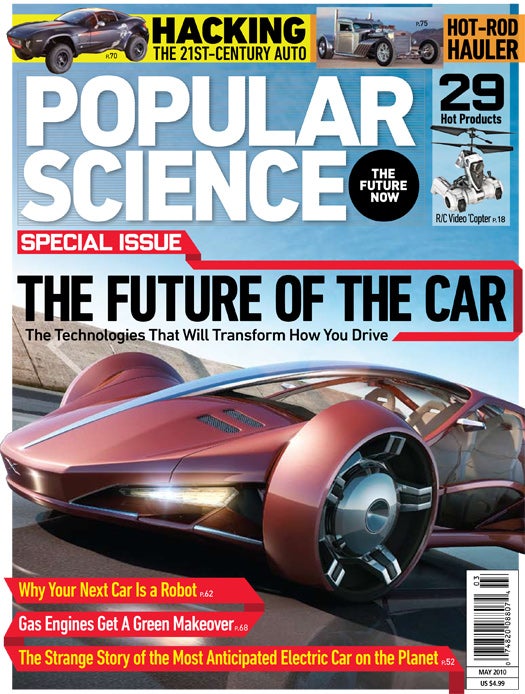 Features: The Future of the Car

Advanced electric drive, autonomous navigations and other tecnological advances will revolutionize the way we drive. PopSci presents three stunning visions for the future of the automobile. Illustrations by Nick Kaloterakis and Bob Sauls. Research by Jon Alain Guzik

A guide to the technologies, battery companies and carmakers that are bringing our electrified future here faster than you think **By Seth Fletcher
**

The Price of Karma

Greener than a Prius and hotter than a Maserati, the Fisker Karma promises to change the way the world thinks about electric cars. The only problem is that nobody outside the company has driven one yet. Will Henrik Fisker tempt buyers into the electric age, or is he already a relic of the past? By Bill Gifford

When Robots Rule the Roads

The Internal Combustion Engine Is Not Dead

Electric cars havenít killed the engine as we know it, yet. In fact, the century-old technology is getting stronger every year By Lawrence Ulrich

Todayís cars may seem too sophisticated for tinkering, but the DIY auto movement is thriving, yielding designs and innovations too radical for mass production. Here are four awesome examples of modern garage-guy ingenuity By Gregory Mone

Future of the Car: Online Exclusives

We cover all the bases: droolworthy visions, dramatic departures, genre-defining pioneers and true forehead-slappers (a nuclear-powered Ford sedan? Why not!). By Wes Siler

Does the Future of the Car Live in China?

And if so, what does that future look like? By Corey Binns