LEDs Could Replace Your Wi-Fi

The future of wireless communication is bright 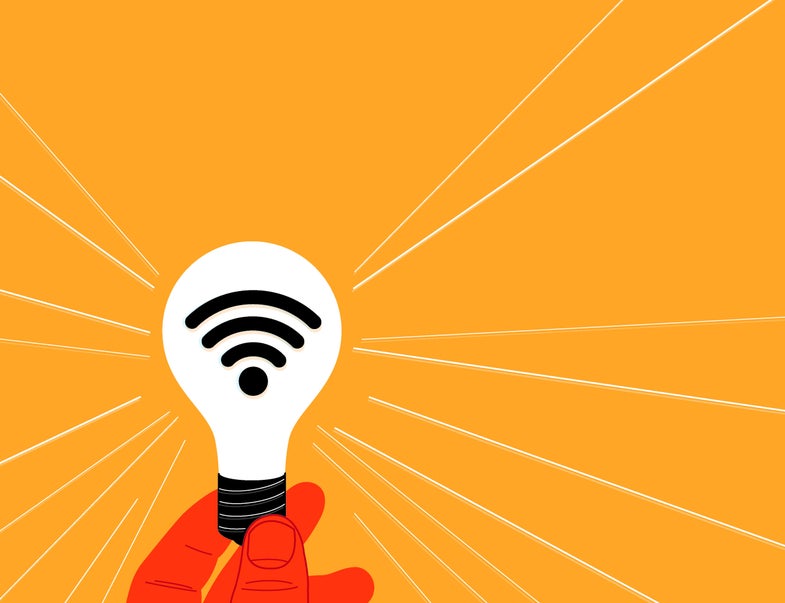 Whenever you use Wi-Fi to text or download a Serial podcast, the data travels over radio waves. The trouble is that these waves occupy such a narrow pathway along the electromagnetic spectrum, which limits the available bandwidth for smartphones and other devices. “You can never create more spectrum,” says Harald Haas, a lead mobile communications researcher at the University of Edinburgh.

If radio waves are like a crowded single-lane road, visible lightwaves are like a wide-open freeway. The solution for faster downloads is to take advantage of this larger swath through LED bulbs. When modified with a signal processor, the bulbs function as semiconductors, embedding digital information within lightwaves.

Light fidelity, or Li-Fi, promises to stream data to wireless devices in the form of LED flashes. They change intensity fast enough to transmit data at superspeeds—1 million cycles per second, or 1 megahertz (without a visual strobe effect).

Haas began working on Li-Fi in the early 2000s, and it reached speeds of only around 10 megabits per second—enough for Internet browsing but not for intense streaming. Then, in 2003, he managed to split the data across frequencies, upping the speed to 100 gigabits per second, or about 15 times faster than the fastest Wi-Fi.

Li-Fi is more secure too. Light can’t travel through walls, so the signal can’t either. The big drawback is the lights need to be on for the Internet to work. But an Indian startup Velmenni recently unveiled a Li-Fi-enabled LED that dims to a barely visible 10 percent of its full power and still transmits data.

The tech’s impact could be greatest in regions without existing Internet infrastructure. A single LED-outfitted street lamp could serve as an Internet hotspot for homes and villages in a developing area—all it needs is a receiver to embed the data in the flashes. “It took 15 years for everyone to get Wi-Fi,” Haas says. “With Li-Fi, I believe it will take five years, and the clock started last year.”

This article was originally published in the July/August 2016 issue of Popular Science, under the title, “Say Hi To Li-Fi”.