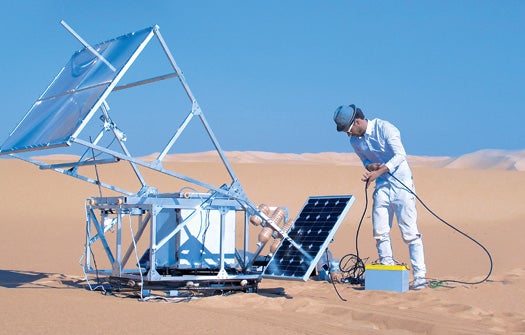 When design student Markus Kayser wanted to test his sun-powered, sand-fed 3-D printer, he knew the gray skies outside his London apartment wouldn’t do. So he shipped the 200-plus-pound contraption to Cairo, Egypt, flew there himself, and haggled with officials for two days to get it out of customs. A few small “tips” and 11 hours of driving later, he finally made it to the Sahara. But soon the mercury hit 104 degrees, his components nearly overheated, and he was forced to improvise.

The idea for the printer first came to Kayser a few months earlier. He wanted to find a project in which the sun did more than just power a device. He researched possibilities online, talked to physics professors, and learned about a process in which sand, heated to its melting point, cools into solid glass. With enough sun, a large lens and an ample supply of sand, he figured he might be able to produce glassware. 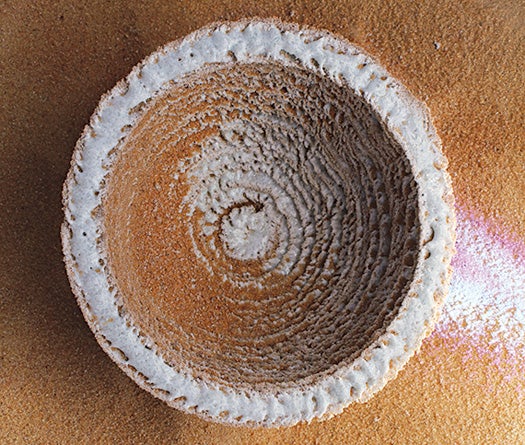 For the printer to work efficiently, the focal point of the lens would have to be trained right onto the surface of the sand. He knew the sun would move and the focal point would shift during the process, so he ordered a single 4.5-foot-wide lens and built a motorized frame for it. The central sandbox, in which the objects are printed, shifts in all directions, and the entire machine rotates around its center. Two aluminum arms, holding the lens at one end and solar panels at the other, can pivot from straight overhead down to a 45-degree angle to chase the sun. directed by a CAD design from a connected laptop, the printer uses the concentrated beam of sunlight to slowly trace an object into the sandbox layer by layer. The sun melts the sand, which cools into glass.

When the electronics began overheating, Kayser cut open a soup can, sliced and bent its sides into fan blades, attached the creation to a spinning DC motor, and aimed it right at the circuit board. The sun melted only the sand, and, after more than four hours, he printed a glass bowl, and later several sculptures. He admits they’re not perfect; he says he could have used more-complicated optics. But, he adds, perfection wasn’t the point: “This is about showing the potential.” 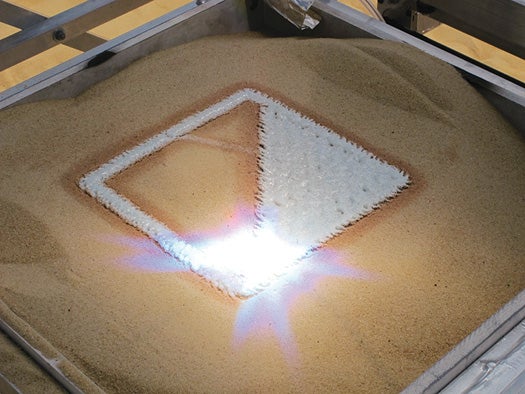 After all the layers are done, Kayser digs the object out of the sandbox

Kayser attached a cylindrical sun tracker to the frame perpendicular to the lens. When the sun is directly in line with the lens, it shines straight through an opening in the top of the cylinder. As the sun shifts, the light comes in at an angle, creating shadows within the cylinder. Sensors inside detect the shadows and feed the data on their position to Kayser’s computer, which directs the motorized frame to adjust to properly align the lens. 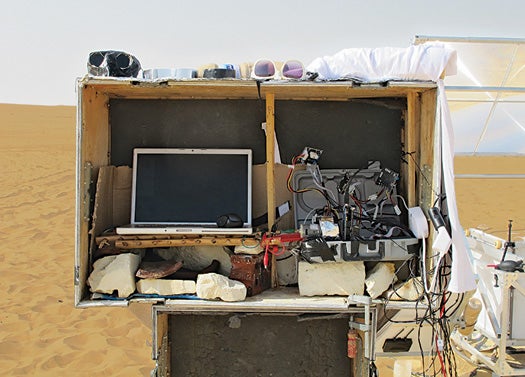 The printer’s motors, the electronics, cameras and a laptop all run on batteries charged by the solar panels

Kayser first designs the object he wants to print in a CAd program. His computer sends instructions to the printer, which works from the bottom up. After a layer has cooled into glass, he adds more sand to the sandbox in the center of the machine and flattens it out, and the printer begins heating the next layer. Kayser’s first major piece, a bowl, took about four and a half hours to print.

Two photovoltaic panels, one on either side of the machine, keep the printer powered. since the panels are attached to the same arms as the lens, they also benefit from the sun tracking, which ensures that they always get direct light.